Rotating crops around your plot, whatever its size, will help avoid the build-up of pests and diseases, increase fertility and enable you to keep your soil in excellent condition. Vegetables are usually divided into three groups that share the same cultivation needs.

Within the demands of space and the desire to keep the garden looking attractive, it is worth trying not to mix the elements from each group and, instead, sequence them in the following order:

Group one: legumes. This includes all peas and beans – and the ‘fruit’ vegetables are usefully added to this group, including tomatoes, peppers, cucumbers, aubergines, squashes, pumpkins, sweetcorn and celery.

Peas and beans have the ability of ‘fixing’ nitrogen from the air and leaving a residue of it in the soil. This means that plants succeeding legumes can tap into the extra nitrogen, which will encourage green, leafy growth.

Group two: brassicas. These include all cabbages, cauliflowers, broccoli, Brussels sprouts and kales – all of which benefit from being grown in soil that has just been cleared of legumes.

Add a thin layer of compost before planting and work lightly into the topsoil to encourage extra growth. Swedes, turnips, radishes, kohlrabi, land cress and mizuna are also brassicas and should share the same rotation.

Brassicas are subject to clubroot, which thrives in soil with a low pH, so before planting, lime is often added to soil that is inclined to be acidic.

HOW TO LOVE YOUR LAWN

Group three: roots. Nitrogen will encourage leafy growth at the expense of good roots so root crops usually follow on from brassicas, which will have taken up all the nitrogen left by legumes, and usually no extra compost is added to the soil.

The soil should be worked deeply first to ensure a free root run. This group includes carrots, parsnips, beetroots, onions, leeks and garlic.

In practice, this is the most diverse and confusing group. Carrots and parsnips, for example, grow best in soil that has had no added manure or compost incorporated whereas it’s important to top up the soil with compost for celeriac and potatoes.

Whatever your soil is like, growing legumes of any kind will improve it for future crops. The leguminous vegetables that are easiest to grow in British gardens are peas, broad beans (see column, right), French beans – both dwarf and climbing – and runner beans.

All legumes host bacteria – rhizobium – that can convert the nitrogen that makes up around 78 per cent of our atmosphere into a form that can be easily absorbed by plants. In return, the plants feed the bacteria sugars.

Nitrogen is essential for green, new growth in plants but too much creates an excess of soft, sappy growth, which in turn attracts aphids and fungal problems.

Hence a legume crop every two years (three growing seasons) maintains the right balance if they are followed by brassicas over the subsequent autumn and winter, and by root crops after that. 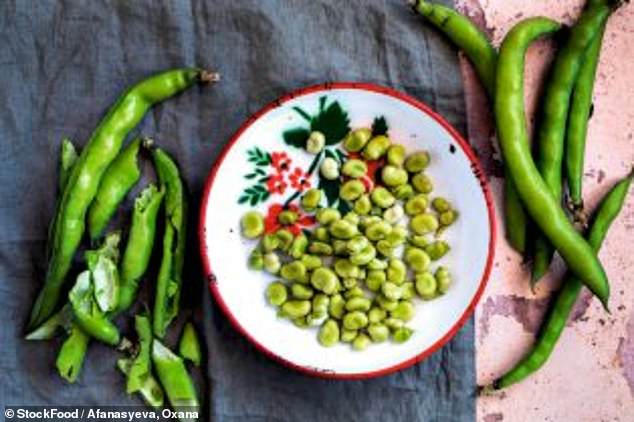 Monty said legumes can be sown a double row 30-45cm apart, as early as October for a spring harvest (file image)

These legumes are delightfully straightforward to grow. They are very hardy and can be sown as early as October for a spring harvest, although I also sow on the first day that the soil can be worked in spring – as soon as it is dry enough to rake without the soil sticking to the tines and does not feel cold to the touch.

I follow this with another couple of sowings thereafter until June. A double row 30-45cm apart is best, with the beans planted 23cm apart down the row, and 90cm is necessary between each double row to allow room to pick.

Although broad beans are free-standing, they will need support to stop them being blown over. Firmly stick a cane every few feet along both sides of each row and stretch string between the canes so that the beans are trussed upright.

Although unsightly, blackfly do little harm. They are attracted to the soft growth at the top of plants in midsummer, so pinch these off once you see blackflies collecting.

Broad beans are best when small and will soon grow too fast to keep up with. Once larger than a fingernail, the beans are better blanched and skinned before cooking.

Runway realness: How fashion design is infiltrating the home

Fitbit and Will Smith team up to put health first