Super salvias: For a final flourish of autumn colour plant salvias, says Monty Don – they can be grown from seed and, with a little care, will last for years

By Monty Don For The Weekend Magazine

The first frost – which often comes in around now on the Welsh Borders – is all it takes to make me realise how precious the last few flowers of autumn are. Of this small band the salvias are shining their brightest.

I say ‘the salvias’ as though I have a large collection of them. I do not. But I do have three different flowering types. My favourite is Salvia guaranitica. I have S. g. ‘Blue Enigma’ and the flowers appear blue, but are a deep and lovely violet. The flower tube is a gleaming satin but the lips are covered in velvety down. They start flowering in June in a warm year, although as late as August if we have a cool spring. I was given my original plant as a cutting 20 years ago and I must have taken hundreds of cuttings from it since.

S. guaranitica comes from South America and as this is near the Equator, it has very little variation in the timing of day and night throughout the year. So unlike all northern hemisphere herbaceous plants, the diminishing daylight does not limit its flowering, but cold will stop it in its tracks overnight.

The secret of keeping it going from year to year is to take cuttings in late summer from non-flowering stems – the shoots that break at 45° root easiest – to plant out the following June. You can also take cuttings from new growth in April. Although it can happily survive a modest winter – especially if you have a southern, sheltered garden – I dig my parent plant up each November, cut it back hard and put it in a container in the greenhouse to rest. It does well on clay loam and will grow to 3m tall in a warm, wet year.

For a true-blue salvia, S. patens is your best one. It is hardy, especially on well-drained soil, although a mulch of bracken or even just heaped leaves will ensure its survival over winter. It has pale green leaves and the royal-blue flowers are carried in pairs. S. p. ‘Guanajuato’ has bigger flowers – each up to 8cm long. ‘Cambridge Blue’ is paler blue, and ‘White Trophy’ is white, although this seems perverse as the whole point of Salvia patens is its blueness.

Salvia patens is easily grown from seed, sown in spring under cover. It also forms tuberous roots, and these can be lifted and stored in a dark, frost-free place. Don’t let the tubers dry out and store in leaf mould or vermiculite, re-dampening every few weeks. They can be potted up and grown on in a greenhouse from mid-February.

I have Salvia elegans ‘Scarlet Pineapple’ growing in a large pot. It is a late-flowerer and a hit of frost reduces it to soggy black rags, so a conservatory or porch is best. If you water and feed it over winter, it’ll keep flowering until spring. I move it to a greenhouse as soon as the weather looks chilly, where it flowers happily until Christmas. The leaves smell deliciously of pineapple and the flowers are a brilliant scarlet, so it is worth any trouble with seasonal changes. It fares well in thin soil and needs much less water than other species. It is easy to root cuttings from side shoots which are best left more or less unwatered in a coldframe or greenhouse until late spring and then potted on to enjoy any warmth.

How to care for your lawn

■ Now is when I start to prepare my lawn for spring, starting with a good scratch using a wire rake with spring tines. This will pull out all the ‘thatch’ or dead grass and roots that accumulate during growing, and loosen any moss.

■ Gather all this up and add it to the compost heap. This can leave a bald-looking lawn, but it quickly recovers. Really bare patches can be sprinkled with grass seed, which will germinate this month.

■ Next give the lawn a good spiking. On a small lawn or a path, a fork is ideal but you could hire a mechanical machine or a gadget to do it in larger areas. Aerating lets air in and loosens the ground for the roots to grow.

■ Brush sharp sand into the holes to improve drainage and encourage roots to grow deeper, which helps in droughts.

■ Finally, raise the mower blades for the rest of the autumn to give the grass a protective coat for the winter. 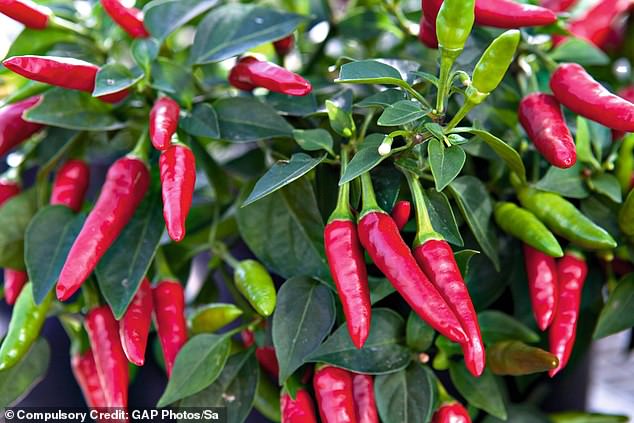 This, surprisingly late in the year to the uninitiated, is the season of chillies (pictured)

This, surprisingly late in the year to the uninitiated, is the season of chillies. Given heat and a little extra light, they will in fact go on producing fruit all year round, if grown indoors. But if you are growing them outside or in an unheated greenhouse, October is the culmination of chilli season.

The seeds should be sown in March, or even mid-February if you have a heated greenhouse, and kept as warm as possible.

I prick them out from the plugs into 8cm pots and then into their final terracotta pots that are 18cm wide. This is on the small side, and I’d use bigger ones if I had them.

Over the years I’ve found that chillies need regular watering as they are growing and setting fruit, but once the fruit has grown they ripen better and faster if they are kept pretty dry.

They need as much heat and sunshine as possible so if outside, use a south-facing, sheltered spot. They are best watered every morning and not after about 5pm as they’re prone to fungal diseases, and shouldn’t go into the evening damp. A high-potash feed will make a big difference to flower and fruit production, and once a week I give them a liquid seaweed or comfrey feed.

Rethinking the way we bring design into the home

A VERY PRICKLY ISSUE: Not everyone agrees but thistles add elegance and attract pollinators

‘No longer an exercise in blissful ignorance’: Eco-friendly homeware buys

Sole survivor of Hollywood’s golden age? The hotel that has seen it all

From swimsuit to bomber jacket: Mouni Roy shows what to pack for your honeymoon | The Times of India