Though the housebuilder expects the Bank of England’s base rate to increase again this year, it said that mortgage costs would remain cheap and more appealing than renting a property.

The FTSE 100 firm added that as long as the housing market remains relatively stable, it expects to build more homes than it did last year and see average selling prices carry on outpacing the rising costs of building materials.

Buoyant market: FTSE 100 firm Taylor Wimpey said that as long as the housing market remains relatively stable, it expects to build more homes than it did last year

This is despite early signs that fewer Britons are buying properties amid a major cost of living crisis, with inflation at its highest level in three decades and house prices surging to record amounts.

Property industry experts have also blamed the decline in transactions in recent months on rising interest rates and the expiration of the UK Government’s stamp duty holiday in England and Northern Ireland last September.

However, the value of Taylor Wimpey’s total order book and net private sales rate between January and March was larger than during the same period in 2021.

Alongside this, it revealed that its revenue skyrocketed by nearly £1.5billion to within touching distance of its pre-pandemic level last year, as the lack of building site closures helped the number of home completions rise by over 4,400.

The average selling price of these new builds rose by £12,000, helping boost the firm’s operating profit by 175.9 per cent to £828.6million and net cash to a forecast-beating £837million.

Thanks to this solid performance, bosses at the High Wycombe-based group have announced a final dividend of 4.44 pence per share and a share buyback scheme of £150million, half of which is set to be paid by early June. 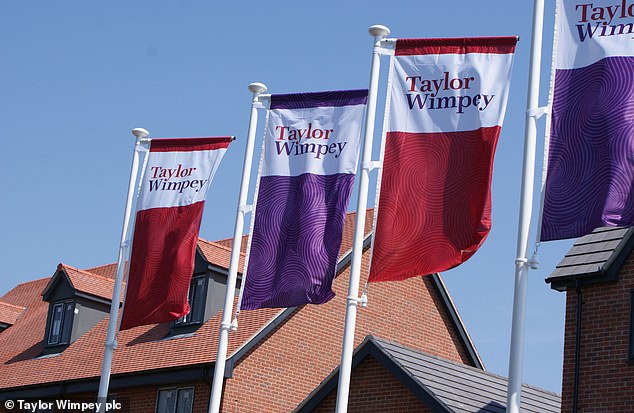 Healthy trade: Taylor Wimpey declared that from January to the end of February, the value of its total order book and net private sales rate was higher than during the same period in 2021

Chief executive Peter Redfern said: ‘Demand for our homes remains strong, and we continued to drive significant margin improvement in 2021, as we optimise selling prices and maintain our strong focus on cost efficiency.’

Redfern, 51, is due to step down from his leadership role in late April after nearly 15 years at the helm to be replaced by the company’s operations director Jennie Daly.

He took charge when the current business was formed through the merger of Taylor Woodrow and George Wimpey, but was then faced with the challenge of steering the firm through the global financial crisis of 2008/09.

In his first 18 months in charge, Taylor Wimpey shares plummeted by around 94 per cent and there were considerable fears that the firm would breach its banking covenants. 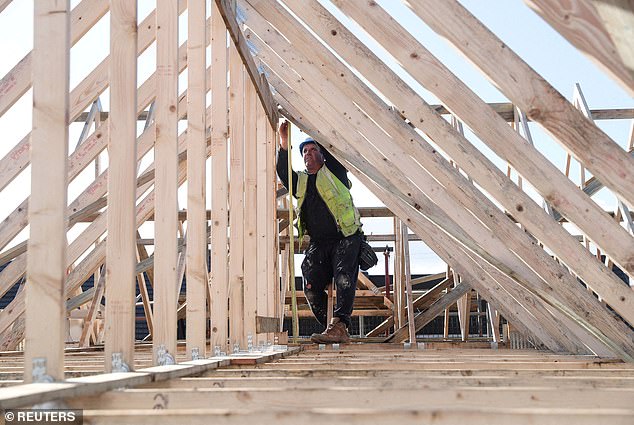 Cost issues: ‘Pressure on supply chains and the availability of materials could have an impact on build costs moving forward,’ eToro analyst Mark Crouch has warned

Yet after selling the group’s North American division for £593million to a property investor, refinancing its debts and conducting a highly-subscribed share issue, the firm started on its path to recovery.

Thanks to the rebound in property transactions and prices, the Help To Buy Scheme, and more lately, the coronavirus pandemic, the company is now Britain’s third-largest housebuilder.

Daly will take charge of a firm in rude health, although the value of its shares remain less than half their apex in 2007 and fell 4 per cent to 138.55p on Thursday.

Mark Crouch, an analyst at investment platform eToro, has also warned that Taylor Wimpey’s ‘strong foundations may be put to the test this coming year’ from a number of serious factors.

He remarked: ‘Geopolitical tensions caused by Russia’s invasion of Ukraine combined with macro-economic factors and the continuing fallout from coronavirus will need to be managed and monitored closely by the new CEO Jennie Daly.

‘Pressure on supply chains and the availability of materials could have an impact on build costs moving forward, and inflationary pressures generally are likely to mean interest rates start to move steadily upwards.

‘Taylor Wimpey will hope that these pressures will be offset by the continued strong performance in overall house prices.’

The publication of the company’s annual results comes a day after fellow British housebuilders Persimmon and Vistry also declared impressive growth in revenue and profits on the back of surging demand for its homes.

Even with the outbreak of war in Ukraine and higher costs of building materials, both businesses stated they had a healthy forward sales position of over £2billion each and were optimistic about their trading outlook for the coming year.

Young Arabs swipe to fintech as saving, investing takes off

Increase Employee Retention With These 4 Tips

Apple Was Facing Intense Pushback From Employees. Its Response Is an Example for Every Business

An Ignored Megatrend Will Power This Fund’s 9.8% Dividend For Decades

Amazon’s department-store plans are less surprising than they appear

This Company Has a Way to Replace Plastic in Clothing

Hummingbirds can smell their way out of danger

Malaika Arora, Arjun Kapoor to Tie the Knot in Nov or Dec 2022 in Intimate Wedding: Report

Exclusive! Divya Dutta: The roles that heroines are doing now, I have been playing those for the past 15 years – Times o