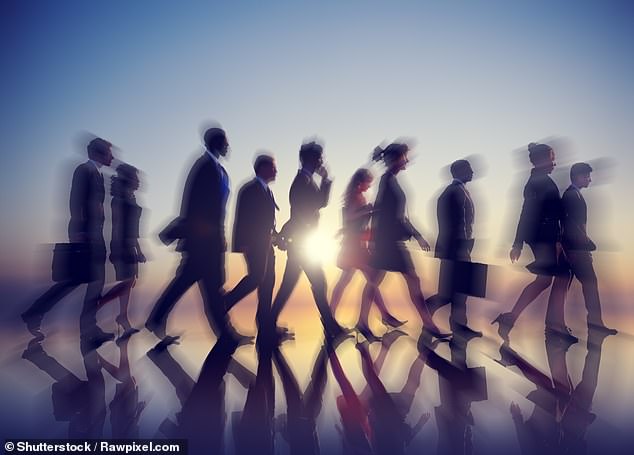 By Rachel Rickard Straus For The Mail On Sunday

Millions of employees are jumping ship as a result of their experiences at work during the pandemic, a new survey suggests.

As many as 29 per cent of workers plan to change employer – or have already done so – since the start of the pandemic, rising to 40 per cent for those aged 18 to 34.

Seeking out a higher salary was the most common reason, followed by a better company culture and a more generous benefits package.

Employment trends: In the three months to September this year, there were 1.1 million job vacancies in the UK

Of those looking to move, 20 per cent said they were unhappy their current employer did not support their mental health sufficiently during the pandemic, the survey by employee benefits provider Unum UK found.

As many as 46 per cent said they would resign or want to resign if their employer asked them to come back to the office full time after working from home during the pandemic.

However, workers surveyed were twice as likely to be happier at work now than before the pandemic.

Workers in the US have been quitting their jobs in droves in a trend that has been branded the Big Quit or the Great Resignation. The survey findings suggest a similar movement may be playing out in the UK jobs market.

In the three months to September this year, there were 1.1 million job vacancies in the UK – the highest number on record.

Last week, the Office for Budget Responsibility forecast that unemployment as a result of the pandemic would peak at 5.2 per cent.

It had previously predicted at the pandemic’s height that unemployment would hit 12 per cent.

That means more than two million fewer people will be out of work than previously feared.

Science and technology lifts the gloom for property investors

Workers on the march

Uber, DoorDash and similar firms can’t defy the laws of capitalism after all

Jet Airways All Set to Get Its Wings Back; Domestic Operations Start in Q1 2022

Abu Dhabi Aims For Guggenheim Effect To Bolster Its Cultural-Tourism

Travel recovery bolsters SSP sales to half of pre-Covid levels