A possible comeback to the FTSE 100 by Britain’s most controversial housing boss was yesterday greeted with incredulity.

Jeff Fairburn, whose name became synonymous with executive greed due to his enormous bonuses, was at the weekend at the centre of speculation he could be parachuted in to lead Footsie property giant Taylor Wimpey, whose long-term boss Pete Redfern last week announced plans to step down.

Speculation was triggered by activist investor Elliott Management, which published an open letter last week calling for a shake-up of Taylor Wimpey’s management, adding that it had secretly built up a large stake in the group and was now among its five biggest shareholders.

Ousted: Fairburn was forced to step down as Persimmon boss after his £75m bonus package sparked outrage

The feared US hedge fund has pushed for Redfern’s replacement to be recruited from outside the company and for new non-executive directors to be brought in.

Elliott’s move sparked conversations about whether an overhaul in Taylor Wimpey’s board room could see Fairburn, 55, make a shock return to the FTSE 100 four years after he was ousted as boss of rival housebuilder Persimmon.

His exit followed outrage over his £75million bonus package, which was paid out after the Government’s taxpayer-funded Help to Buy Scheme fuelled a bonanza of new home sales.

However, a spokesman for the High Pay Centre (HPC), a think-tank that tracks the pay of top executives, said installing Fairburn at Taylor Wimpey would be ‘totally out of touch with how most people would like to see a major company acting’. 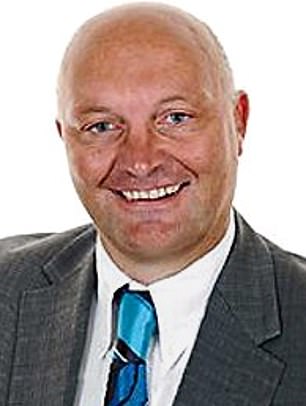 Reunion: Dave Jenkinson could also be joining Taylor Wimpey’s board

A spokesman for the HPC said: ‘It seems farcical that Taylor Wimpey would want to bring in a figure like Jeff Fairburn to head their company.

‘Too often in the upper echelons of business and politics in this country we see individuals, who fail in their roles or violate moral standards, make a brief departure from public life only to get a second or third chance when their mates think the dust has cleared.’

Meanwhile, Justin Urquhart Stewart, co-founder of investment manager 7IM, said Fairburn had ‘a question mark’ over his track record, which in turn could affect the reputation of Taylor Wimpey should he take the top job.

‘The brand is really important. The property market is going into a really difficult time over the next few years and trust in how these businesses are run is going to be crucial.

If you have someone who is seen as being slightly less than a safe pair of hands, I think investors may take umbrage’, Stewart added.

Fairburn’s bonus fiasco resulted in a wave of condemnation from politicians, corporate governance experts and charities.

Critics said the sum was a classic example of corporate greed, with Nicholas Wrigley, Persimmon’s chairman at the time, resigning after saying he regretted not capping the bonuses.

Fairburn failed to help matters after he stormed out of a BBC interview in October 2018 after being asked questions about his bonus.

In a bid to assuage public anger following the debacle, Fairburn said he would donate most of the multi-million-pound sum through a charitable trust.

However, the details of such a trust or any donations have yet to be made public.

The Charity Commission, which regulates organisations in England and Wales, also has no record of any charity bearing Fairburn’s name, despite him insisting last year that a trust had been set up in 2018.

Following his ousting at Persimmon, Fairburn took the reins of Berkeley DeVeer, a private developer of houses across Yorkshire and the North East of England.

Fairburn became its chief executive in January last year after buying a 50 per cent stake in the group for an undisclosed sum.

Shortly after taking charge, he was on the acquisition trail, teaming up with Elliott to snap up larger rival Avant Homes in April.

The swoop was seen as a sign that Fairburn may be plotting a return to the top of the UK’s housebuilding sector, while his prior relationship with Elliott through the Avant deal has raised suspicions he could be the fund’s top pick to take over at Taylor Wimpey.

Fairburn started at Persimmon in 1989 as a quantity surveyor for its Yorkshire business.

Under his leadership, Persimmon became a stock market darling with booming profits, including a record £1billion in 2018, a surging share price and big dividend payouts.

Apart from the pay row, the firm became embroiled in a string of scandals that created headaches for Fairburn and his successor, Dave Jenkinson.

Jenkinson commissioned an independent review into Persimmon’s building practices after a number of complaints from customers.

The review found that under Fairburn the culture at the builder had led to shoddy workmanship and ‘potentially unsafe’ homes being built that exposed customers to ‘intolerable’ fire risks.

Adequate fire protection in properties has been a key issue in British construction since the 2017 Grenfell Tower disaster which killed 72 people.

The company was also caught up in an industry-wide probe into leasehold charges, with an inquiry by the Competition and Markets Authority finding that many housebuilders, including Persimmon, had mis-sold leasehold properties to customers.

Jenkinson, 54, who was paid over £40million through the same controversial bonus scheme that brought down Fairburn, is also considered to have a shot at the Taylor Wimpey top job meaning that the two former Persimmon bosses could find themselves rivals for the chief executive’s corner office.

Will web3 reinvent the internet business?

MARKET REPORT: Footsie starts 2022 on a high as airlines take off

All manner of industries are piling into the hydrogen rush

The anatomy of a growth scare

How to Ensure Business Group Participation, Alignment, and Results