By Ruth Sunderland Business Editor For The Daily Mail

Marks & Spencer is about to announce six guest brands in clothing and footwear as part of the drive by chief executive Steve Rowe to transform the business after the pandemic.

The other signings are Fat Face, Jones Bootmaker, and kidswear brand Frugi.

A sign of the times: The retailer is spicing up its fashion by curating a selection of brands it feels are relevant to its customers

The retailer is spicing up its fashion by curating a selection of brands it feels are relevant to its customers. These include Hobbs and Phase Eight, both popular for smart frocks and ‘occasionwear’.

Dresses from Ghost, where M&S has a collaboration agreement, and Nobody’s Child, have proved a hit with fashionistas.

Marks is also offering lingerie from Sloggi and Triumph alongside its own underwear.

The initiative to act as a platfom for other labels is known as ‘Brands at M&S’ and was launched in the spring.

As well as clothing, Marks is expanding its beauty offer to include brands such as Boucleme. It has also done deals with kids’ stationery brand Smiggle and Clarks shoes.

‘Brands at M&S’ is mainly online with an in-store trial in Stratford in east London, but is being rolled out on an experimental basis in Argyle Street in Glasgow, Bluewater, Cheshire Oaks, Manchester and the Metro Centre in Gateshead. 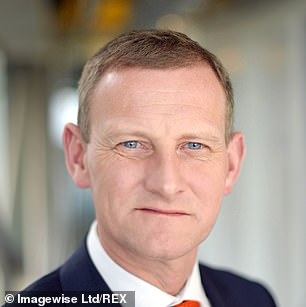 M&S is also showcasing its own brands and in the autumn will be boosting its in-house labels Autograph, athletic wear Goodmove and Per Una, which this year celebrates its 20th anniversary. It will later this year launch its first collection from Jaeger, after buying the renowned British fashion name in January for £6m.

The much-loved store chain has seen its market value tumble in the past five years as it has been hit by competition from high street rivals such as Zara, as well as from online operators.

Over the past three years, Rowe and chairman Archie Norman have been engaged in a plan to restore the business to sustainable growth by ‘facing the facts’ the company had previously failed to address.

Their strategy includes revitalising clothing and home, a £750m food delivery deal with Ocado and the reshaping of the store estate, shutting down shops that are in the wrong places and opening new ones.

M&S shares have risen by 12 per cent this year and the top team hope a recovery is now in their sights. The most recent annual results show that clothing and home was badly affected by lockdown, with net revenues down by 31.5 per cent and an operating loss of £129.4m.

However, online growth of 53.9 per cent was very strong and the pandemic has accelerated the shift towards digital. Nearly 2m new customers last summer clicked on M&S. com, which has 13.5m visitors a week. There was a 200 per cent increase in the numbers downloading the M&S app last year.

Early evidence suggests the guest brands attract new customers and encourage people to shop more frequently. Rowe’s aim is to deliver an ‘omnichannel’ clothing and home business, so that the stores and the website work together in tandem, bringing benefits to customers not available from online only retailers.

Another innovation is digital click-and-collect, so customers no longer have to wait at a desk but can instead use self-service digital screens. A trial in 22 shops is being rolled out to a total of 78 branches by Christmas.

Nearly half of renters ‘have never insured their home contents’

‘I was wrong’: Omicron wrecks CEOs’ plans for office return – Times of India

How to Prevent Rage Quitting in Your Business

With Holidays Here, How Much Longer Will This Supply Chain Crisis Last?

How would an energy embargo affect Germany’s economy?