Wickes shares sank to a record low after it warned of weakness in the British DIY market.

The stock tumbled 18 per cent, or 30.4p, to 138.6p as the firm reported demand for DIY and other home improvements was showing ‘signs of softening’.

Sales in its first half were just 0.8 per cent ahead of the previous year. This was dragged by a 0.2 per cent slide in sales at its core DIY business in the second quarter.

Shares slump: Wickes stock tumbled 18.5% as the firm noted demand for DIY and other home improvements was showing ‘signs of softening’

Wickes said customers were reacting to the ‘uncertain macroeconomic backdrop’.

As a result of the slowdown, Wickes predicted a full-year profit of £72million to £82million, lower than market forecasts of around £87million.

Analysts at Liberum said the profit downgrade was ‘disappointing’ but reflected a ‘tougher’ consumer market.

As a result of the lower forecasts, the broker cut its target price for Wickes to 360p from 425p.

DIY retailers did well during the pandemic as consumers spent more on home improvements.

But with prices soaring, sales are under pressure as the end of restrictions shifts consumer spending away from DIY and towards eating out and travel.

The slide came amid a wider downturn in retail stocks after a profit warning from US behemoth Walmart sparked renewed fears of slower consumer spending. 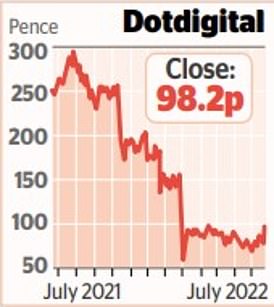 The online marketing group reported that revenues for the year to the end of June were at the top end of its expectations, rising 8 per cent to £62.8million.

The firm said the shift to digital marketing accelerated across industries, increasing demand for its services and leading it to hire more staff.

Dotdigital expected its full-year profit would be ahead of market expectations.

Meanwhile, inflation weighed heavily on Reach, owner of the Daily Mirror and Daily Express, which tumbled 25.9 per cent, or 30.3p, to 86.7p after profits in the six months to June 26 dropped by nearly a third to £47.2million.

The firm blamed the profit slide on an unprecedented rise in printing costs, up 65 per cent year on year.

Supermarket sandwich maker Greencore reported 35 per cent revenue growth to £486million in the three months to July 1 as demand for convenience food recovered.

The group also announced a £10million buyback programme as part of plans to return £50million to shareholders. The shares were down 2.8 per cent, or 3p, at 104.3p.

Oxford Biomedica rose 0.5 per cent, or 2.5p, to 459.5p after inking a supply deal with an unnamed US biotech firm for its LentiVector platform, which is used to develop gene-based medicines.

Private equity group Bridgepoint surged 4.9 per cent or 11.2p, to 239.6p after a strong set of interim results beat expectations.

Profits for the six months to the end of June rose to £51.9million from £42.3million a year ago, boosted by fundraisings and a strong performance from its investments, which include Burger King in the UK and retailer Hobbycraft.

The Media Is Falling In Love With These 7.5% Dividends

Explainer: What caused Amazon’s outage? Will there be more?

The Must Have Resume Feature for Fall 2021: Employees’ Vaccination Status

NFT and esports: One of the most promising collaborations of 2022

Meta, formerly Facebook, is reportedly planning retail stores as it pushes into metaverse