Shares in Smith & Nephew gained after a doubling of profits offset the unexpected exit of its chief executive.

It came as it said Roland Diggelmann will step down by mutual agreement at the end of March.

On the mend: Smith & Nephew, which makes medical products such as bandages and knee replacements, rose 7.5% after its 2021 profit jumped to £437m

He will get a £4.5million pay-off including a year’s salary, which in 2020 was around £1.3million, and a share of the executive pension pot.

The 55-year-old has been in the role for less than three years after replacing Namal Nawana, who left amid claims he was underpaid.

Diggelmann will be replaced by Deepak Nath, the former head of diagnostics at German firm Siemens Healthineers, who will be paid £6.3million in share awards as a ‘golden hello’ and a £1.1m annual salary before bonuses.

‘It is hardly the most ringing endorsement when a company announces the departure of its chief executive and the subsequent share price gain catapults the firm to the top of the day’s FTSE 100 leaderboard, but that is what is happening,’ said AJ Bell investment director Russ Mould.

He said it could be ‘a beneficiary of anything like a return to normality’ as hospitals recover from the impact of Covid-19. 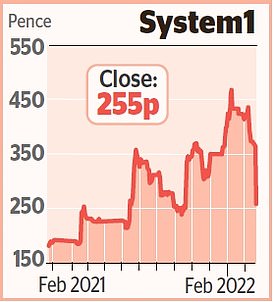 Small-cap marketer System1 lost nearly a third of its value after a profit warning.

It said a ‘sudden and unanticipated’ drop in its sales forecasts for the US meant revenues for its fourth quarter would be over £1million lower than previously expected.

And while it was taking ‘rapid action’ to shore up its US business, profits for the year to the end of March were predicted to fall £1million short of estimates.

One outlier was digger Petropavlovsk, which dropped 0.4 per cent, or 0.05p, to 13.21p as gold prices softened.

Airline Wizz Air, which serves multiple routes in eastern Europe, was also under pressure and sank 1.4 per cent, or 58p, to 3988p.

The firm was ‘not aware’ of any suppliers reducing deliveries to its THG Beauty division despite reports that Dermalogica, a skincare brand owned by Unilever (down 1.5 per cent, or 57p, at 3793p), was doing just that. The shares fell 1.8 per cent, or 1.9p, at 101.5p.

Profits at mining giant Antofagasta more than doubled amid a spike in global copper prices.

Easyjet rose 1.6 per cent, or 10.8p, to 669p amid hopes that a recovery in travel stocks could see it re-enter the FTSE 100 in next month’s reshuffle.

‘The focus on short-haul travel puts it in a better position than its long-haul rivals when it comes to capturing returning passengers, said Hargreaves Lansdown analyst Susannah Streeter, who said it could benefit from ‘pent-up travel demand’.

It predicted a £74million hit from a project to build an anti-missile defence system for the US Army in Poland.

Meanwhile, United Utilities and Severn Trent were underwater after a bleak appraisal from analysts at Jefferies.

“Backdoor” Infrastructure Stocks To Buy In 2021

Should We “Buy The Dip” Again? Watch These 3 Things.

Trade-off between biodiversity and food security in land use

If You Answer Yes to Any Of These 7 Questions, Your Workplace Is Probably More Toxic Than You Think