The gains came as prices of Brent Crude passed $88 a barrel, for the first time since October 2014.

Another oil benchmark, West Texas Intermediate, was also trading at around a seven-year high close to $86 a barrel.

The latest surge followed an attack by rebels in Yemen against the United Arab Emirates, which raised fears of supply disruption. 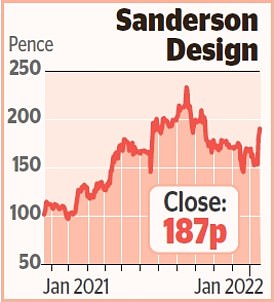 Interior design group Sanderson surged to a three-month high as demand for its UK-made fabrics and wallpaper rose following Brexit and disruption to supply chains.

It expects profits for the year to the end of January to be at least £12m, ‘significantly ahead’ of expectations and up from £7.1m last year.

The group also highlighted foreign success, with sales in North America up 40pc year-on-year, where it is enjoying ‘very strong’ orders. Shares rose 21.9pc, or 33.5p, to 187p.

Brent’s rally means it has risen around 60 per cent in the last 12 months and over 350 per cent since April 2020, when its value plunged to just under $20 a barrel.

Some analysts, including Goldman Sachs, have predicted that the prices of oil could climb back to $100 a barrel this year as the perceived threat of Omicron diminishes, allowing the global economy to reopen and kick-start demand for fuel.

The world’s oil market is also facing a supply squeeze unless the OPEC+ group of oil-producing countries, such as Russia and Saudi Arabia, decide to open the taps to meet demand at the risk of prices falling back again.

Political instability is adding upward pressure to oil prices, with the Yemen conflict and rising tensions between Russia and Ukraine worrying energy markets.

Markets in London were under pressure after rising to a two-year high on Monday, with some traders looking to take profits following the rally.

GlaxoSmithKline shares fell 0.4 per cent, or 6.6p, to 1701.2p, as it emerged that it is in talks with the sovereign wealth funds of Qatar and Singapore to fend off Unilever’s takeover efforts.

Cybersecurity group Darktrace inked a multi-million dollar deal to provide its artificial intelligence technology to one of the world’s largest airlines.

The airline, which operates around a thousand flights each day to over 100 destinations, will use Darktrace tech to protect the business from ‘sophisticated’ threats. Darktrace rose 5 per cent, or 20.6p, to 433.8p.

The firm noted that record gas prices in Italy, one of its key markets, and better than expected production helped lift its revenues to £364million, up from £247million in 2020.

Its status as a ‘preferred technological enterprise’ has been extended and as a result, its annual corporation tax rate will be lowered to 12 per cent from 23 per cent.

Total employment in 9 select sectors rises to 3.10 crore in July-Sep 2021 – Times of India

Instead of Asking “What Are You Thankful For?” This Year, Try This

The allure of betting on mergers

Brazil too important a food producer to depend on fertilizer imports, industry says

ROKA Is The Prescription Eyewear Brand For Active Lifestyles

Omicron Is Muddying Up Wilco, DMB Shows in Cancun. Good Luck Getting Refunds