MARKET REPORT: Rio Tinto lets Mongolian government off the hook over a £1.7bn loan in bid to push through Gobi Desert mine deal

Mining giant Rio Tinto enjoyed early gains after it agreed to forgive a multi-billion pound loan to the Mongolian government in a bid to push through a major mining project in the Gobi Desert.

But the shares eventually closed down 0.1 per cent, or 6p, to 4748p after the FTSE 100 firm wrote off the £1.7billion ($2.3billion) loan as part of a new deal to finish development of the massive Oyu Tolgoi copper-gold mine.

The debt forgiveness forms part of a wider proposal to get the project back on track after it was beset by delays and disputes over financing, damaging relations between Rio and the government in Ulaanbaatar.

Delays: Rio Tinto has written off  a £1.7bn loan it made to the Mongolian government as part of a new deal to finish development of the massive Oyu Tolgoi copper-gold mine (pictured)

Other parts of the deal include scrapping a controversial funding agreement for the project, which some Mongolian politicians had demanded be altered.

The company’s concession followed a meeting between Rio’s chief executive Jakob Stausholm and Mongolian prime minister Oyun-Erdene Luvsannamsrai as well as several members of parliament who had previously opposed the project.

Oyu Tolgoi, one of Rio’s most important assets, is running almost two years behind schedule while the budget has ballooned to around £4.9billion from £4billion previously. 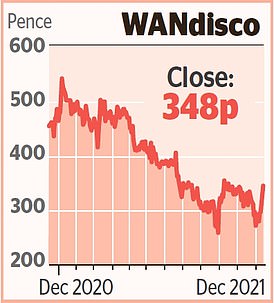 Software firm WANdisco hit a two-month high after landing a contract with a top-five UK bank.

The cloud computing specialist will help transfer around 500 terabytes of the bank’s data to a remote database managed by Amazon’s IT arm.

There is also potential for more data transfers in the future, WANdisco said, noting that the bank was shifting its data to explore potential uses of artificial intelligence going forward.

Upon completion it will be one of the biggest copper mines in the world, producing around half a million tons a year to be used in electronics, cars and household appliances.

The Mongolian government has a 34 per cent stake in the project and has been funding its portion of the development costs through loans from Rio and will receive income from the mine once the debts are repaid.

However, the new deal to write off the debt means the government will begin receiving payments from Oyu Tolgoi earlier than expected.

The agreement also means the production at the site’s underground mine is now due to start in the first half of 2023.

Stocks came under pressure after Boris Johnson warned of a ‘tidal wave’ of Omicron infections in a televised address on Sunday night, raising fears the new variant and restrictions could pump the brakes on the UK economy.

Surging cases of the variant have also dampened predictions that the Bank of England will raise interest rates later this week.

Fellow budget airline Wizz Air dropped 4.2 per cent, or 180p, to 4113p after analysts at HSBC downgraded the stock to ‘reduce’ from ‘hold’.

Rolls-Royce, which makes jet engines for passenger planes, also shed 4.8 per cent, or 5.86p, to 116.94p amid worries a slowdown in travel will dent demand from its customers.

Outsourcing giant Capita plunged 18.7 per cent, or 8.44p, to 36.76p after its revenues stalled amid losses from some of its contracts.

Revenues for the 11 months to the end of November were up just 0.6 per cent year-on-year at £2.9billion, as earnings from its contracts in the public sector were offset by drops in business from private firms.

SThree, a recruiter for the science and engineering fields, also tumbled – by 13.2 per cent, or 72p to 474p – as its chief executive headed for the exit.

Mark Dorman will step down at the end of the year, Timo Lehne, managing director of the firm’s German, Austrian and Swiss business, will take over as interim chief executive.

The news overshadowed a record set of results, which saw SThree’s income surge 19 per cent year-on-year to £356million in the year to the end of November.

OnTheMarket upgrades expectations on back of new commercial tie-ups

Media Company Ozy Is Shutting Down As Problems Mount

While the Ukrainian government got millions in crypto donations, crypto exchanges said ‘no’ to Ukraine’s request about freezing all Russian accounts

The booming business of knitting together the world’s electricity grids