Bosses at the North Sea’s largest oil and gas producer have seen the value of their shares soar by nearly £30million this year.

That was more than 12 times the £101million it generated in the same period a year ago as the company cashed in on soaring energy prices.

Gushing profits: Harbour Energy reported a profit of nearly £1.3bn for the first half of 2022, more than 12 times the £101m it generated in the same period a year ago

The latest rally took gains in the share price to 33 per cent this year.

That has added £10million to the value of the 0.9 per cent stake held by chief executive Linda Cook. Her holding is now worth nearly £40million.

The 1.7 per cent stake held by chairman R Blair Thomas has risen by £18million to £71million.

Harbour was formed in 2014 but in 2021 completed a reverse takeover of rival Premier Oil to cement its status as the North Sea’s biggest producer.

As a result of the bumper half-year profits, Harbour said it would add an additional £85million to a share buyback programme originally announced in June, taking the total to £254million.

The strong results came as the firm reported a 40 per cent increase in production during the period, adding that its Tolmount gas project in the southern North Sea had increased the UK’s domestic gas supply by 5 per cent when it was brought online in April.

Analysts at broker Jefferies hailed the ‘excellent’ results and predicted the group’s multi-million-pound share buyback ‘won’t be the last’. 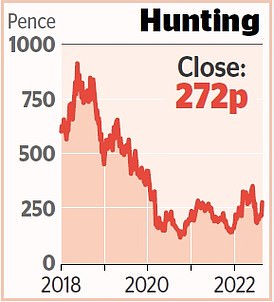 Hunting shares soared after it secured more orders and swung back into profit.

This came following contract wins for an offshore project in China and in the Gulf of Mexico. Meanwhile, Hunting reported a profit of £17.4million for the six months to the end of June, having made a loss of £3million a year earlier.

It also expected to pay £423million in taxes for 2022, around £254million of which will be due to the 25 per cent windfall tax on oil and gas profits announced earlier this year by then-chancellor Rishi Sunak.

Michael Hewson, of trading firm CMC Markets UK, said: ‘Against that backdrop it wouldn’t surprise to see the company target future investment efforts towards its smaller interests in order to diversify its revenue streams, with the directors of the company saying that investment in the UK now comes with elevated fiscal risks.’

Cook said the firm would boost investment in its projects by 30 per cent compared to last year in order to deliver a ‘reliable, domestic oil and gas’ supply for the UK at a time when many were ‘struggling with high energy prices’.

Shares in AstraZeneca inched up 0.6 per cent, or 72p, to 11422p after three of its drugs were approved by Japanese regulators.

The pharmaceutical giant was given the green light for its breast cancer treatment Lynparza and Ultomiris which treats myasthenia gravis, a rare disorder that stops muscles from working properly.

Tagrisso, a tablet used to treat lung cancer – the leading cause of cancer deaths in Japan – was also approved.

Cineworld tumbled 31.4 per cent, or 0.88p, to 1.92p after its second-largest investor offloaded shares.

In a further blow for the world’s second-largest cinema chain, Beijing-based Jangho Group lowered its stake to 11.6 per cent from 13.8 per cent.

How much pocket money do UK children receive?

Shares in Pets at Home fall nearly 6% despite impressive performance

4 Business Books That Will Accelerate Your Success in 2022

Are emerging economies on the verge of another “lost decade”?