HSBC reveals another share buyback as pandemic pain ebbs away and economic rebound leads to profits more than doubling to $18.9bn

HSBC’s profits more than doubled in 2021 on the back of the recovery in the world economy, enabling the bank to reveal a second large share buyback scheme.

The bank said it will now purchase up to $1billion more of its own shares, once it completes its current $2billion share buyback programme, alongside a dividend of 18 cents per share.

HSBC saw post-tax earnings surge from just over $6billion in 2020 to $14.7billion last year, as it achieved substantial revenue growth across all regions.

Boomtime: HSBC saw its post-tax earnings surge from just over $6billion in 2020 to $14.7billion last year as it achieved substantial growth in earnings across all regions

It was additionally boosted by releasing $928million it had set aside at the outset of the coronavirus pandemic for potential loan defaults, which had cost it $8.8billion in the prior year.

At the same time, customer lending balances jumped by $8billion, thanks partly to a huge rise in UK mortgage lending buoyed by the stamp duty holiday, a greater desire among Britons for more spacious housing and low interest rates.

Yet the financial services business noted that the global cut in interest rates, as well as a poorer performance by its markets and securities division, caused its reported revenue to dip below $50billion.

But as central banks have started to raise interest rates in order to combat spiralling rates of inflation, HSBC said the outlook for its net interest income is ‘significantly more positive.’

Should interest rate increases go ahead as the markets currently expect, the bank believes it will achieve its target of having a return on equity of at least 10 per cent one year earlier than anticipated.

To further boost revenue and profits, the blue-chip listed firm is focusing on enhancing its trade in fast-growing emerging markets of Asia, such as mainland China, Hong Kong and India. 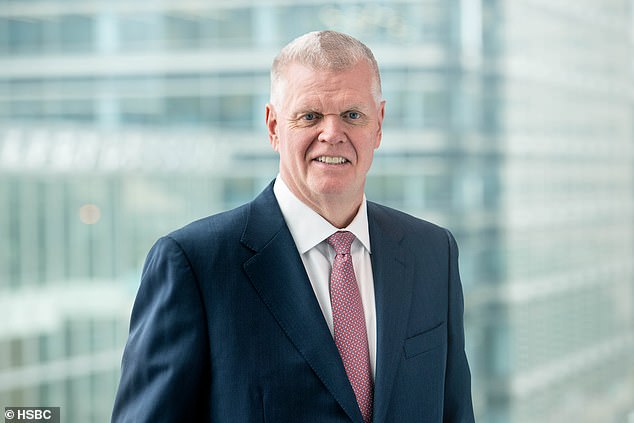 HSBC chief executive Noel Quinn said: ‘We have good momentum coming into 2022 and are confident that we can continue to execute against our strategy.

‘We also remain cognisant of the potential impact that further Covid-19-related uncertainty and continued inflation might have on us and our clients.’

Quinn earned a £700,000 pay rise last year, taking his salary to £4.9million. On top of this, he received a £4.1million long-term performance share award, meaning his overall compensation package was £9million.

Last week, the former bank bolstered its annual bonus rewards by almost half to £298million, while the latter announced $1.4billion in total bonuses for its staff.

AJ Bell’s investment director Russ Mould said: ‘Banks in general are more optimistic about their earnings outlook thanks to rising interest rates in various parts of the world.

‘Higher rates give them more of a chance to increase their net interest margins, the difference between what they earn on loans and pay out on savings deposits.

But he warned that this is ‘not a clear-cut golden goose for HSBC. Its strategy is focused on carving out a bigger position in Asia, and China recently bucked the trend by cutting its interest rates.

‘Fears there could be more pain in the Chinese property sector also clouds its outlook. Furthermore, inflation around the world is causing problems for consumers and businesses – which are its end markets.’

Shares in HSBC Holdings ended trading flat at £5.47 on Tuesday, meaning their value is still around 37 per cent higher than it was six months ago.

Clarks boss Victor Herrero steps down after less than a year

Suspicious trades were made before Goldman’s $2.2 billion acquisition of GreenSky, options experts say

LIC Policy: You can Get Rs 4 Lakh by Investing Rs 29 per Day. Know Scheme, Tax Benefits

Here’s All You Need to Know About Beauty World