As Pfizer forecasts sales of its Covid jab will hit £24bn, Glaxosmithkline risks losing its crown as the world’s biggest vaccines maker

By Matt Oliver For The Daily Mail

Glaxosmithkline risks losing its crown as the world’s biggest vaccines maker after failing to bring a coronavirus jab to market.

The British drugs giant has been left in the dust by rivals during the pandemic, with Pfizer, Moderna, Johnson & Johnson and even nemesis Astrazeneca developing shots used around the world.

Yesterday Pfizer demonstrated the financial fruits of this success as the US firm predicted sales of £24.1billion this year from the jab it developed with Biontech.

WALMSLEY FIGHTS BACK AGAINST RAIDER AS PROFITS DIVE

In an open letter earlier this month, Wall Street raider Elliott – led by Paul Singer  – claimed GSK ‘lacked credibility’ and called for more board members with ‘deep expertise’ in pharmaceuticals.

It also effectively called for Walmsley to re-apply for her own job and disputed plans for the separation of the company’s consumer division next summer. Elliott wants GSK to sell the consumer arm off instead of listing it on the London Stock Exchange. 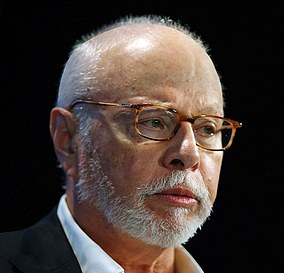 The challenge facing GSK was underlined yesterday as it posted a 7 per cent fall in half-year revenues to £15.5billion and a 33 per cent drop in profits to £3billlion.

But Walmsley hit back, saying her plans have ‘strong’ investor support and that the firm has more board members from scientific backgrounds than many rivals.

She said: ‘We listened hard and many of our shareholders have expressed a very positive view on being owners of this new consumer business.’

Walmsley added: ‘If you look across our board make-up you will see that we have more than the median in the whole industry in terms of presence of science-backed directors.

‘Nonetheless, it is always exciting to see the evolution of boards and we will continue to make sure that ours is the exciting and responsible one with all due governance for all the exciting and positive pathways for GSK ahead.’

Yet while its competitors make hay, GSK has seen its own vaccines business squeezed as countries prioritise Covid-19 jabs over other inoculation programmes.

The firm expects its vaccines business to bring in revenues of about £7billion in 2021, similar to 2020. It means GSK is set to at least temporarily lose its status as the world’s top vaccines company by revenues.

And one analyst predicted the company may have to fight to retain that crown even after the coronavirus pandemic.

The situation piles further pressure on GSK boss Emma Walmsley at a time when she is already fending off attacks from activist investor Elliott Management.

John Rountree, managing partner at pharma consultancy Novasecta, said: ‘GSK has basically lost its vaccines leadership already and it is difficult to see that returning.

‘Messenger RNA [mRNA] vaccines have been proven during the pandemic and they have now taken the front stage – so GSK is going to need to move into that technology in a big way to sustain and grow the business.’

Nicholas Hyett, an equity analyst at Hargreaves Lansdown, also said Astrazeneca’s successful rollout of a Covid-19 vaccine has been ‘a source of some discontent’ at GSK. Astra had never been a major vaccines player before its collaboration with Oxford University to roll out a jab globally. GSK had been seen as an obvious partner for such a deal but the firm decided not to develop a jab at the outset of the pandemic. Walmsley instead offered the company’s adjuvant – an ingredient that boosts the effectiveness of vaccines – to other companies developing jabs, arguing this was the ‘broadest contribution’ the firm could make.

But the offer has not been widely taken up and two firms that did, France’s Sanofi and Canada’s Medicago, are still trialling their vaccine candidates.

Meanwhile, smaller firms such as Moderna, Novavax and Biontech, which worked with Pfizer, have been catapulted into the big leagues thanks to the cutting-edge mRNA technology that is behind their Covid jabs.

GSK is ploughing cash into its own mRNA technology but has yet to bring anything to market.

Walmsley insisted the battle to inoculate the world against Covid is ‘not done yet’ with only 13 per cent of people protected.

‘We are confident that we will be able to contribute at a global scale, including supporting those that need access for an easily transportable vaccine.’

Meanwhile, GSK is hoping the market for non-Covid vaccines will pick up again in the second half of this year as western societies continue lifting restrictions. A big chunk of sales usually come from shingles vaccine Shingrix but these have been dented by the pandemic, as hospitals put off nonessential procedures.

rupay: Visa complains to US govt over India’s backing for RuPay – Times of India

Tips for Starting A Business in A New Industry

Colonial Pipeline As A Case Study On Cryptocurrency Risks

Supply Chain Blues: From Ripples To A Tsunami

The Protest for Justice Continues in Kenosha. It Has Armed Escorts Now