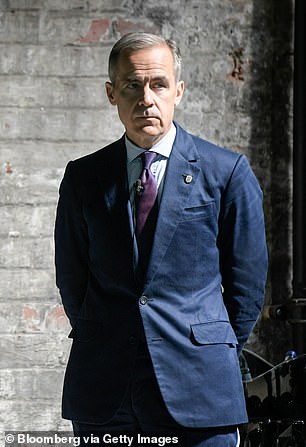 When Mark Carney stepped down as Bank of England Governor to become a climate ambassador for the UN, some in the City thought the world-renowned central banker had settled for a quiet life away from the glare of frontline politics.

But less than two years later and the smooth-talking Canadian is back in the limelight. This weekend, Carney, 56, is acting as Prime Minister Boris Johnson’s finance adviser at the COP26 climate summit. And his specialist subject – the role of giant City banks and investors in the switch to a greener global economy – is set to take centre stage.

Banks including Standard Chartered, Barclays and HSBC have come under heavy fire from protesters, shareholders and even City grandees for providing loans and finance to oil giants, miners, car manufacturers and other industries linked to high carbon emissions.

Meanwhile, asset managers and pension funds are under huge pressure from activists to dump their holdings in polluting firms – and many have.

As if to emphasise the point, last week the American hedge fund Third Point called on Shell to break itself up and split off its oil and gas business.

But Carney, also the UN’s special envoy for climate and finance, has a message for eco-zealots who want an instant fix: abruptly cutting off fossil fuel firms won’t work.

‘It would be great if we could flip a green switch overnight,’ Carney tells The Mail on Sunday in a rare interview. ‘We can’t. It’s very easy to sit there and look at an auto company or a steel company, and say, ‘You’ve got these bad emissions, I shouldn’t lend to you or I shouldn’t invest in you’. But only doing that will not get the emissions down.’

Carney isn’t arguing that climate change is a problem of the future that we can ignore today. Far from it. His theory is that banks and asset managers – ultimately with the help of our savings – can use finance to help and put pressure on companies to shift quickly away from high carbon emissions in favour of cleaner energy.

He also makes the point that hitting the mythical ‘net zero’ – where the amount of carbon being emitted is no greater than the amount being removed from the atmosphere – will be unimaginably expensive.

The latest estimate suggests the world will need to invest $100 trillion to reach net zero by 2050. Carney points out that only banks and other major investors have that sort of money available.

‘An orderly transition [to net zero] is crucial,’ he says. ‘Orderly doesn’t mean a slow transition, but it means coming off fossil fuels as we increase renewables and zero emission sources of energy.’

Banks still lend vast sums to fossil fuel firms. A report earlier this year found that the world’s 60 largest banks have handed out $3.8trillion of finance since the Paris climate deal in 2015.

Carney says: ‘It still is the case that for a period of time, in an orderly but rapid transition, there will be some financing of some fossil fuel assets.’

As well as getting big firms to switch to green energy, Boris Johnson wants homeowners to replace gas boilers with heat pumps and the Government may ask banks to link mortgages to green home improvements in future.

Does Carney worry that green mortgages and a ban on gas boilers might create a divide between rich and poor, with some households locked out of home loans or unable to access affordable heating?

‘I think it’s a concern,’ Carney says. ‘[Banks are] thinking a lot about what role they can play in providing green mortgages to get the emissions down in relation to a flat or a house. There are longer term benefits; the problem is it takes a while to realise those benefits. In the end your heating costs are going to be lower over time.’

Carney says ultimately the Government will have to put its money where its mouth is if Ministers want to accelerate the switch to greener energy. ‘There’s a core role for Government in these situations, whether it’s support for the retrofits or the transition of energy systems, say heat pumps,’ he says.

‘The judgment has to be: is that level of support sufficient for the kind of outlay that people have to pay, and we’re talking about people who don’t necessarily have the type of savings that would be needed in order to do it.’

At COP26, Carney will focus on how the private sector, from banks to pension funds, can create an economic opportunity by financing the $100trillion needed to build infrastructure for renewable energy.

Carney’s own shift from banker to climate change adviser might seem radical, but he was warning about the risks while at the Bank of England.

He knows the nooks and crannies of the banking industry first-hand, having worked at US giant Goldman Sachs for more than a decade.

The Harvard and Oxford-educated banker became the first non-Brit to govern the Bank of England when he was appointed in 2013, during which time he clamped down on banks in the wake of the financial crisis.

Outside of work, he is a devout Everton fan and a keen runner, with a good few marathons under his belt.

But his superstar reputation in finance is worlds away from his peaceful upbringing in rural Fort Smith, a small town next to a national park in Canada’s Northwest Territories.

Carney is charming, even over the phone – it’s clear how the tanned banker earned himself the reputation of being the George Clooney of finance.

We’re talking as he prepares to head for Glasgow – and just days before a major decision on Threadneedle Street on interest rates.

The City is convinced that the Bank of England is poised to hike rates to combat rising inflation, but Carney says he won’t reveal his own views – joking that he would be a ‘terrible’ former central banker if he gave a view.

Would he ever return to frontline central banking? ‘I’m very fortunate to have had the experiences I did at the Bank of Canada and Bank of England,’ he says. ‘I was in those roles for almost 13 years, which is a pretty substantial proportion of my professional life. I think that time has passed.’

When he was replaced as Governor by former Financial Conduct Authority boss Andrew Bailey, some critics thought it was a missed opportunity to appoint the first woman governor.

Carney says he would expect there will be a woman in the top job within his lifetime.

‘[Diversity] continues to be a top priority at the bank – diversity in all its forms. More broadly, in finance, there’s more to be done to close those gaps.

‘You’ll see at COP in terms of the representation of the leaders – whether it’s Alison Rose [NatWest] or Amanda Blanc [Aviva] or Jane Fraser [Citi] – it’s improving in the top leadership of finance. But it still has a long way to go, it needs to remain a top priority.’

Microsoft says it warned Bill Gates about flirting in 2008

Investors Lighten Up In Advance Of Market Holiday

For Years, I Had ‘CEO Disease.’ Here’s How I Recovered

What is the metaverse? A tech CEO who is helping build it explains

Early Homo sapiens groups in Europe faced subarctic climates: New insights into the climatic backdrop for an early wave of dispersal of our species...