London-listed Russian steelmaker Evraz has warned investors about the potential impact of economic uncertainty and risk of imposition of international sanctions following the country’s invasion of Ukraine on Thursday.

The group, Russia’s second largest steel company, saw its share price fall by more than 25 per cent yesterday to levels not seen since the pandemic-induced crash in March 2020.

The stock has bounced back today, rising 17.5 per cent to 201.3p in early trading, after the company unveiled a massive jump in profits thanks to a boom in metals prices.

Bumper profit: Evraz has benefited from rising metal prices, but the war in Ukraine and promised international sanctions on Russia could impact the company

Chief executive Aleksey Ivanov hailed ‘outstanding’ financial results as pre-tax profit more than tripled to $4.2billion in 2021, from $1.3billion in 2020.

‘In 2021, the steel industry was mostly driven by demand-side ﬂuctuations,’ Ivanov said.

‘Steelmakers increased output in anticipation of more robust demand from the construction and manufacturing sectors. Unable to keep up with the accelerated pace of recovery, steel prices rose to their highest in years.

‘Amid the upswing on global markets, Evraz delivered outstanding financial results in the year’.

However, the conflict in Ukraine poses a risk for the company, as the West could impose sanctions targeting Russia’s commodity exports, including steel.

That would impact Evraz, which makes the vast majority of its money from steel and it supplies railways in the US and Russia.

The FTSE 100 company said that, while ‘there have not been direct impacts to date’, the board continues to monitor the situation and the response of international governments.

Who is behind Evraz?

Founded as a small metal-trading business in 1992, its reach extends beyond Russia to the US, Czech Republic, Kazakhstan, Canada and South Africa.

It makes the vast majority of its money from steel and is supplies railways in the US and Russia.

Abramov, 63, owns 19 per cent of Evraz and also has a stake in the world’s biggest nickel producer Norilsk Nickel.

The self-made billionaire has a roughly £5billion fortune and in 2013 bought a £34million yacht from regular business partner and ally Roman Abramovich, who is Evraz’s largest investor with a 28.6 per cent slice.

Read our article on some of the main FTSE 100, FTSE 250 and AIM stocks with links to Russia.

‘The major part of the Group is based in the Russian Federation and is consequently exposed to the economic and political effects of the policies adopted by the Russian government,’ it said in its annual results.

‘Worsening situation related to Ukraine has further increased the economic uncertainty and the risk of the imposition of sanctions.

‘These conditions and future policy changes could affect the operations of the Group and the realisation and settlement of its assets and liabilities.’

Yesterday, London-listed stocks with operations in Russia and Ukraine like Evraz, Polymetal International, Ferrexpo and Petropavlovsk were the biggest losers.

Today, they are topping the risers list as they recover from the slump.

Despite the rebound, shares in Evraz, which is valued at around £2.9billion, remain down by around 70 per cent since the start of the year and well below their pandemic peak of almost 700p in May last year.

Russ Mould, investment director at AJ Bell, said: ‘Results from Russian steel producer Evraz provided an indication of the tricky spot firms with links to Russia are in – with the company just barely acknowledging the conflict, or “geo-political situation” as it euphemistically dubs it, in a statement so thinly worded as to be meaningless.

‘However, after some extremely heavy selling in recent days its shares and those of other firms in the firing line like gold miner Polymetal bounced back.’ 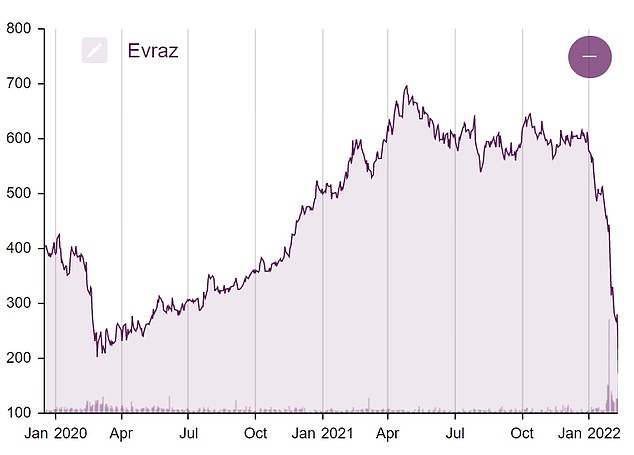 Mark Zuckerberg Wants Facebook to Stop Apologizing So Much. Maybe It Should Try Not Breaking Things Instead

Top Tips for a Serial Entrepreneur in a New Industry

This Dividend-Powered Plan Lets You Retire In 7 Years

What You Need to Know About Log4j: the Nasty Software Bug Posing a Major Threat to Small Businesses

Why So Many Top Tech Companies Have Indian-Born CEOs, According to a Startup Veteran

Loss of ancient grazers triggered a global rise in fires

Coronavirus Symptoms: These two symptoms are being linked to Omicron subvariant ‘Stealth’