Meet Cathie Wood, the US fund manager fast becoming as famous as Warren Buffett, but already twice as controversial.

Acolytes are drawn to her stock picking doctrines, which are based on the gains and social good that will flow from the disruptive power of technological innovation. She likens this revolution to the introduction of electricity to manufacturing in the late 19th century.

Some among the Wood faithful even sport T-shirts bearing her portrait in the style of the Barack Obama Hope poster, although the 65-year-old investment star is a Republican who supported Donald Trump.

This ‘mom, economist and women’s advocate’, as her Twitter biography puts it, contends that the Biden administration’s spending and taxation policies will stifle innovation and its capacity to bring change.

Although set up only in 2014, Ark has attracted $85billion in savings to its range of ETFs, including the flagship Ark Innovation, which owns stakes in an array of tech names like Roku, which makes digital media players for streaming, Twilio, the cloud computing giant, and Tesla, probably Wood’s favourite share.

These funds allow daily dealing, and the holdings are also disclosed every day. Wood is not only the CEO, she is chief investment officer – and (albeit unofficially) chief publicist.

Her politics make the news rather less than her enthusiasm for Tesla, which she forecasts will climb to $3,000 in 2025, against $711 today, and bitcoin.

She believes the crypto-currency will reach $500,000. At present the price is $48,000. She dismisses environmental concerns and claims that it will aid economic empowerment in developing nations.

But Wood is pessimistic about the outlook for legacy industries such as traditional car manufacturing, financial services and retail.

They are in ‘harm’s way’ and ill-equipped to cope in the age of artificial intelligence and robotics.

The latter are two of the five pillars of disruptive innovation on which Ark is built. The others are blockchain, DNA sequencing and energy storage.

Such is the attention paid to Wood’s share buying that it can move markets. Last week JD.com, the Chinese ecommerce group, reported better-than-expected second quarter profits.

But the jump in its share price seems to have been linked more to Ark’s decision to acquire the stock.

Critics, who deplore Wood’s devotion to unprofitable tech companies, liken her influence to a cult.

But managing money in America can be a branch of showbusiness and Wood ensures that she is centre stage on Youtube and CNBC, with her polished look of large glasses, pearl stud earrings and black shoulder-length hair. 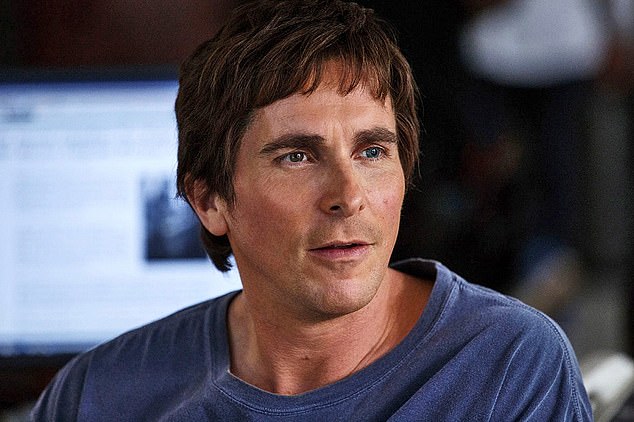 Michael Burry, who was played by Christian Bale (pictured) in the film The Big Short, has joined  investors shorting Ark funds

She appears proud to confound the assumption that women of her generation must be distrustful of technology. In her pronouncements, she is forthright to a degree that is astonishing to UK investors who can remain largely unaware of which firms their money backs.

Bent on transparency, Wood shares her opinions on the economy, crypto-currencies and stocks through daily emails to customers, Ark’s podcasts and Twitter, where she has a million followers. At present she believes that ‘inflation will surprise on the low side’, for example.

Another reason why innovation is an unalloyed good thing, according to Wood, is that it is deflationary.

The UK may have star fund managers like Terry Smith and Nick Train. But neither of the two has his face on a T-shirt (that we know of), or talks openly about religion – unlike Wood.

The child of Irish parents who emigrated to Los Angeles, she reads the Bible daily and says she was inspired by the Holy Spirit to set up her business on a summer’s day when she found herself alone in her house, her three children having departed for camp.

The name Ark may stand for active research knowledge (Wood does copious research), but it is also a biblical reference to the Ark of the Covenant.

Silicon Valley executives tend not to talk much about the Almighty, which makes you wonder what they think of Wood’s declaration that she is ‘allocating capital to God’s creation in the most innovative and creative way possible.’

Lately, Wood is having to rely more than usual on her eloquence to defend her strategy, which she developed during a 12-year stint as chief investment officer at Alliance Bernstein that began in 2001.

The economics and finance graduate of the University of California first worked as an economist, switching to portfolio management.

During 2020, Ark Innovation rose by 149 per cent, thanks to its portfolio of lockdown stocks such as Teladoc, the payments system Square, and Zoom.

This year, the performance has been lacklustre. The fund fell between February and May and is 0.14 per cent down since January. Over the same period, the Nasdaq is up 21 per cent and the S&P 500 is 23 per cent higher.

As a result, $944million flowed out in July and Wood’s detractors are circling. Matthew Tuttle, of Tuttle Capital, another fund manager, is proposing a fund that ‘shorts’ the Ark ETF, using options to bet against its holdings.

Last month, there were about $2.7billion worth of bets against the fund, the short sellers having been joined by Michael Burry of Scion Asset Management, a celebrity thanks to his role in The Big Short, the Michael Lewis book on the housing bubble of the early 2000s which was made into a film.

Wood has said Burry fails to understand ‘fundamentals that are creating explosive growth and investment opportunities in the innovation space’.

The appeal of the Ark ETFs has sent major fund managers scurrying to offer ETFs of the Ark-type.

Also, even in the 21st century, it is unusual for a woman to head such a business and make key calls on stock choices. In the UK, Anne Richards is CEO of Fidelity International, but there is no-one else approaching Wood’s status.

In months ahead she will be battling to show that hers is the right approach. She has called on savers ‘to keep the faith’.

If this fight between Wood and Burry turns really ugly, it could even be a film. Christian Bale played Burry in The Big Short. Maybe Demi Moore could play Wood?

The Spotify Unwrapped Playlist is All the Rage. But What if They’re Missing a Key Part of the Human Consumer Experience?

The only way is up: How energy hikes and other costs could squeeze your wallet

An effective new drug to treat covid-19 emerges from Merck

Lessons On Startup Leadership From An Unexpected Continent

You Should Rethink What You Think You Know About Hiring Millennials