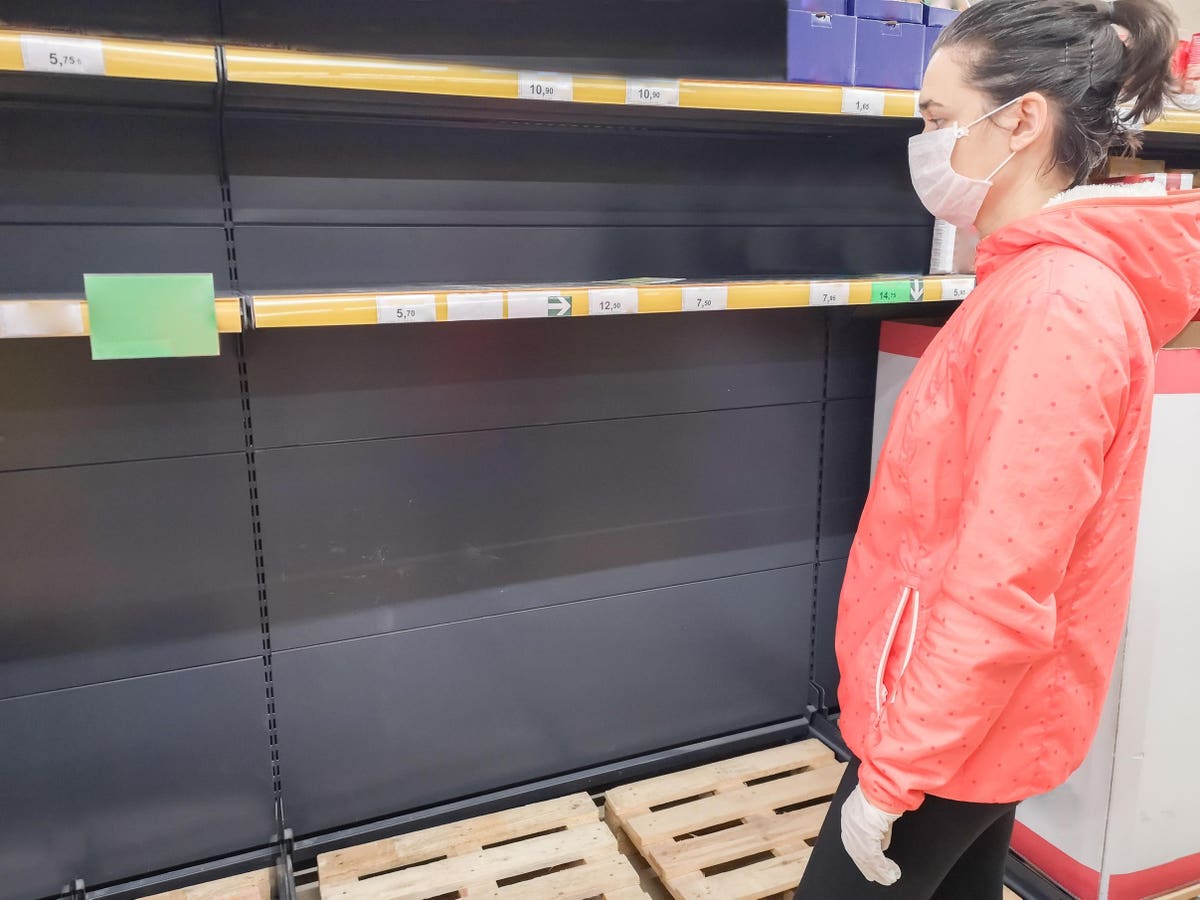 Today, many strange and not-so-strange shortages are popping up left and right, whether it be well-documented shortages (e.g., rental cars, bicycles, and semiconductor chips) or more mysterious shortages (e.g., Halloween candy, French fries, and Thanksgiving turkeys). And this problem is not just a domestic one. In the face of anemic economic growth, natural gas prices in Europe have quadrupled, coal prices in China stand at an eight-year high, and gasoline shortages in the United Kingdom are accelerating. At the beginning of the coronavirus pandemic, it made intuitive sense for the world to run short of surgical masks, computer webcams, and hand sanitizer. 18 months later, despite the re-opening of the economy, consumers are experiencing surprisingly long lines, higher prices, limited choices, and constant references to amorphous “supply chain issues.” In too many cases, there is no stock available, and no idea when the product will be delivered.

It would be overly simplistic to just to blame the coronavirus, which has certainly contributed to the current series of global supply chain problems. In reality, the pandemic has often just exacerbated already existing issues. The conditions in place prior to the pandemic helped greatly to create today’s shortages. Many of today’s supply chain issues can be associated with labor shortages, whether it be the labor necessary to make a product in a factory, receive a shipment of containers at a port, or transport shipments in a truck. Other significant and interlinked issues contributing to today’s shortages include transportation problems, deficient energy investment, excessive industry consolidation, and semiconductor issues.

With the Delta variant causing a persistent risk of coronavirus infections, companies are struggling to hire workers. Federal jobless benefits and continued childcare obligations may be acting as obstacles in preventing many workers from re-entering the labor force. Additionally, some workers have decided to switch careers during the pandemic or retire early after a layoff. Others are quitting jobs that require them to work full-time in physical offices. Roughly 10,000 Baby Boomers have been retiring each day, and that trend certainly has not slowed during the pandemic. The combination of all these factors and recent deglobalization trends suggest that the days of plentiful and inexpensive labor may be in the past.

A series of events have disrupted the world’s well-oiled supply chain systems, causing transportation bottlenecks on land and sea. In March 2021, the week-long blockage in the Suez Canal halted shipping traffic on a vital transportation waterway that links Europe to Asia. Roughly l2% of global trade, ~1 million barrels of oil and approximately 8% of the world’s liquified natural gas pass through the Suez Canal each day – all of which ground to a rapid halt. A series of temporary coronavirus-related closures of key ports in China and Vietnam have strained product exports over the past 18 months. As of this writing, more than 70 container ships are idling offshore the ports of Los Angeles and Long Beach because there are not enough dockworkers to unload the cargo, nor are there enough truck drivers to transport the goods. As demonstrated in the chart to the right, these transportation disruptions have caused container shipping costs to more than quadruple as compared to last year.  The pandemic has highlighted that optimized supply chains, while highly efficient in most conditions, can prove to be inherently fragile in times of extreme dislocation.

With relatively low oil and gas prices over the past six years, traditional exploration and production companies have materially curtailed capital investment. However, today’s energy shortages cannot be blamed merely on the lack of investment. Last year, a cold winter in Europe caused energy storage facilities to be drawn down to lower than normal levels. Prices for other commodities like coal have been rising, making it cost-prohibitive for power producers to switch input fuels. Increased weather volatility has further contributed to the problem; one reason why oil and gas supplies are low is the damage that Hurricane Ida did to the energy infrastructure in the Gulf of Mexico.

The labor shortages bedeviling the world are affecting the energy markets. In the United Kingdom, the number of available truckers as compared to the total need for truckers stands at a ratio of 1:8, largely attributed to a scarcity of labor caused by Brexit; most truckers were forced to leave the United Kingdom after Brexit because they were not U.K. citizens. As a result, the United Kingdom is experiencing shocking gasoline shortages and ridiculously long lines. Until the United Kingdom increases wages sufficient to attract domestic workers to trucking jobs, these shortages should remain in place.

Energy shortages exacerbate other problems, which, in turn, create additional, cascading supply chain constraints. These shortages prevent products from being transported, stop workers from getting to their jobs, cause unplanned production shutdowns, and generally make it difficult for companies to resolve their supply chain shortages.

As a result of decades of lax antitrust enforcement, corporate concentration has increased in virtually every industry, including airlines, wireless telecom services, cable television, hospitals, medical insurance, social media, semiconductors, and others. In our view, the level of corporate concentration in specific industries has contributed to today’s shortages.

For example, in the bicycle components industry, Japan-based Shimano boasts ~70% of global market share for components for bicycles that cost more than $500. With the massive spike in demand for bicycles over the past 18 months, both Shimano and SRAM, Shimano’s primary competitor, have shown that they simply do not have sufficient production capacity to supply their customers. As a result, bicycle and bicycle component shortages are commonplace. Should there have been a more fragmented industry, the extent to which shortages have occurred would have been far more limited.

Beyond shipping, energy, and labor, the world is faced with a serious semiconductor chip shortage, driven by four key factors. First, the pandemic exacerbated supply chain issues by disrupting semiconductor production just as the global demand for electronic products surged. Second, semiconductor producers projected too little demand during the pandemic. Companies that cut back on semiconductor orders during the pandemic were subsequently forced to go to the end of the production line. Third, semiconductor chips are used in a wide array of products, including computing devices, cell phones, tablets, home appliances, cars, and gaming consoles. All of these product categories experienced a spike in demand. Furthermore, demand materially increased for certain new technologies, such as artificial intelligence, electric vehicles, cloud computing, and 5G cellular networks — all areas that require an increasing number of chips. Semiconductor demand in 2021 has jumped by nearly 50%. Fourth, over the past few years, there has been a secular trend of outsourcing production to chip foundry companies like Taiwan Semiconductor
. These foundry companies were already working at full capacity prior to the pandemic, and funding and building a new semiconductor fab is a five-year process. Adding new semiconductor production capacity requires massive investment, deep technological know-how, and enormous amounts of time. Like the bicycle components industry, the availability of semiconductor chips has been affected by extreme industry concentration within the semiconductor industry.

Accordingly, current lead times for many semiconductor parts are roughly one year out, which should cause widespread shortages of many electronic products (e.g., cars, washing machines, dishwashers, televisions) that could persist for at least a year, if not longer.

Implications for the Stock Market

Should these shortages dissipate sooner rather than later, inventory levels, employment levels, and out-of-stock rates will revert to historical averages. However, countries have started to erect walled gardens around their economies, and, as a result, shortages and inflationary forces may become far more common. If we are entering a more permanent environment where shortages become commonplace, the long-term impact on the markets, the dollar, and the broader economy will be consequential.

Companies like Amazon, Target
, and FedEx
have either warned about the impact of rising labor costs on profitability and/or have started to offer material compensation adjustments to address growing labor shortages. Not only will corporations have to pay more in labor expenses, but they also will be forced to pay more to produce goods and transport them. Companies with strong brands that sell products with inelastic demand should be able to pass on the added costs to their customers without too much pushback. Large companies are less likely to have supply chain disruptions than smaller companies, as their suppliers are likely to focus on maintaining solid relationships with their most important customers.*

To reduce the risk of supply chain problems going forward, we expect companies to tighten their supply chains, bring more production closer to home, and increase safety inventory levels. These changes will increase costs and require additional funds to be held in working capital, thus reducing returns on capital going forward. None of this is good for rising share prices.

Such corporate adjustments would represent significant shifts from the ongoing trends of the last several decades, when global supply chains, just-in-time inventory systems, and a general lack of shortages dominated the economic landscape. Such changes would cause additional inflation, causing companies that market discretionary products to be disproportionally hurt. In contrast, companies that sell necessities should increase their share of consumers’ wallets as consumers adjust their budgets accordingly.

With rising prices and increasing shortages, stock picking is likely to become far more important in the coming years.

Disclosure: This article is for informational purposes only and is not a recommendation of a particular strategy. The views are those of Adam Strauss as of the date of publication and are subject to change and to the disclaimer of Pekin Hardy Strauss Wealth Management. Follow me on LinkedIn. Check out my firm’s website or follow us on Twitter.

Imperfect borrowers left behind as mortgage wars hot up

Paytm To Accept Bitcoin Transactions if it is Legalized in India, Says CFO

What if firms were forced to pay for frying the planet

Small Businesses’ Search For Cash Begins And Ends With Fintech

Post Office customers can now use app to prove identity

Dear Fiona: How do we support our son and daughter-in-law after our grandchild’s cot death?

Ministers under pressure to block private equity takeover of Ultra

Serie A: Joy and Tears for Dybala as Juventus Beat Sampdoria in First Home Win

Is China already the world’s most dominant economy?