Not Your Keys, Not Your Coins? Whatever. 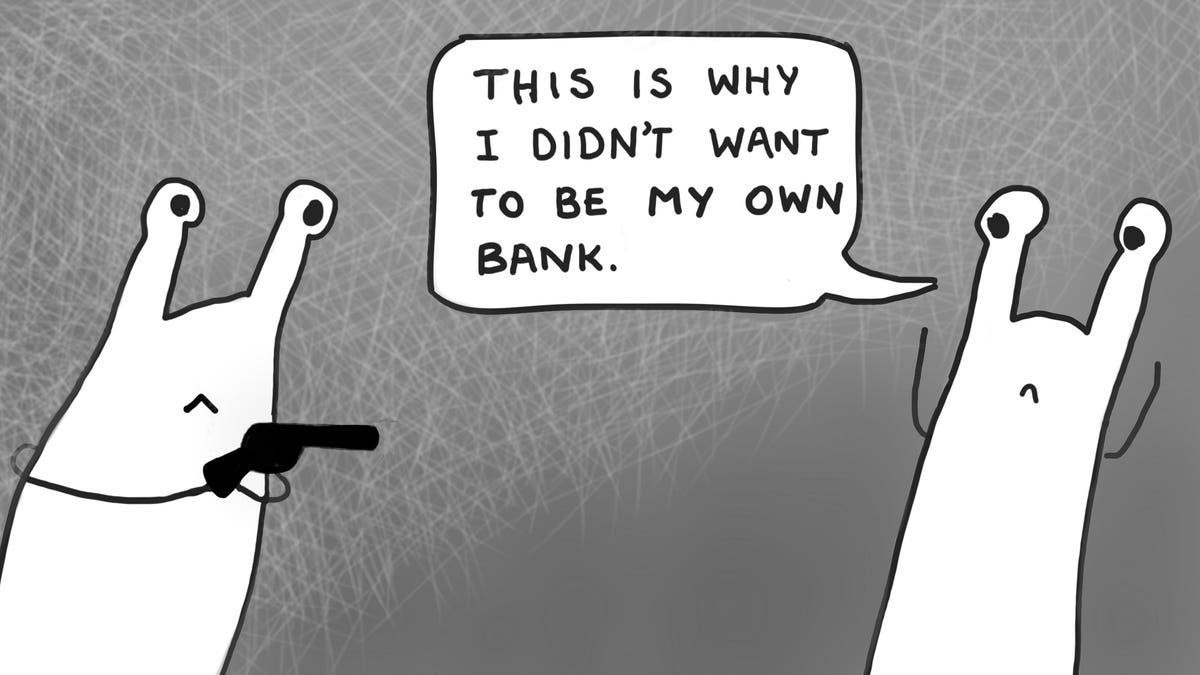 No Normal Person Wants To Be Their Own Bank

A couple of years ago, a pair of metal detectorists in England came across a hoard of 2,571 Anglo-Saxon and Norman coins. The coins would have belonged to a wealthy person who probably buried them for safekeeping shortly after William the Bastard’s illegal invasion of England in 1066. This, I suppose, was the medieval equivalent of being your own bank. Unfortunately, however, if your head gets cut off during a genocidal campaign of regime change or the dog eats your USB stick, then the cash will vanish from circulation, out of the reach of your heirs until recovered by amateur archeologists or quantum computers.

Why would anyone want to be their own bank?

I have some cryptocurrency which is stored safely on a USB interface hard wallet protected by a long pass phrase. Naturally, with security in mind, I have it rolled up in tinfoil and buried it under a tree in my back garden. The pass phrase and a description of the tree are transcribed onto a lead plate that is buried in my sister’s garden and the directions to recover it are in a sealed envelope held by my solicitor with strict instructions not to open it except in the event of my death.

When I want to spend some of my hard-speculated crypto-cash it takes me more than half an hour to dig up the USB stick, connect it to my off-grid laptop, transfer some electronic cash to the hard drive, re-bury the USB stick (I also bury a decoy stick under another tree in case someone is watching) and then go online to move the electronic cash online and ready to spend.

Now I have to say this is not quite as convenient as my mobile banking app, my Wise card or my Royal London pension fund web site. But there you go, it’s the price of progress, I suppose.

Be Your Own Bank?

Not your keys, not your coins is a fun rallying cry for computer science undergraduates and paranoid warlords, but it makes absolutely no sense that the average person should be loaded with this responsibility. Adam Levine says that while the idea of self-sovereignty in crypto is empowering it demands a “persistent competence” that I think is well beyond the capability and capacity of the average member of the public, and I include myself in that category.

I got caught up in a debate about this recently and I asked the cryptocurrency maven of the maximally decentralised position where he expected the average person to store these keys. After all, current estimates are that more than a fifth of Bitcoins are already lost . Since Bitcoin owners need access to their keys (or some kind of recovery phrase) to access their cryptowealth, if they forget these then they are screwed. And there are also crypocurrency owners who just drop dead and take their passwords with them. Hence the amount of buried treasure will only grow as more people forget their passwords, die, accidentally throw away their old hard disk full of Bitcoins or (as I did) upgrade their phone without backing up their data properly. As Jonathan Levin of Chainalysis, who I regard as the “go to guy” for tracing missing Bitcoins, memorably told NPR: “For the people that have lost their bitcoins, I say tough luck“.

My cryptofan friend suggested I keep a backup in a safety deposit box in a bank. This of course made me wonder: Why not just keep the keys in the bank in the first place? I am sure that this is what most people want to do. I am far too irresponsible, forgetful and lazy to want to assume the responsibility for being my own bank! And even if I was prepared to give it a go, I am not a data security stronghold with layers of defences against hackers, cyber attackers or disgruntled bag holders. But my bank is, which is why I would be happy to pay them a reasonable fee for managing both the keys and the interface between the Wild West of crypto and the banking system itself.

Jamie Dimon, the billionaire CEO of JP Morgan Chase
, recently said (in addition to saying that “I personally think that Bitcoin is worthless”) that if their customers want to buy cryptocurrency then the bank will give “legitimate” access but that the bank would not custody their holdings. But why not?

Be Their Own Bank!

I am very interested to see banks beginning to offer cryptocurrency custody services (eg, US Bank, which has just launched a safekeeping custody service for institutional investment managers). Take a look at State Street, which provides custody services to institutional investors. They have already launched a digital finance division to expand into areas including cryptocurrency and tokenisation, led by Nadine Chakar (the bank’s head of global markets). She said earlier this year that State Street can “leverage our expertise in securities finance and lending to explore how investors can borrow and lend cryptoassets” and went on to say that she believes that all financial instruments could become digitalised in future (and for what it’s worth, I agree with her wholeheartedly). BNY Mellon is also building a digital custody platform and other serious players are also looking at the space and it presents a huge opportunity for banks. As Nadine went on to say about the use of digital assets, regulated banks can offer new services and this will create “new business models and new business opportunities”.

So why not extend these services to individual consumers? It could be a huge business. Not especially because of people tucking away their Bitcoins but because of the trading of cryptoassets of all kinds. I can’t store my gold bars in my local bank branch, but I can store by gold-backed stablecoins in my bank’s cryptocustody service. Deloitte say that such custody services are “crucial” to the widespread adoption of digital assets and they are absolutely correct. PayPal
spent a couple of hundred million on the custody service Curv earlier in the year, so we can all see the direction of travel, but there is no reason why banks cannot compete effectively in this space.

While many organisations could (and do) provide custody services, I am particularly interested in the role of commercial banks. In my view, the “incentive” function of banks is often overlooked, but it is strategically important: That is, the existence of regulated financial institutions in a market means that transactions will take place that would otherwise not take place. Cryptoassets are a perfect example of this. In 2020 almost all Americans with cryptocurrencies said that they would or might use their bank to buy and sell them. In addition, however, I strongly suspect that there are a substantial fraction of all Americans who do not currently hold, or even want, cryptocurrencies such as Bitcoin but who would hold cryptoassets such as NFTs, stablecoins and such like if the custody service was offered by their bank.

Be my own bank? No way. It makes much more sense to keep my assets in the safekeeping of an institution that specialises in keeping assets safe. An institution that is regulated, insured and managed to ensure that whatever happens, I as a normal customer (who does not spend every waking hour working on data security) am protected.

Why the market for secondhand private-equity stakes is thriving

Bargain Stocks From The Father Of Value Investing

Does Dow One Million Make Sense?

Aadhaar Card Update: Steps to Follow to Protect yourself from Financial Frauds

Positioning your Portfolio for a Debt Ceiling Debacle