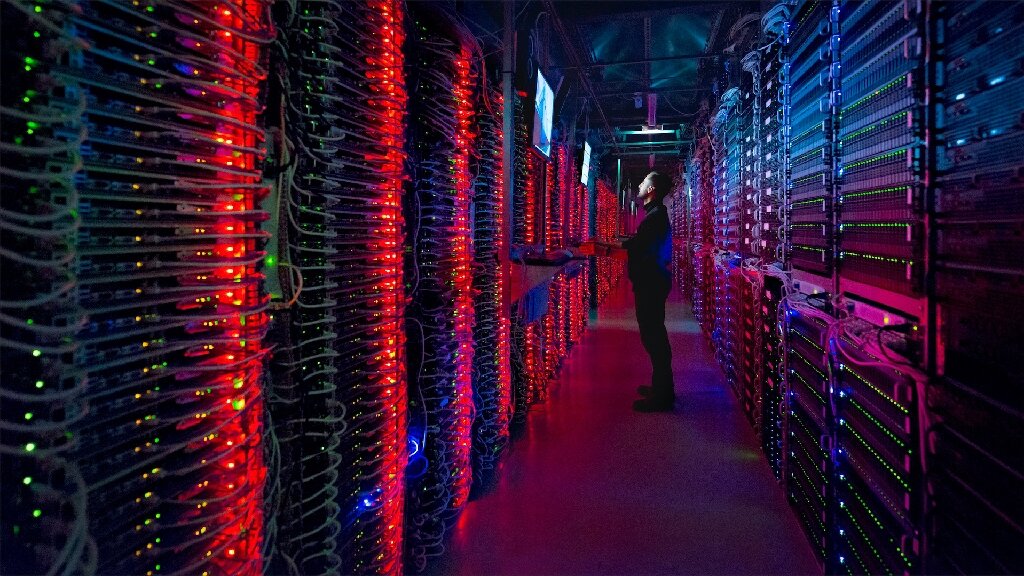 With vast amounts of cheap and renewable electricity mostly generated from hydro dams, Quebec is seeing more and more tech giants setting up power-hungry data centres in the Canadian province.

Demand for cloud services has sent the number of data centres soaring worldwide, and in Quebec alone fifty now operate where just 39 existed two years ago.

Many are owned by multinationals such as Amazon Web Services, Microsoft, Google and IBM.

But the Canadian province is hoping to woo more companies in this space.

Google is increasing its footprint in Quebec with the purchase of about 60 hectares (150 acres) on which it will build its first local data centre for Can$735 million (US$600 million). Microsoft, also looking to expand, has purchased land in Quebec City.

French cloud computing pioneer OVHcloud, meanwhile, set up one of its 32 data centres in Quebec in 2012.

Inside a former aluminium factory in a Montreal suburb, tens of thousands of servers are stacked row upon row, connected by a tangle of wires. A deafening hum along with non-stop blinking red and green lights create a sensory deluge.

“The objective was to establish ourselves on the American continent and Quebec was a natural gateway, while offering an endless source of renewable energy. This is perhaps not the only reason, but it played a big part in our decision,” Estelle Azemard, OVHcloud vice-president for the Americas, told AFP.

Its 10,000 square metre (105,000 square foot) facility is located in Beauharnois, a few dozen kilometres from Montreal’s downtown, near a hydroelectric dam.

The company has developed a technology to cool its servers using water, allowing it to dispense with costlier air conditioning.

“The environment is really at the heart of our business model,” Azemard said.

Making a significant financial argument for relocating, Quebec boasts low-cost electricity of about Can$0.05 per kilowatt hour, significantly cheaper than in Europe or the United States.

“Our rates are among the most advantageous in the world,” said Cendrix Bouchard, spokesman for public utility Hydro-Quebec, which manages generation, transmission and distribution of electricity in the province.

“Companies came here because it’s cheap, but above all because the energy (99 percent of it) is renewable,” Paquet said to AFP.

The long, cold winters in the French-speaking province also reduce the amount of energy needed in data centres to cool computers, he said.

This sector, which is facing an explosion of data traffic, emits nearly four percent of the world’s greenhouse gases, which is more than civil air transport, according to a 2019 report by the French think tank The Shift Project.

In Quebec, the monthly electricity consumption of data centres is approximately 663 gigawatt hours (GWh), or the equivalent of the consumption of 40,000 households.

“It is better to put data centres in places which are supplied with hydro, solar or even nuclear electricity, than supplied by electricity produced by coal-fired power stations,” said Hugues Ferreboeuf of The Shift Project.

“But that’s not enough,” he warned. “At the same time, they must manage to control the growth in their consumption, otherwise they will capture too much of the electricity produced by renewable energies.”

This Week’s Top Trending Stocks Include Netflix And AT&T

Get authentic Indian artisan products at the Amazon Karigar Mela

Delix Therapeutics Pursues A Psychedelic-Inspired Medicine Without The Trip