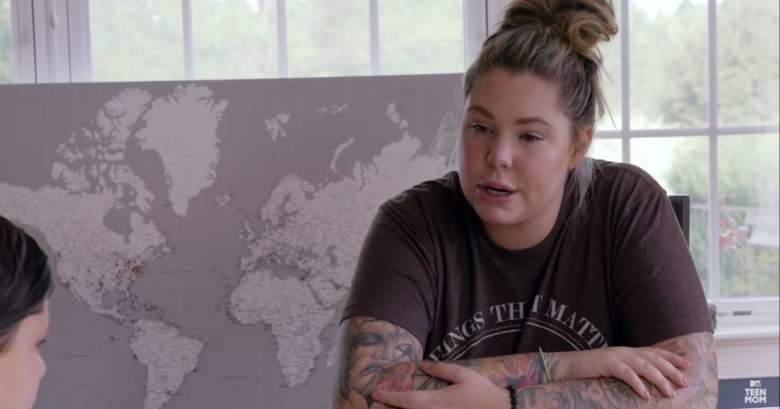 “Teen Mom 2” star Kailyn Lowry hinted that she was engaged.

Congrats? “Teen Mom 2” star Kailyn Lowry seemed to hint that she was engaged, sparking rumors to swirl among fans.

“Why are people saying you’re engaged to baby daddy No. 3?” a fan inquire via Instagram on September 16, per In Touch Weekly.

Lowry, 29, didn’t have any answers. The third person Lowry had children with was Chris Lopez, the father of her sons Lux, 4, and Creed, 1. They have famously had a tumultuous relationship, with Lowry recently slamming him for referring to her with the wrong pronouns and accusing Lopez of “fat-shaming” her.

“Well, that’s a new rumor to me. I would never, ever accept a ring from him,” she said, adding a laughing emoji to seemingly show her feelings on the matter.

Another question people wanted to be answered while Lowry was opening up: Will she and her ex-husband, Javi Marroquin, ever get back together? The couple shares a 7-year-old son, Lincoln.

Lowry was succinct in her response. “No! We are finally in a good place and co-parenting and working together,” she said, according to The Sun.

In fact, fans wondering about the status of Lowry and Marroquin’s relationship is was one the most irritating questions Lowry encounters.

“What’s one question you wish people would stop asking?” a viewer asked.

If I’m going to get back with Javi,” the mother-of-four replied. “The answer is no.”

While speaking about non-binary singer Demi Lovato on her “Coffee Convos” podcast, the mother-of-four realized she used the wrong pronouns when speaking about Lovato. In March 2021, the “Heartattack” singer revealed they are non-binary and feel more comfortable with they/them pronouns.

“I feel that this best represents the fluidity I feel in my gender expression and allows me to feel most authentic and true to the person I both know I am, and am still discovering,” they said at the time, per People.

Lowry, 29, issued a public apology to the artist.

“I think it was yesterday or the day before I got on here to correct Chris on my pronouns. My pronouns are ‘she’ and ‘her.’ He constantly calls me ‘they,’” Lowry said, as noted by Page Six. “Knowing that that’s done to me, I actually caught myself referring to Demi Lovato in today’s episode as ‘her’ and ‘she’ when her [sic] pronoun is ‘they.’”

Lopez signed a contract to be a part of “Teen Mom 2,” and Lowry was not pleased with MTV. While the mother-of-four claimed she didn’t care what Lopez was up to, she alleged the network should have ran the decision by her first — or at least informed her about what was happening.

“I don’t give one single f*** what Chris does,” she wrote, per screengrabs posted to Reddit. “I care about how it was handled/how I found out and the lack of respect people have for me after 12 years of doing this show.”

An insider claimed Lowry felt Lopez was profiting off one of her opportunities.

“When Kail found out Chris is now receiving money for appearing on the show, she was very upset and texted [one of the higher-up producers] and said it was disrespectful of them to have given Chris a contract and not even have given her the heads-up, especially after all these years,” a source told The Ashley’s Reality Roundup. “Kail was not happy that Chris is going to be cashing in on an opportunity created by her.”

Bimini Bon Boulash: ‘All drag queens have a level of delusion about them’

America’s Got Talent contestant almost dies in accident on stage

Leah Remini Rumored to Be in Talks to Join ‘RHOBH’

A bold, controversial memorial to a wartime massacre in Kyiv

I definitely think that in Aryan’s case, this is harassment: Tanishaa – Times of India

Nifty 50 Hits Record 18,000 for First Time Ever, What Investors Should Do Now