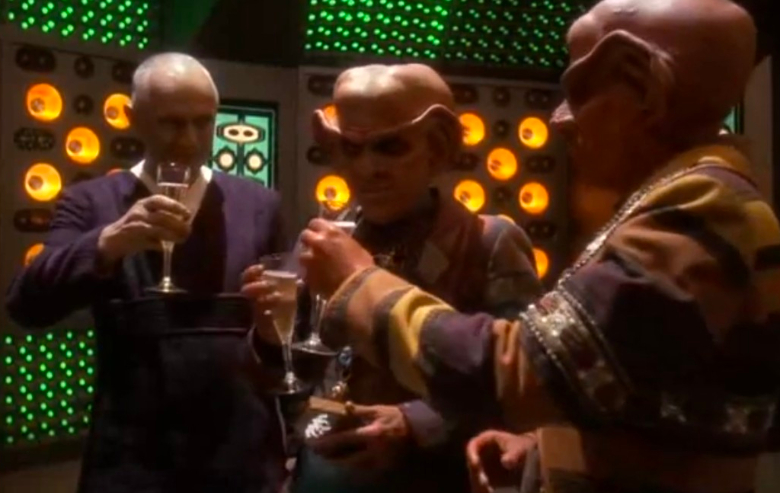 Replicators are one of the most important technologies in the “Star Trek” universe. As Manu Saadia points out in his book “Trekonomics: The Economics of Star Trek,” replicators enable a “post-scarcity” society.

When necessary goods like food, clothing, shelter, and tools can all be created with a complex computer system, there is no more scarcity of resources. Since resources are abundant in the Trekverse, there’s no need to fight over them. When nearly anything can be replicated, no one needs to buy goods. So, an economic system based on profit and greed, like capitalism, becomes an antiquated system.

How can capitalism thrive in a post-scarcity world? Why would profit-based commerce still exist when nearly everything people need can be made instantly with a computer? The “Star Trek” canon provides some interesting answers.

Some Things Still Can’t Be Replicated

One major reason that profit-based commerce still exists in the Trekverse is that there are a few necessary goods that cannot be replicated. The prime example is dilithium crystals, which are the main energy source for Trek’s starships. The existence of multiple dilithium mining operations throughout the Alpha and Beta Quadrants is proof that this crucial element cannot be replicated, or at least not in the quantities necessary to power starships.

Many other natural resources used as energy sources or for starship construction either couldn’t be replicated or couldn’t be replicated in the quantities necessary for the smooth functioning of a post-warp society. So, they were also mined. According to Memory Alpha, the mining of natural resources is still a major commercial activity in the 23rd and 24th centuries.

The crucial natural resources that cannot be replicated need to be either traded for or sold, which allows capitalism to thrive even in a post-scarcity world.

Starfleet replicators also had specific safety measures that prevented them from making harmful items. The “Star Trek: Voyager” episode “Deathwish” established that weapons and deadly poisons could not be replicated. This created a booming black market for weapons. The “Star Trek: Deep Space Nine” episode “Business as Usual” established that the Ferengi were often involved in weapons dealing.

Replicators Need to be Programmed

Like any computer application, replicators needed to be programmed to produce specific items. Replicators on Starfleet ships came pre-programmed with millions of items from throughout the universe. However, unfamiliar items often weren’t in the original programming.

Items common to alien species, especially foods and drinks, often weren’t in the replicators. So, people added their own programs to the replicators to produce these items. For example, Worf programmed bloodwine into the Enterprise-D’s computer. People could also modify existing programs to customize them, like Miles and Keiko O’Brien did to mimic their favorite childhood foods.

Throughout the “Star Trek” franchise, humans and aliens alike have insisted that replicated items just aren’t as good as the genuine article. Usually, this point is made about food.

When this point is made about items other than food, it’s usually made about collectible items. The “Star Trek: The Next Generation” episode “The Most Toys” established that there are beings throughout the universe that pride themselves on accumulating genuine artifacts rather than replicated ones. “Star Trek: Lower Decks” furthered this canon with the episode “Kayshon, His Eyes Open.” Quark also held auctions on “Deep Space Nine” where he touted his stock of authentic, non-replicated items.

So, even in a post-scarcity world, where nearly anything a person wants can be replicated, there is still demand for non-replicated products. More than anything else, this is what allows the Ferengis’ economic system to thrive. Though some Ferengis deal in weapons and natural resources that can’t be replicated, most Ferengis deal in the items that everyday beings desire. It seems that even in a utopian future, desire is still a constant.

In a recent episode of “Lower Decks,” Ensign Beckett Mariner derisively asked the Ferengis that held her captive why they continued to ravage natural resources instead of just replicating the things they wanted to sell. Though the Ferengis themselves didn’t answer, the answer was apparent in their dealings. They were selling Mugato pelts, which could easily be replicated without killing the Mugatos.

This, and all of the Ferengis business dealings throughout the “Star Trek” franchise, suggests that profit-driven commerce will always exist on some level. Even when things can be easily replicated, even when destroying natural resources to create a product is no longer necessary, some beings will still want the genuine article instead of a copy of a copy.

Kim Kardashian and Kanye West are ‘working on their relationship’

South divas and their viral clicks of this week

Ruth Langsford recalls the ‘difficult’ conversation she had with son Jack, 19, about sexual consent

Did Dale Moss Cheat on Clare Crawley With Abigail Heringer?

Britney Spears’ lawyer is launching a probe into her father Jamie