Which Pro Will ‘Bachelor’ Matt James Be Paired With on ‘Dancing With the Stars’? 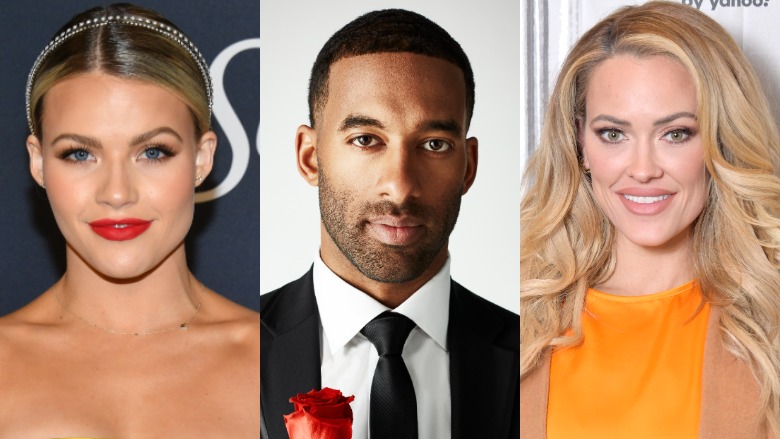 Matt James has been announced as part of the cast of the new season of “Dancing With the Stars,” but the person who he will be dancing with has yet to be revealed.

The former “Bachelor” star is set to trade in roses for dancing shoes, and there are eight pros that he could be taking lessons from. According to E! News, Britt Stewart, Cheryl Burke, Emma Slater, Jenna Johnson, Lindsay Arnold, Sharna Burgess, Witney Carson, and Daniella Karagach have all signed on for Season 30.

While your guess who James will be paired up with might be as good as the next person’s, there could be a way to figure it out. According to Good Morning America, the coupled up pairs will not be revealed ahead of the September 20, 2021, premiere.

The full cast of stars will be revealed on “Good Morning America” on September 8, 2021. Fans will undoubtedly keeping tabs on everyone’s Instagram accounts to try to figure out who is dancing with who. Given how bad James is at keeping a secret (cough, cough Spotify), we’re sure that someone will be able to pick up on some clues for his account. Maybe it’s best that he just stay off social media for a bit!

James Is Among the Tallest Contestants on the new Season

Believe it or not, James might be the tallest contestant to compete on Season 30 of “Dancing With the Stars.” The former athlete stands at 6-feet-5-inches tall, which is approximately the same height as rumored cast member Iman Shumpert.

TMZ confirmed that Shumpert, a professional basketball player, will also be competing on “DWTS,” going head-to-head with James and several other stars, including JoJo Siwa, Kenya Moore, and Suni Lee.

It’s possible that these super tall guys will be paired with taller pros so that the height difference isn’t a huge disadvantage out of the gate. Someone like Cheryl Burke, for example, is only 5-feet-4-inches tall, and may not be the best choice to teach James how to tango. Witney Carson is even shorter, standing at 5-feet-3-inches tall. Jenna Johnson is even more petite at 5-feet-2-inches tall.

Out of these three women, it would be a toss up. However, Murgatroyd seems like the obvious choice, simply because she was previously partnered with two former “Bachelor” stars; Sean Lowe and Nick Viall.

According to Us Weekly, Carson previously took the dance floor with Chris Soules and Johnson gave it her best shot with Joe Amabile. Jake Pavelka danced with Chelsie Hightower, who is no longer a part of the show.

James Is Unlikely to Be Paired With Sharna Burgess

James probably won’t get to boogie with pro Sharna Burgess because she will more than likely be paired up with her beau, actor Brian Austin Green.

There had been a few rumors circulating that Green would be joining the new season — and taking ballroom dancing lessons from his girlfriend — and TMZ has confirmed one of those things; Green is going to be competing on Season 30. It seems obvious, however, that Burgess will be his partner.

The couple has been mum on the unofficial announcement, which is likely due to their respective contracts with the network.

No matter who James ends up paired with, he’s certainly going to need your votes to keep him around if he wants a shot at that Mirror Ball trophy!

READ NEXT: Witney Carson Slammed for Not Putting Her Baby in a Life Vest