Where Was ‘Raise a Glass to Love’ Filmed? See Cast Stories & Locations 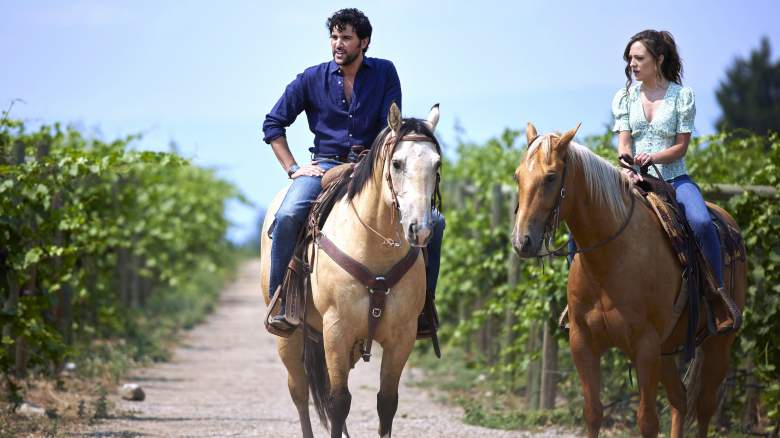 Raise a Glass to Love

Hallmark’s newest original movie, “Raise a Glass to Love,” premieres Saturday, September 18 at 9 p.m. Eastern/8 p.m. Central. The movie stars Laura Osnes, Juan Pablo Di Pace, and Jennifer Huether portraying herself. This is part of Hallmark’s Fall Harvest lineup. Astute viewers may realize that although the movie takes place in Sonoma, that’s not where it was actually filmed. Read on to see where it was filmed, along with stories from the cast.

‘Raise a Glass to Love’ Was Filmed in Canada, Where British Columbia Doubles for Sonoma

Although the movie takes place in Sonoma, it’s actually filmed in British Columbia, which doubles for the California location.

Co-writer Laura Rohrman told Press Democrat about the filming location: “The movie is set in Sonoma, but it was filmed in British Columbia. It’s not as beautiful as Sonoma County, but it looks pretty good.”

In a reply to Huether’s post about the movie, one person wrote: “I guess it was filmed in Okanagan Valley.” Huether replied: “haha you guessed right.”

Okanagan Valley is known for wineries and orchards and it’s one of the warmest regions in Canada. Huether shared that she visited some of Okanagan’s wineries while filming.

Kelowna, British Columbia, was one of the filming locations, Osnes shared in an Instagram post. She shared a series of on location photos from filming.

Osnes said the cast and crew was stellar. On July 25, she posted that they wrapped filming and shared more behind-the-scenes photos. She wrote: “What an unforgettable three weeks filming in the picturesque vineyards of Kelowna, British Columbia… particularly because I got to play alongside the captivatingly charming and brilliantly generous @juanpablodipace. … Yup, JP stole all of our hearts the moment he walked on set! So so grateful for this gorgeous experience – we can’t wait to share more soon!

Lini Evans, who stars in the movie, shared this photo she took while filming in Canada.

She also shared this photo from the first night of filming, showcasing the beautiful location where they filmed.

Di Pace shared behind-the-scenes photos and videos from filming too.

Evans shared photos from filming too. She wrote: “Loving the smiles of my fabulous film family, especially our fearless leader & director #davidweaver! 🎬🍷💕”

The synopsis reads: “Aspiring Master Sommelier Jenna returns to her family vineyard to study and is intrigued by the natural methods of the handsome new, Argentinian winemaker, Marcelo.”

Laura Osnes is Jenna. She’s a Broadway singer with many Tony nominations. She competed in “Grease: You’re the One That I Want!” and won the role of Sandy,  IMDb reported. Her credits also include “Dynasty,” “A Killer Party: A Murder Mystery Musical,” “A Homecoming for the Holidays,” “In the Key of Love,” “City of Dreams,” “One Royal Holiday,” and more.

Crown MediaRaise a Glass to Love

Jennifer Huether portrays herself. According to her website, she’s a master sommelier, wine consultant, speaker, and spokesperson. She teaches wine classes, helps create and host VIP events, and is a spokesperson for some of the top wineries.

Have I Got News for You rescheduled after David Amess killing

Throwback! When Saif Ali Khan’s ex-wife Amrita Singh had said she didn’t want to hamper the actor’s budding career by having kids – Times...

America looms large in a new history of Cuba

Victoria Silvstedt, 46, shows off her sensational figure in Mykonos

Aryan Khan to get up at 6am with other inmates, will be served jail food only – Times of India

Peppa Pig is changing the way American children speak, according to confused parents