Zayn Malik reportedly had an affair with one-time TOWIE star Abi Clarke while he was in a relationship with Gigi Hadid.

The singer, 29, is said to have been ‘obsessed’ with the TV personality, 30, after seeing her from across a bar in Los Angeles, with the pair going on to have a secret fling.

Abi, who previously dated Floyd Mayweather, called Zayn ‘Mr Grey’ as they went on to meet up at his mansion in North London, according to The Sun.

Fling: Zayn Malik reportedly had an affair with one-time TOWIE star Abi Clarke while he was in a relationship with Gigi Hadid

Zayn split from supermodel Gigi in October, after six years together. They share a 16-month-old daughter Khai.

The reported affair only ended when Abi saw a text from the supermodel, 26, pop up on his phone, saying; ‘I miss you’.

The stunned television star, who joined TOWIE briefly in 2013, is said to have thought Zayn had broken up with Gigi when they began the fling and so ended things upon seeing the message as she ‘didn’t want to be his other woman’.

Of their fling Abi told her friend, according to the publication: ‘My experiences with him were like Fifty Shades of Grey. I called him my “Mr Grey”. We had a great time together.’ 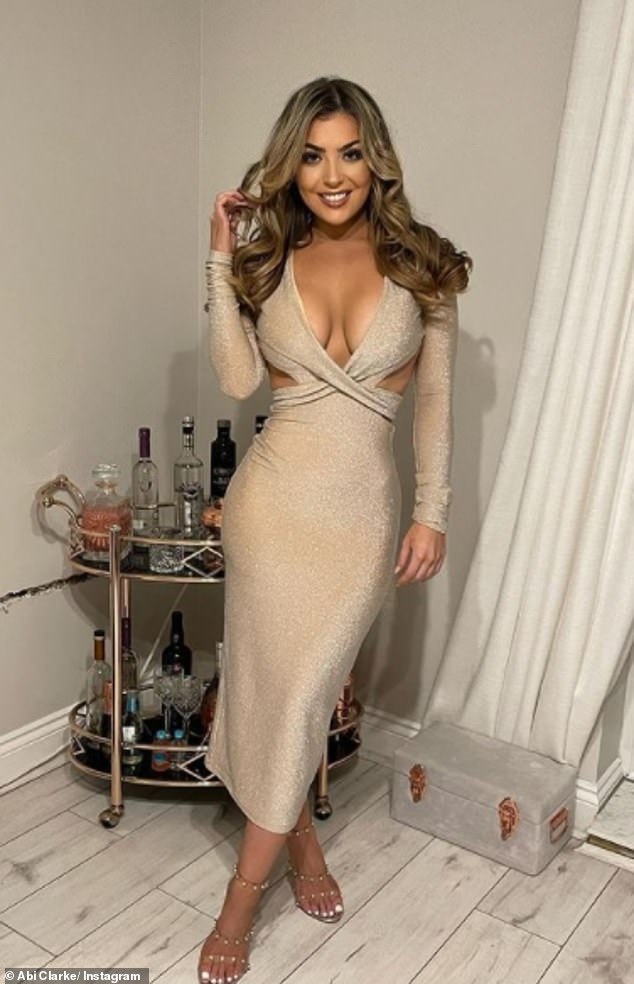 Affair: The singer, 29, is said to have been ‘obsessed’ with the TV personality, 30, after seeing her from across a bar in Los Angeles, with the pair going on to have a secret fling 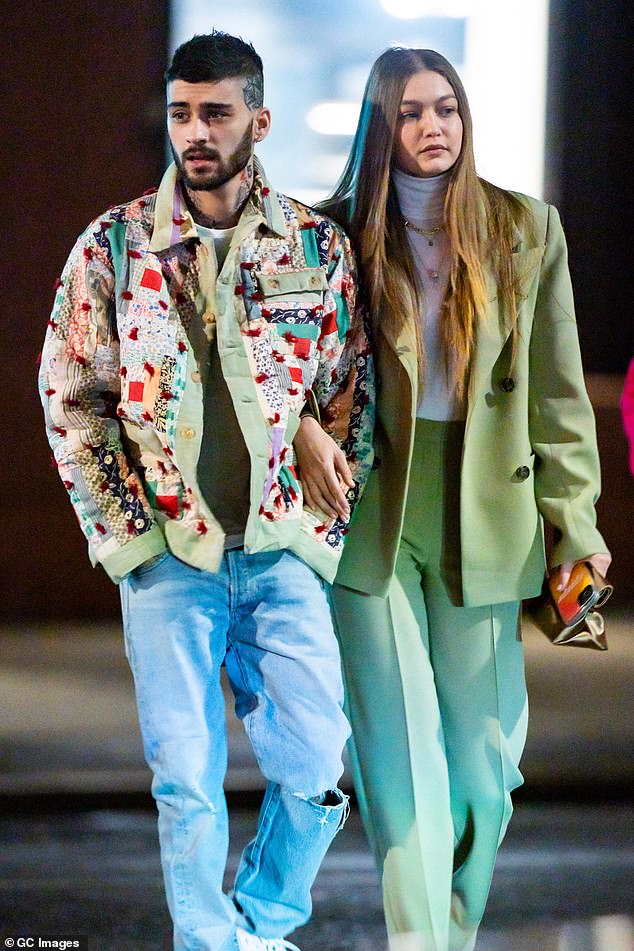 Exes: Zayn split from supermodel Gigi – who she shares 16-month-old daughter Khai with, in October (Zayn and Gigi pictured in 2020)

Abi reportedly told her pal Zayn told her she was his type as he loved ‘curvy girls with a big bum’.

The pair were said to have first laid eyes on each other at LA bar The Bungalow with Abi being invited over to Zayn’s table. The publication claims Zayn ‘moaned to her how there were lots of skinny girls in LA’.

Abi told her friend: ‘He said he liked my figure, He was very tactile, he was in an oversized black jacket and drinking brandy… he was all over me, kissing me,’ with Zayn’s manager ‘trying to get us somewhere private’.

The TV personality is also said to have told her friend that Zayn kept remarking that she ‘reminded him’ of his ex-fiancée Perrie Edwards, whom he dumped via text in 2015. 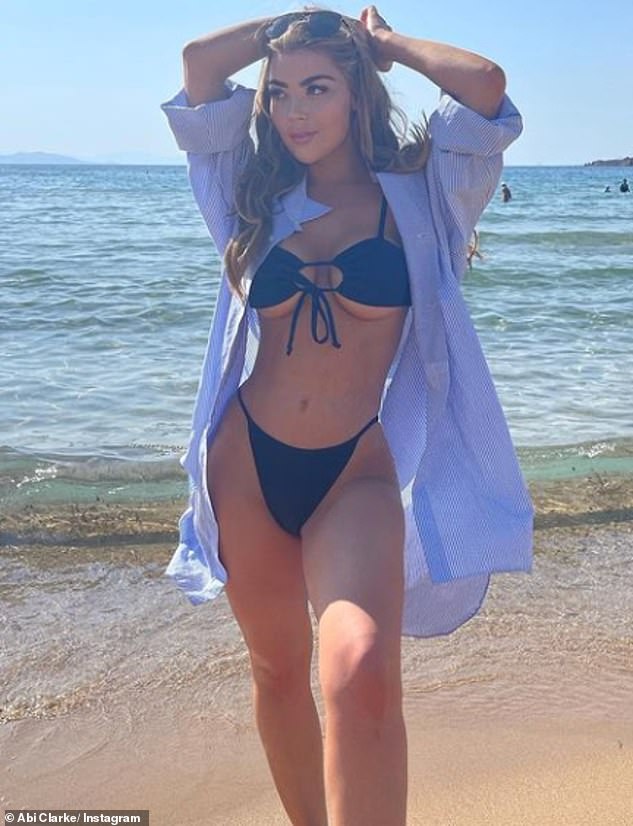 Done: Abi went on to describe to her pal the moment the romance came crashing down after she accidentally saw a message from Gigi on the phone, saying she was ‘stunned’ 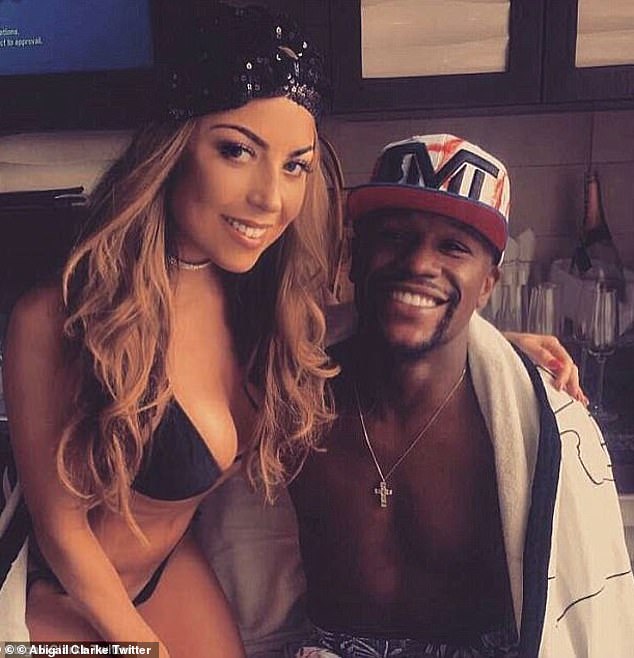 Liaisons: Abi previously dated Floyd Mayweather back in 2017(pictured together)

The pair are said exchanged numbers and went on to rendezvous at his £4million house in London.

Abi went on to describe to her pal the Pillowtalk hitmaker’s ‘incredible’ three-floor home, which was adorned with superhero figures and ‘cool street art’, while the home is also said to feature glass floors, a giant teepee in the garden and a old-school pub.

It is said the singer confided in Abi about everything from his family, his time in One Direction and even his split from Perrie, 28, telling her he was ‘really upset’ about how that relationship had ended.

Abi reportedly even believed she had a ‘future’ with the chart-topper after he serenaded his latest song at the time Dusk Till Dawn for her and even suggested she could be in the video.

The now property developer went on to describe to her pal the moment the romance came crashing down after she accidentally saw a message from supermodel Gigi on the phone, which read: ‘I miss you’. 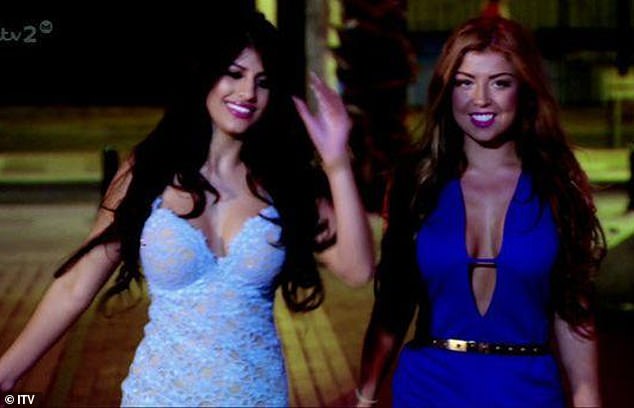 Cooling it: The stunned television star joined TOWIE briefly in 2013 and now has a career as a property developer (pictured on TOWIE with former co-star Jasmin Walia)

The pal said she told her: ‘I was stunned. It made me feel really s***. I went very quiet. He’d made it clear he was single. He was so attentive to me I thought it must be true. We were seeing a lot of each other and you grew feelings. It was very awkward.’

Following the end of their alleged fling, Zayn is said to have returned to LA full time, but Abi wasn’t far from his mind as some time later he FaceTimed her at 3am from the US.

MailOnline have contacted Zayn and Abi’s representatives for comment.

The explosive revelation comes just days after it was reported that Zayn had signed up for plus size dating site WooPlus, three months after he split from Gigi following an altercation with the model’s mother Yolanda.

The former One Direction star joined the site which describes itself as an ‘inclusive’ platform for ‘curvy people to find and enjoy love.’

Zayn told Billboard back in 2016 that he likes ‘fuller women’, saying: ‘I like girls that are a bit chunky in certain areas — the nice areas. I like a fuller woman.’

The app uses facial recognition technology to aid in the verification of its users, and a clip of Zayn taking part in an emoji challenge on the website has been leaked online.

The star can be seen with a huge bushy beard, pulling faces to match the emotions of the smiley faces, including happy and angry.

The appearance on the app comes after he split with Gigi back in October, following an altercation with the model’s mother.

Zayn pleaded no contest to four harassment charges in October and was sentenced to 360 days probation, an anger management course and told he must have no contact with Yolanda or a security guard who witnessed the fight. 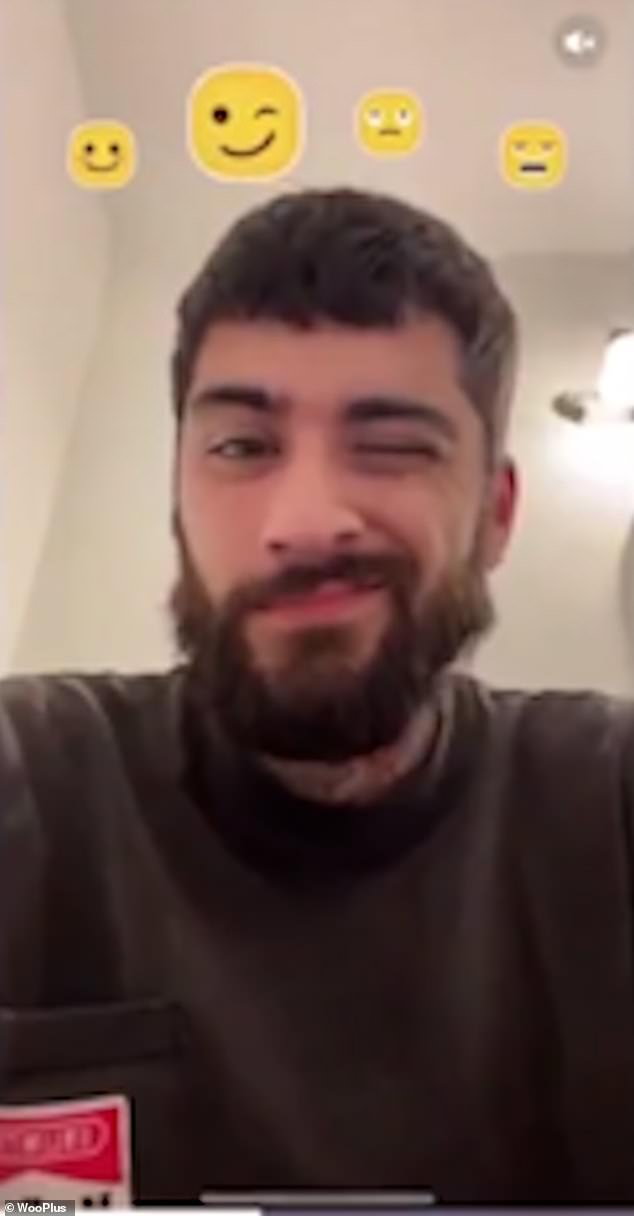 Looking for love: It comes after Zayn was seen on the plus size dating site WooPlus, just months after splitting with Gigi after an altercation happened with the model’s mother Yolanda 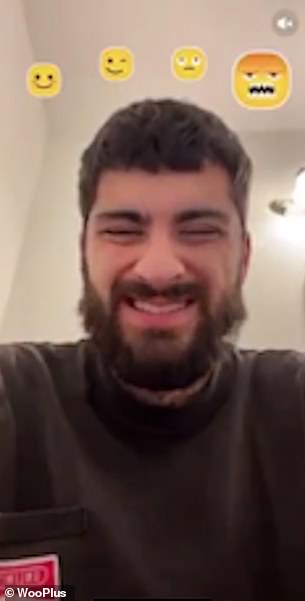 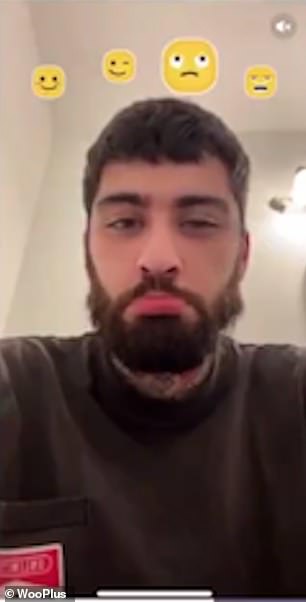 Pulling faces: The app uses facial recognition technology to aid in the verification of its users, and a clip of Zayn taking part in an emoji challenge on the website has been leaked online

He denied the claims made against him which include him pushing the reality star into a dresser and calling her a ‘s**t.’

The incident happened after a fight at the home in Pennsylvania he shares with Gigi Hadid and their daughter Khai. Gigi was modelling in Paris and Yolanda let herself into the couple’s home, seemingly without Malik’s consent

He is then said to have phoned Gigi in Paris and berated her down the phone, screaming: ‘Strap on some f*****g balls.’ 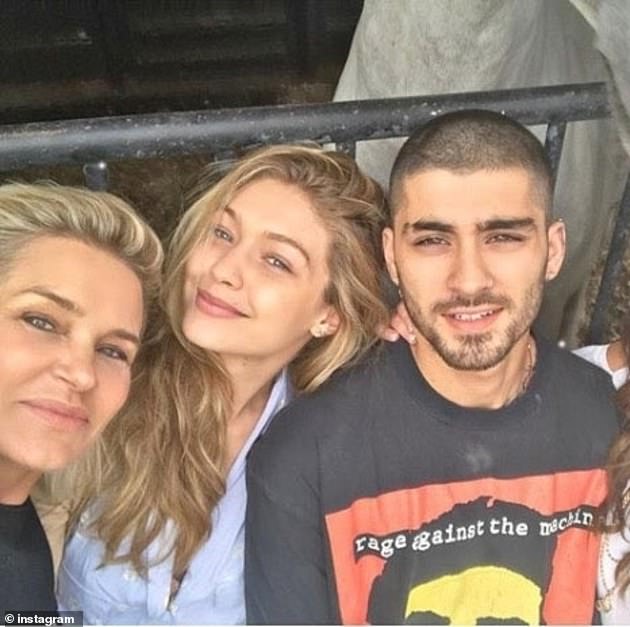 All over: Zayn split with Gigi back in October, following an altercation with the model’s mother Yolanda, Gigi, Zayn pictured

A security guard witnessed the event and he yelled at him: ‘Get the f*** out of my f***ing house copper,’

Zayn posted a statement on social media at the time that confirmed there was an incident, that he pleaded no contest (although it was unclear at the time that he’d been criminally charged) and that he was trying to protect his daughter.

He denied striking Yolanda, as had been reported by TMZ, citing an unnamed source. He said: ‘As you all know I am a private person and I very much want to create a safe and private space for my daughter to grow up in.

‘A place where private family matters aren’t thrown on the world stage for all to poke and pick apart.

‘In an effort to protect that space for her, I agreed to not contest claims arising from an argument I had with a family member of my partner’s who entered our home while my partner was away several weeks ago.

‘This was and still should be a private matter but it seems for now there is a divisiveness and despite my efforts to restore us to a peaceful family environment that will allow for me to co-parent my daughter in a manner in which she deserves, this has been ‘leaked’ to the press.

‘I am hopeful though for healing for all involved with the harsh words shared and more importantly I remain vigilant to protect Khai and give her the privacy she deserves.’

The tension between Zayn and Yolanda allegedly began when he suspected her of leaking news of Gigi’s pregnancy to the media, according to an unnamed source cited by The Sun. 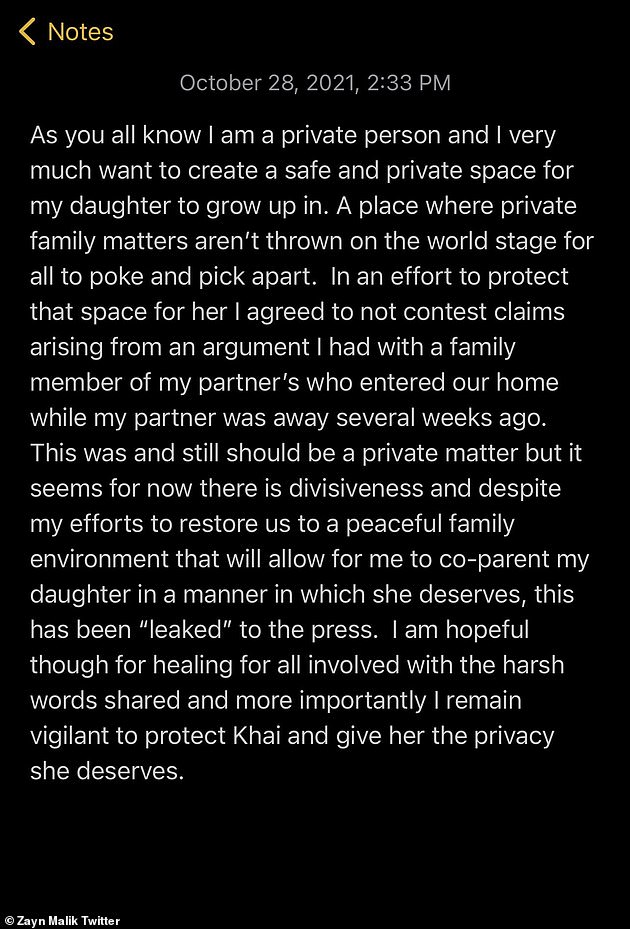 Airing it out: Zayn posted a statement on social media at the time that confirmed there was an incident, that he pleaded no contest and that he was trying to protect his daughter

The 5 biggest Oscar snubs and surprises, from Lady Gaga to Ruth Negga

13 books to read before their adaptations are released this year