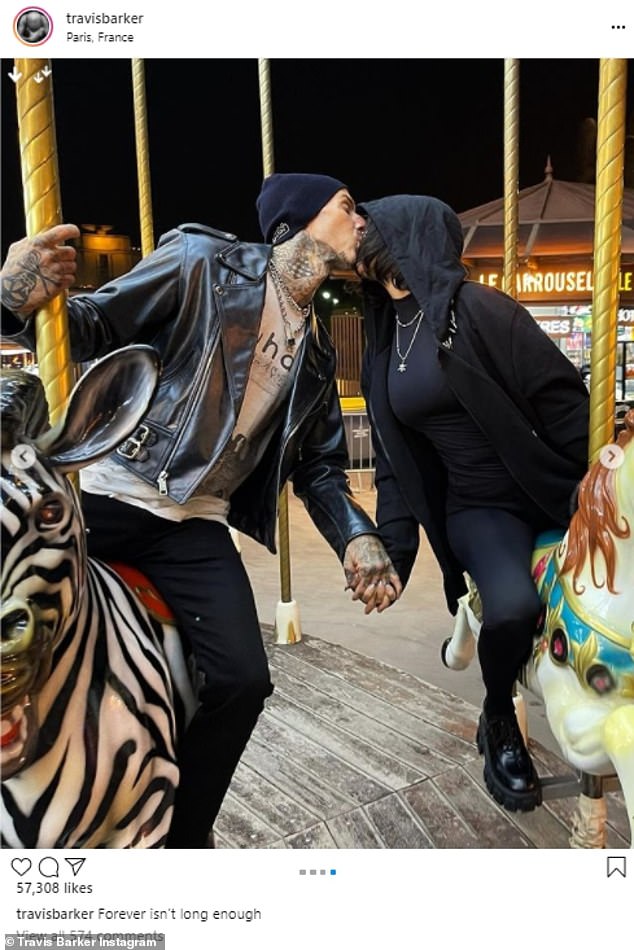 Travis Barker is not letting Scott Disick deter him from sharing his affection for girlfriend Kourtney Kardashian in a public way.

On Friday the 45-year-old Blink-182 drummer posted a series of PDA packed snaps with the POOSH founder from their recent Paris trip, while hinting about marriage.

‘Forever isn’t long enough,’ he wrote as he posted snaps of them kissing in front of a lit up Eiffel Tower and on a carrousel.

The longtime friends turned lovers looked beyond enamored with each other, as they soaked up the most romantic city in the world by each other’s side.

A trio of Eiffel Towers photos showed the reality star matching her boyfriend’s edgy style in jeans and a black hoodie with stylish combat boots as they embraced and held hands before she straddled him for a kiss.

And on the carrousel the two passionately kissed while holding hands — not tapering back any affection despite recent bitter criticism from Disick.

Based on his caption about ‘forever’ it seems the pair are planning a future together, and The Sun recently reported that they’re trying to ‘combine the two families’ and that Kardashian wants Barker to be ‘step-dad’ to her three kids: Mason, 11, Penelope, nine, and Reign, six. 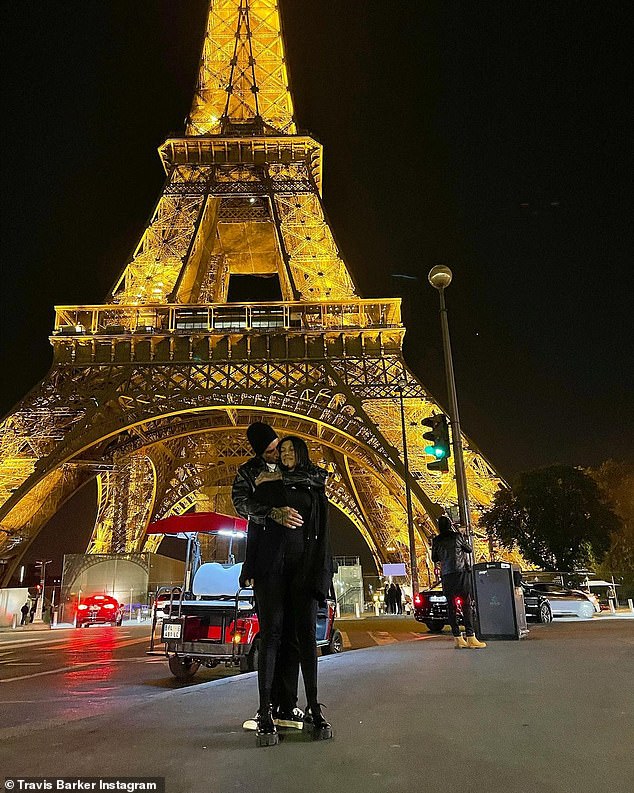 True romance! The loved pair were seen taking in Paris at night as they posed in front of a lit  up Eiffel Tower 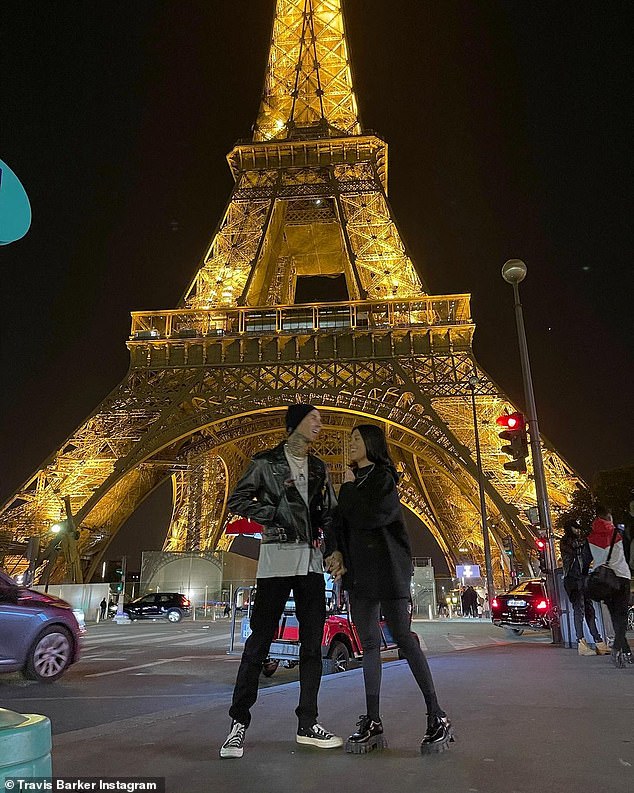 Paris is for lovers: The duo paid no mind to any criticism about their PDA as they clasped hands and kissed throughout the course of the images 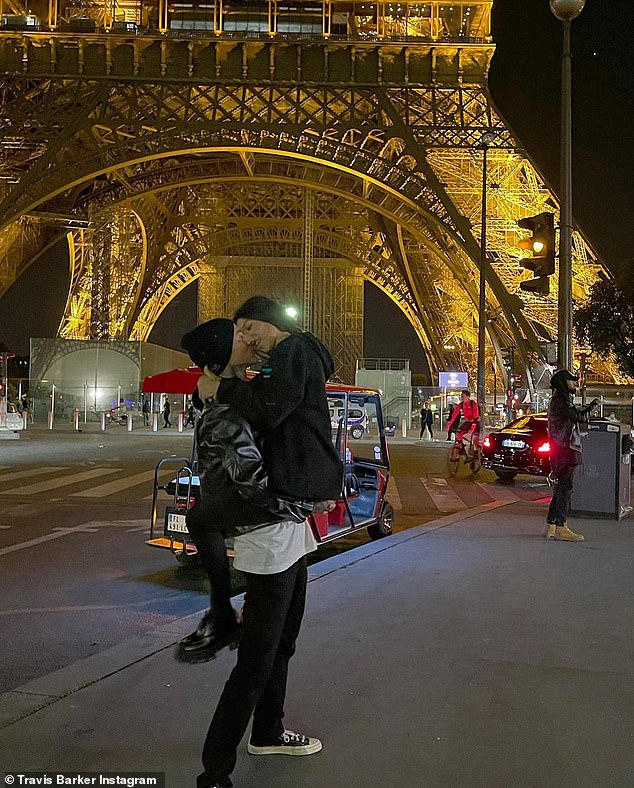 Mrs. Barker? Based on his caption about ‘forever’ it seemed marriage could be in the cards and a source had previously reported that they had ‘talked about marriage’

‘Kourtney and Travis are loved up but what’s causing a headache is the plans to combine the two families. Right now Kourtney and Travis live minutes away from each other, but they want to move in together to start a new chapter, and that means all their kids need to be involved in the plan too.’

It was added: ‘When he’s not with his kids, Travis spends all his time at Kourt’s – and he more or less lives there,’ and that ‘Kourt wants Travis to be step-dad to her kids, and her to his.’

The duo had first sparked engagement rumors during a trip to Las Vegas in July, after his daughter Alabama Barker, 15, re-posted an image of the pair with the caption ‘So happy for you guys’ and later referred to Kourtney as her ‘stepmom’ in an Instagram live.

Her hairstylist Glen Oropeza had also commented on an image: ‘NOWWW I understand why ppl tie the knot in Vegas’ with the chapel emoji — but later changed it. 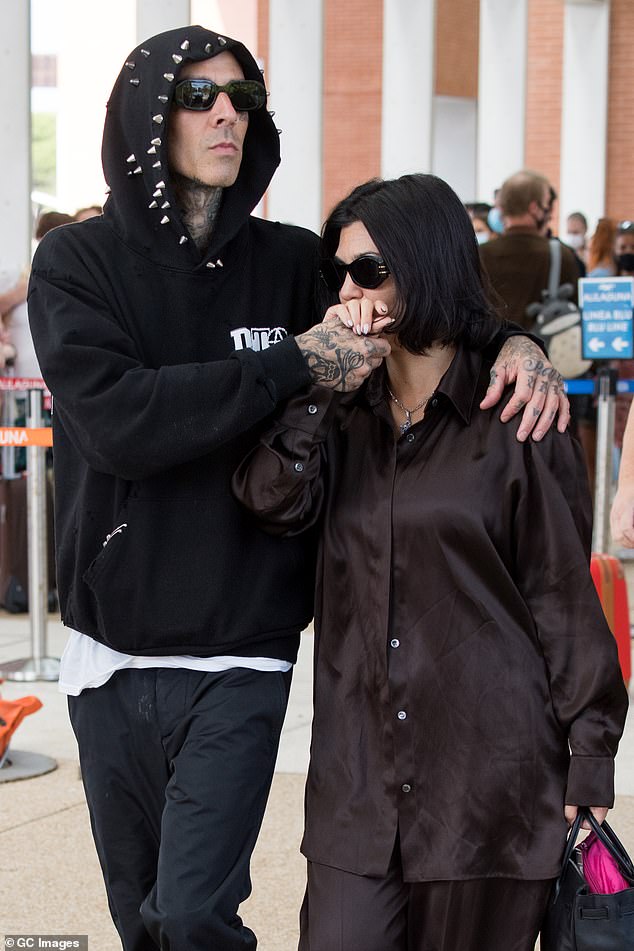 Building a future: ‘They want to move in together to start a new chapter, and that means all their kids need to be involved in the plan too,’ a source told The Sun; pictured August 31

Though the pair have never addressed any of the chatter, it has been reported that marriage has definitely been discussed.

‘Kourtney and Travis have talked about marriage,’ an insider told E! News. ‘It was an instant connection and bond ever since they became romantically involved…They are in it for the long haul.’

On August 31, however, Disick seemed to try and dim the pair’s sparkle as he sent a snide direct message to her ex boyfriend Younes Bendjima — who put the Talentless designer on blast by sharing the DM on Instagram.

Scott message the French-Algerian model, 28, who Kourtney dated from 2016 to 2018 with the message: ‘Yo is this chick ok!????? Brooo like what is this. In the middle of Italy,’ accompanied by a DailyMail.com photo of the pair having a heated makeout. 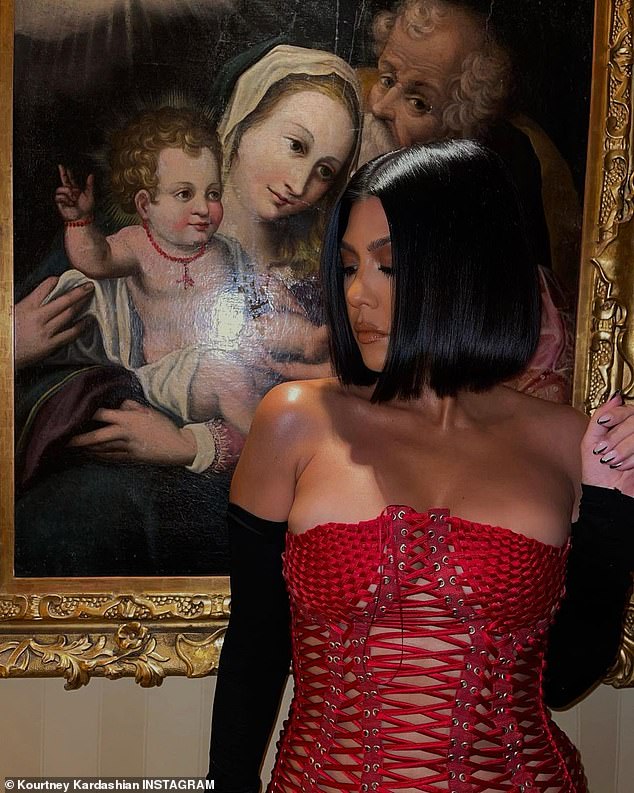 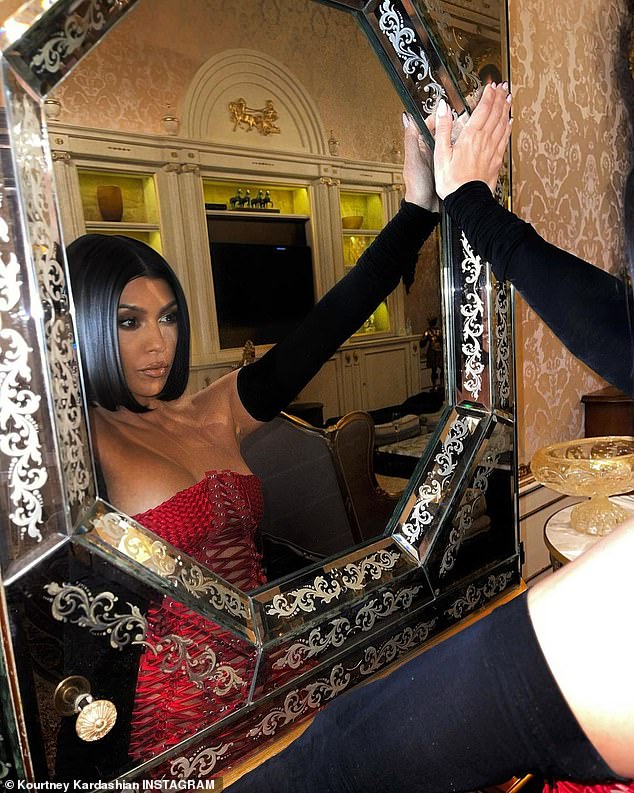 Brewing tenison:  ‘Kourtney doesn’t want her kids seeing anything online that makes it look like their parents don’t get along,’ an ET source said of her reaction to the leaked DM

Younes responded back: ‘Don’t matter to me as long as she’s happy. PS: i aint your bro,’ and later said that he ‘couldn’t miss’ the opportunity to share the message as Scott had been ‘playing around for too long.’

After the leaked DM, Us Weekly reported that Scott was ‘riled up’ because her new romance was affecting their relationship.’It’s more strained than ever,’ the insider said.

It was added: ‘He doesn’t think she should be showing off too much PDA because of their rated-R behavior. The kids are still young and can easily find paparazzi photos of them on their phones.’

A second ET source said that though she and Travis ‘don’t care’ about Scott’s opinion ‘Kourtney is upset it’s now public.’  ‘Kourtney doesn’t want her kids seeing anything online that makes it look like their parents don’t get along.’ Shady business: Disick had sent the above message to Younes which he leaked on Instagram 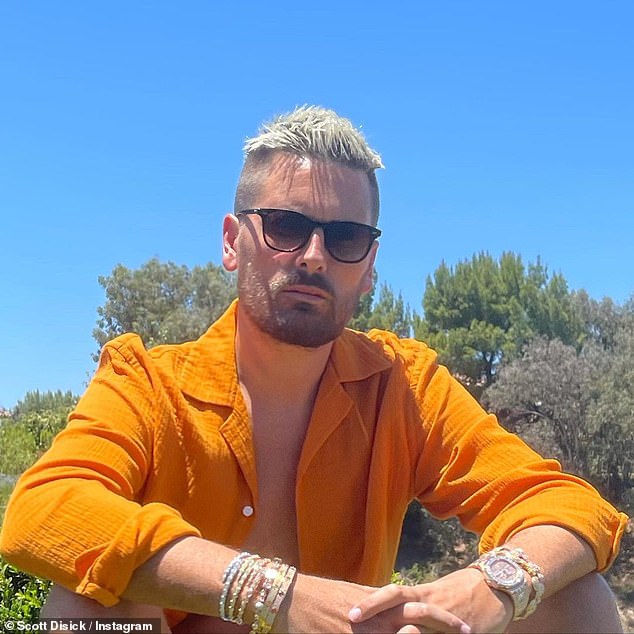 Bitter: An Us Weekly source said ‘He doesn’t think she should be showing off too much PDA because of their rated-R behavior’ and was worried that their three kids could find the racy images online

And PEOPLE reported that Kourtney had plans to ‘confront’ Scott once she got back to the US but was ‘not shocked’ he would stoop to that level.

‘She was surprised, but not shocked,’ the source said. ‘Scott has always had a difficult time accepting that Kourtney is happy with someone else. He is especially threatened by her relationship with Travis.’

‘She will confront him about it,’ it was added, and though it is currently unknown if she has exchanged words with her baby daddy, Kourtney touched down in the US a few days ago.

In the interim Barker had seemed to laugh the whole thing off as he shared an image of Ray Liotta from Goodfellas laughing hysterically. 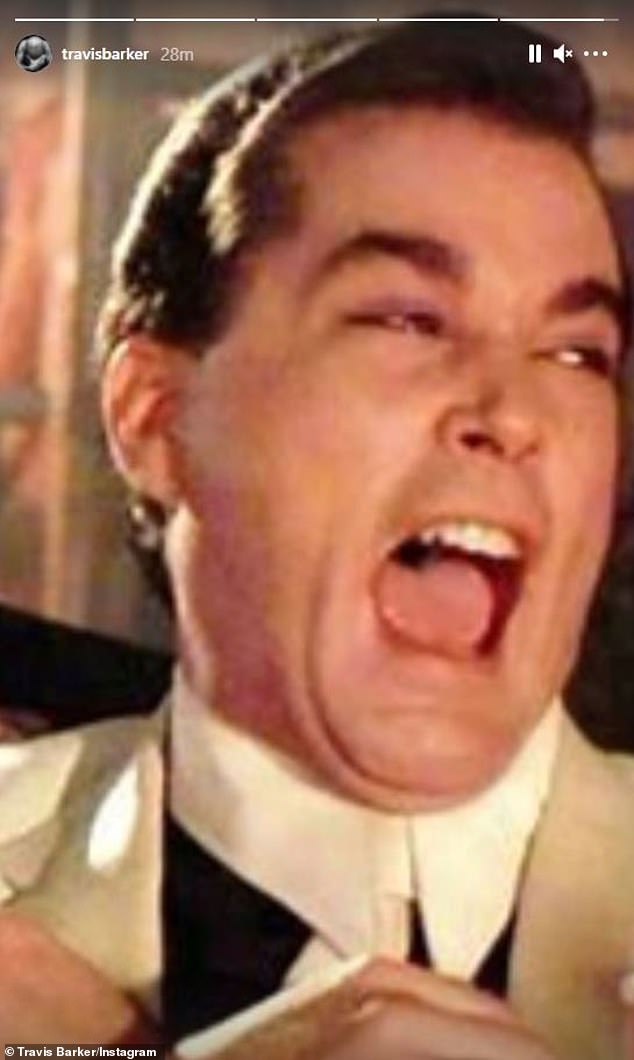 Travis’ response: Barker had seemed to laugh the whole thing off as he shared an image of Ray Liotta from Goodfellas laughing hysterically

The best and worst ways to tackle linguistic sexism

Cozy Management Games Remind Us How to Care