By Ashleigh Gray For Dailymail.Com

Patrick and Christopher Schwarzenegger celebrated the Fourth of July holiday weekend in Idaho with pals.

The 28-year-old actor and his brother, 24, were spotted on a boat with the likes of Olivia Jade Giannulli and her sister Bella, 22 and 23.

His dark hair was wet from a dip in the lake and he carried a blue and white striped towel in his hand.

Meanwhile his younger sibling flaunted his recently slimmed down figure as he relaxed during the outdoor activity.

The collective of friends enjoyed each other’s company as they soaked up the sun during the annual holiday.

They were seen indulging in refreshments and at one point Olivia sported a celebratory headband with red, white, and blue stars. 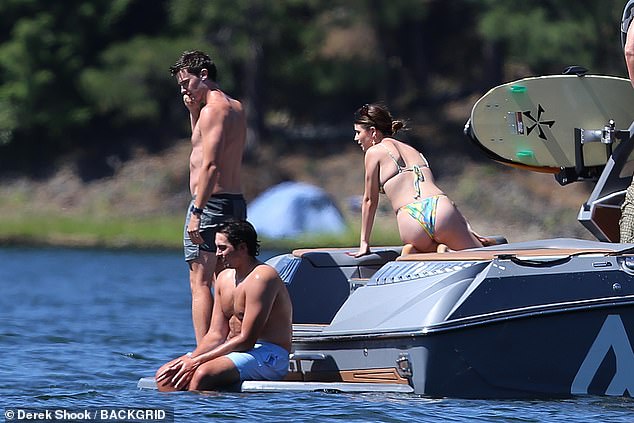 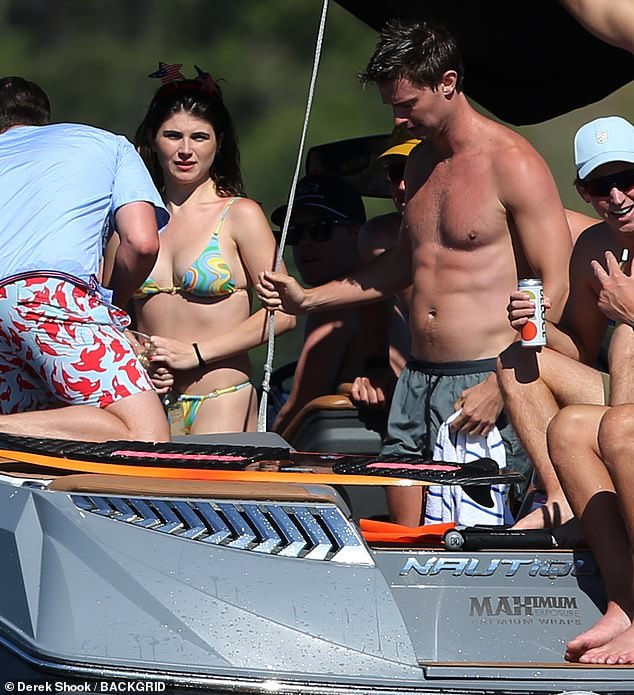 Group hang: The 28-year-old actor was spotted shirtless on a boat with the likes of Olivia Jade Giannulli, 22, and her sister Bella, 23 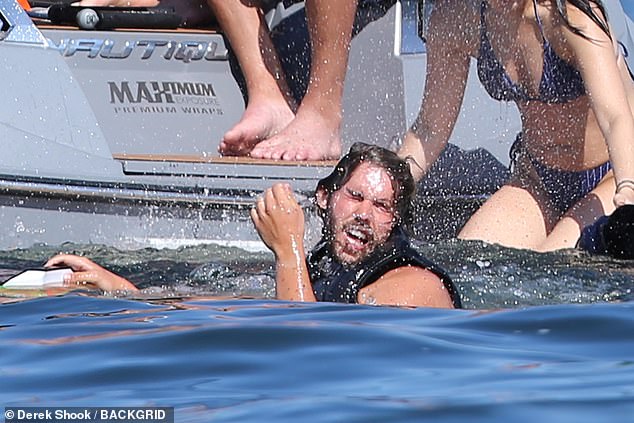 Safety first: Christopher splashed about as he donned a black life vest during the day in the sun 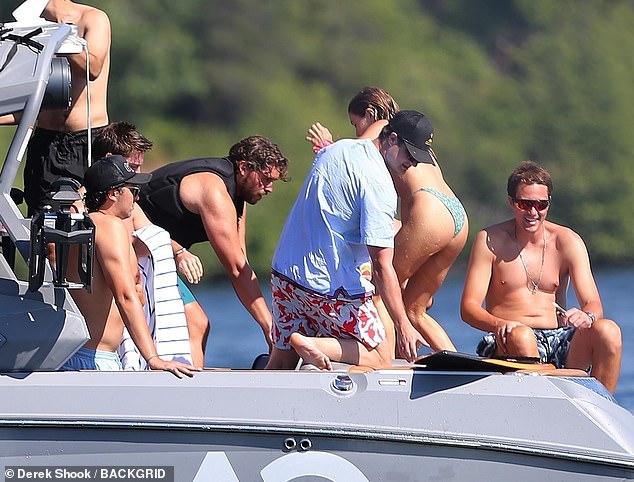 Quality time: The friends were seen chatting and laughing on the small boat

Posting to his 1.3 million followers, he turned to the app’s Stories feature to upload a clip of him wakesurfing.

He showed off his athletic prowess as he trailed behind the boat with graceful skill. 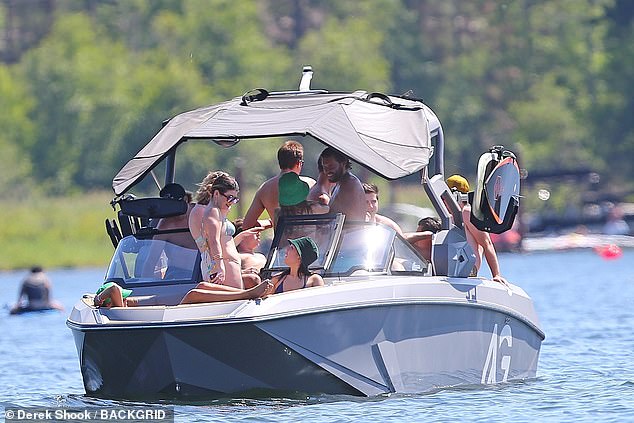 New and improved: Chris showed off a significant amount of weight loss as he flaunted his trim figure 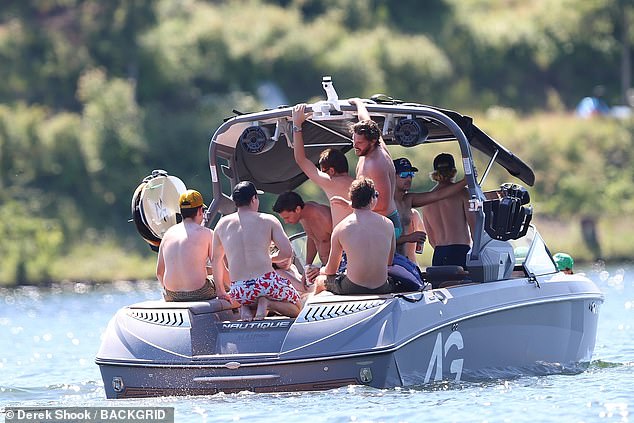 Good times: The collective sure knew how to have a good time ahead of the holiday 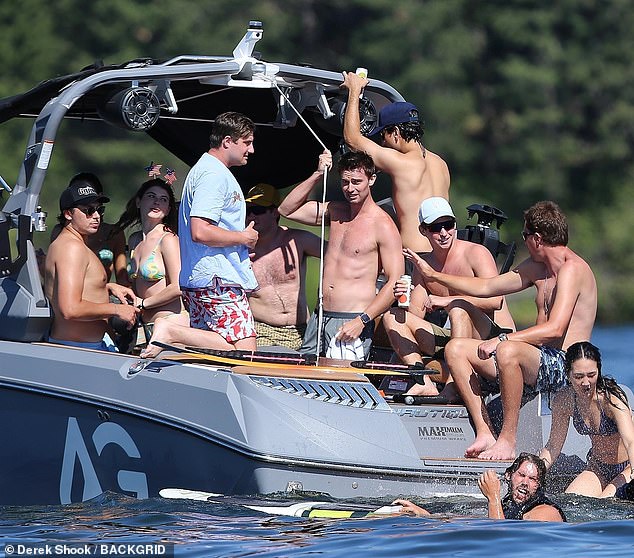 Party time: A number of people joined together to hit the water in the premiere summer location 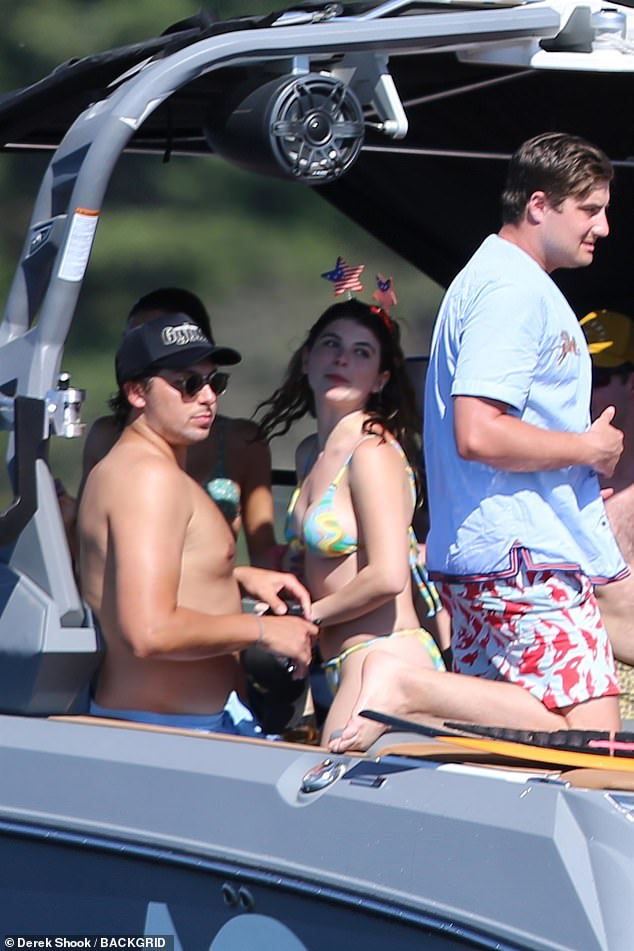 Having a good time: They were seen indulging in refreshments and at one point Olivia sported a celebratory headband with red, white, and blue stars

It comes after Patrick recently attended the premiere event for the thriller-drama series The Terminal, in which his brother-in-law Chris Pratt stars.

He was joined by his longtime girlfriend, model Abby Champion, who snuggled up to him on the red carpet.

The 25-year-old beauty posed with her beau for a series of snaps as she donned a white dress with matching open-toe heels. 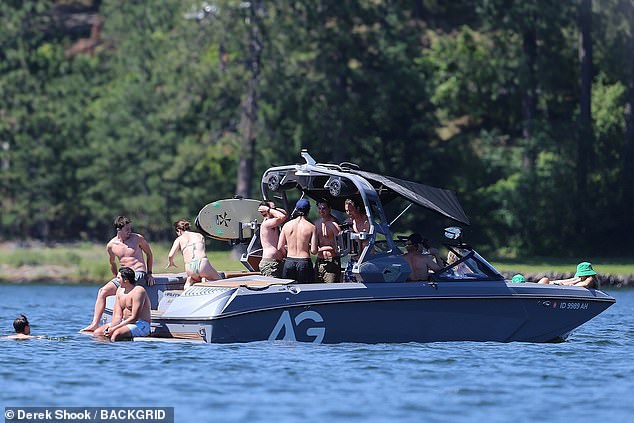 Memorable: The group lounged about as they luxuriated in the low-key location

Based on the novel by former Navy Seal Jack Carr, the series follows James Reece (Pratt) after his platoon is ambushed.

Reece later returns home with conflicting memories of the event and concerns about his culpability.

As new evidence emerges, Reece discovers dark forces working against him, endangering not only his life but the lives of his loved ones.

Jumping in: They wasted no time submerging themselves in the cool water as they celebrated the holiday

When does the Glastonbury 2022 ticket resale open?

Why Did Diana Muldaur Leave “Star Trek: The Next Generation?”

Paralympian who glued himself to plane in climate protest is jailed

Ind vs Zim: ‘Dhoni Would Advice Kuldeep On What to Bowl’, Says Former Cricketer After Spinner Returns Wicketless