Escape to the Country star Nicki Chapman has revealed her brain tumour has mysteriously gone – and said she broke down on receiving the news while filming in a field full of pigs.

The former Pop Idol judge, 55, was diagnosed with a non-malignant brain tumour – which had grown to the size of a small golf ball – in 2019, but could only have part of it removed because it was too dangerous to take it all out.

She was warned that the life-saving surgery posed the risk of permanent loss of speech, sight or movement. Although she revealed she currently only has reading and concentration difficulties, she has gone on to have regular checks since.

‘I hope the b*****d never comes back’: Nicki Chapman has revealed her brain tumour mysteriously vanished three years after her diagnosis (pictured in November)

Now Nicki has revealed publicly for the first time that she was given the shock but welcome news that the growth – which she named Bert – vanished just over four months ago.

She said on the White Wine Question Time podcast: ‘Back in October I was having my yearly scan with my fantastic consultant, who he knows that I adore him.

‘I tell him regularly in front of my husband how much I adore him and the NHS that looked after me and continue to look after me so well. 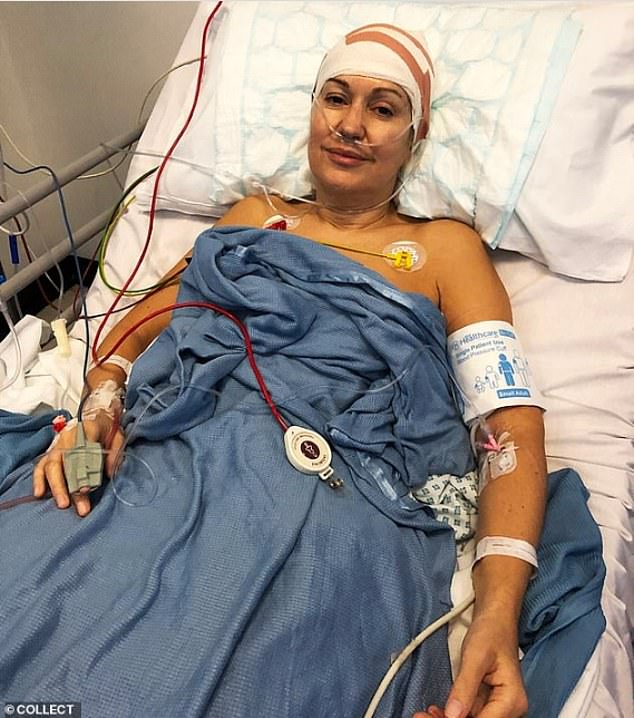 Horrific: Nicki was diagnosed with a non-malignant brain tumour – which had grown to the size of a small golf ball – in 2019, but could only have part of it removed

She continued: ‘I knew I was getting the call, so they moved away, and they gave me some privacy. And I’m looking at all these pigs.

‘The amazing consultant rang me and said “the tumour, Nicki, has gone. For the moment it’s disappeared”.

‘I get a bit teary just thinking about it. And they don’t know why. And obviously I’ve still got to be monitored because these things have habits of changing.

‘So we take the good when we can. Always look for the win in every situation. So Bert for the moment has gone and in the nicest of ways I hope the b****”d never comes back.’ 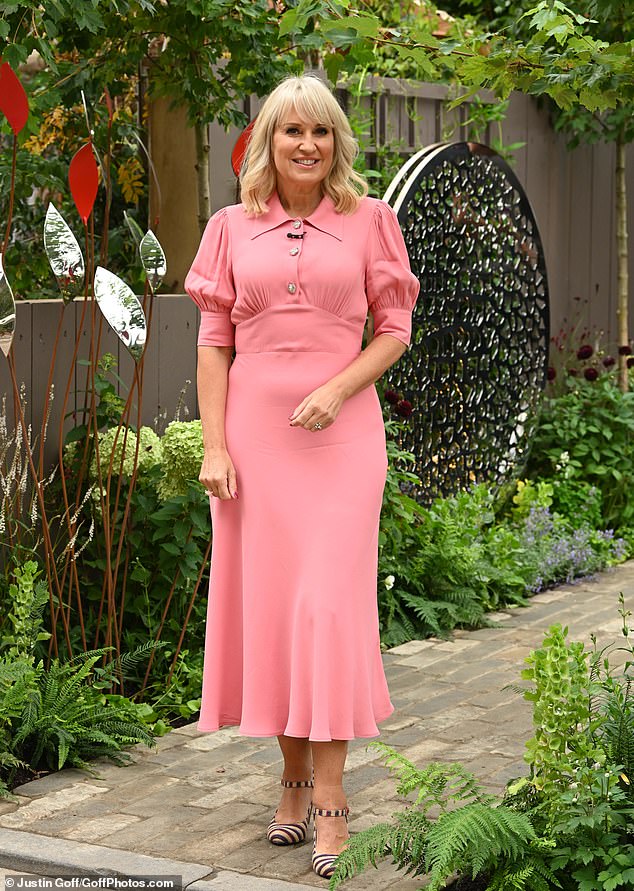 Great: Now Nicki has revealed publicly for the first time that she was given the shock but welcome news that the growth – which she named Bert – vanished just over four months ago

Nicki also reflected on first receiving her diagnosis, with her husband telling her she seemed ‘high’.

Nicki explained that was her relief at being told she could survive – and she was even willing to accept losing the sight of one eye in return if necessary – but still re-did her will the day before her operation.

Explaining why part of the tumour had to remain as a dark cloud hanging over her, she said: ‘They had to leave a slither of him in because of where it was. It was too dangerous to take out for whatever reason.

‘At the moment it’s gone. There’s no trace – just the scar tissue – and so the NHS will keep monitoring me and I will happily to every appointment that they ask me to go to.

‘But yeah, life-changing absolutely. And I wouldn’t want anybody to go through anything like that. So many people sadly are and do, and I know I am fortunate.’ 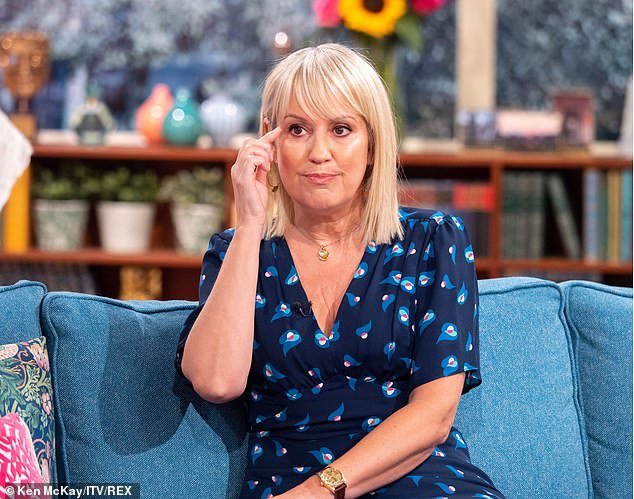 Nicki said: ‘I get a bit teary just thinking about it. And they don’t know why. And obviously I’ve still got to be monitored because these things have habits of changing’

She continued: ‘And fortunately it was benign, but even to live with it wasn’t great. What will I look like? How will I be? I did my will the day before I went in for my operation.

‘For my husband the first thing I said “was right we’re going to re-do the will”. And he was so brilliant.

‘I told very few people because it is life-changing. It is the biggest thing. It’s amazing what you will accept in life. You do find strength that you didn’t know you had. We knew it was big. They said “you’ve got a large tumour”. They thought I’d had a stroke.

‘But it’s taking each day and not knowing if you’re going to live or not.’

Nicki, 55, who is married to music executive Dave Shackleton, added: ‘We came out and Shack’s like “are you sure you’re ok, you seem quite high?”

‘And I was like “Shack, he’s told me I’m going to live – unless something goes wrong on that operating theatre, which can happen, I’m going to live. I’ll take be partially-sighted or whatever”.

‘After my operation everything went in my favour and six weeks to the day I was filming.

‘I did check with my consultant. I did go and see him and say “I really want to go back to work, I thought I was going to be ill for over three months”.

‘And he went “yes, so did I”. I said “am I mad going back to filming?” I said “they’ll look after me”. And he’s like “you know what, if I couldn’t perform surgery for six weeks I’d be going mad and I can see the same with you”. So I did get signed off. 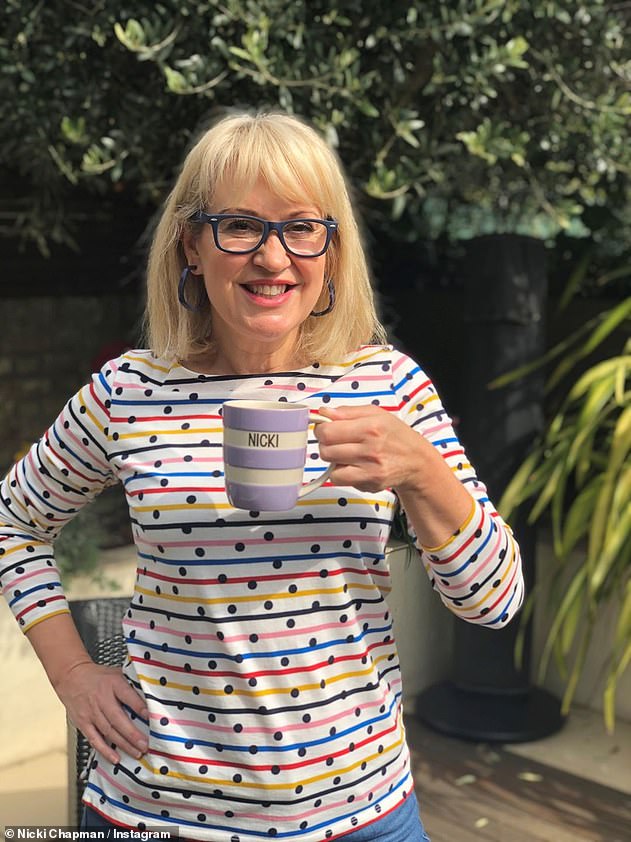 Warning signs: Nicki first realised she was ill when she went to do a voice-over and couldn’t remember the name of an executive producer who she had known for 15 years

‘The only thing I have is I struggle reading now, which is a small price to pay for my health. My concentration isn’t as good as it was. I find it hard to read books – I don’t know why. Apart from that, I take each day. I’m very grateful.

‘The NHS are incredible and I’m going to look for the win. It’s not going to define me. I will get on with my life.

‘That’s important for me. Everyone deals with everything in very different ways, but for me it’s not Nicki Chapman with a brain tumour, it’s always about being me.’

Nicki had first realised she was ill while working on the BBC property programme Escape to the Country when she went to do a voice-over and couldn’t remember the name of the executive producer, who she had known for 15 years.

She later said: ‘I came back and did a photoshoot and couldn’t see, I did a voice over and I couldn’t speak, nothing would come out. It lasted about five to ten minutes.’

HOW DO TUMOURS GROW?

Cancer cells initially stay within the body tissue from where they developed, for example the breast ducts.

They then grow and divide to create more cells, which end up being a tumour. A tumour may contain millions of cancer cells.

All body tissues are surrounded by a membrane that keeps its cells inside. If cancer cells break through this layer, the tumour is called invasive.

As a tumour grows, its centre moves further away from the blood vessels in the area where it is growing.

This causes the centre to have less oxygen and nutrients, which cancer cells cannot live without. They therefore send out signals, called angiogenic factors, that encourage new blood vessels into the tumour.

Once a tumour has its own blood supply, it can rapidly expand by stimulating the growth of hundreds of new capillaries to bring it oxygen and nutrients.

As it grows, the mass puts pressure on surrounding structures. But how it enters these tissues is not fully understood.

One theory is it forces itself into normal tissue. This blocks blood vessels, which causes the healthy tissue to die and makes it easier for the cancer to continue to spread.

Many cancers also contain high levels of enzymes that break down healthy cells and tissues.

They also produce a mysterious substance, which growing research suggests stimulates them to move, however, this is unclear.

‘Jackass Forever’ Is More of the Same Dick Jokes, Insane Stunts and Bodily Harm. Which Is Why It’s F-cking Great

Farrah Abraham Treats Herself to Butt Injections For Mother’s Day

Ayush Mehra: I really like Ranbir Kapoor and Vicky Kaushal because they push themselves so much as actors – Times of India

Interview: Leila Slimani, author, The Country of Others – ‘Identity depends very much on how people look at you’