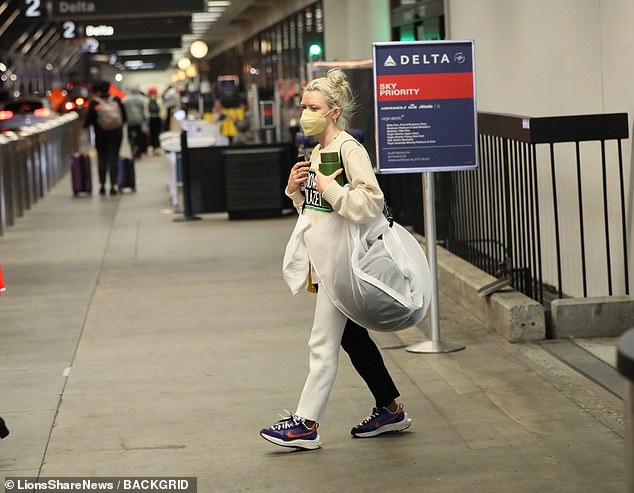 By Ella Hodson For Mailonline

Maisie Williams made a low-key arrival into LA on Friday wearing sweatpants which had one black leg and one white leg after her trip to New York for the Met Gala.

The Game of Thrones actress, 24, is not one to shy away from kooky dressing, and she paired the comfy ensemble with an oversized knitted jumper with green and blue graphic printed on the front.

She wore a pale yellow mask across her face while she carried a translucent bag over her shoulder.

Casual: Maisie Williams, 24, looked low key as she arrived in Los Angeles on Friday wearing sweatpants with one black leg and one white leg

On her other shoulder she carried a white cotton tote bag as she stepped into a waiting black car.

Her platinum blonde locks were swept back into a relaxed bun revealing her bleached eyebrows.

On her feet she kept things comfortable by donning purple and orange chunky trainers, while she gripped hold of a green water bottle in her hand. 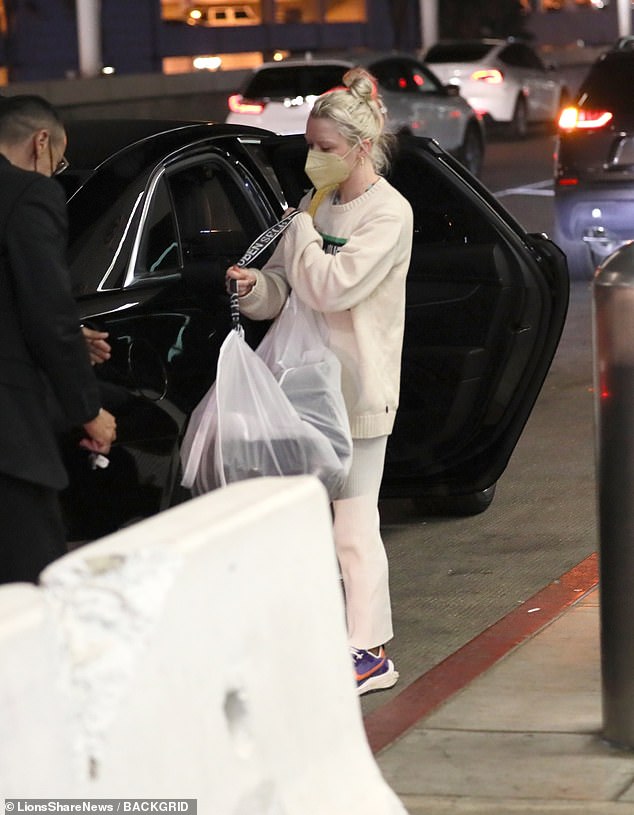 Relaxed: The actress is not one to shy away from kooky dressing, she paired the comfy ensemble with an oversized knitted jumper with green and blue graphic printed on the front

Maisie attended the Met Gala held at the Metropolitan Museum of Art in New York wearing an outfit designed by her boyfriend Reuben Selby in a homage to The Matrix.

The quirky look consisted of a voluminous cape that she layered over a bodysuit and paired with sheer stirrup tights and heels.

She dyed her hair for her role as punk model Pamela Rooke in the miniseries, which is about punk band the Sex Pistols.

The drama series began filming in March this year, though no official release date has been confirmed yet.

As an environmentalist, Maisie recently produced Searching for Chinook – a documentary to fight for the survival of the last 72 Southern resident orcas.

She also helped launch WaterBear alongside Sir David Attenborough – the first global video streaming platform dedicated to the future of our planet.

Last month, Maisie launched her new production company Rapt which is said to be ‘committed to amplifying the diverse range of voices and outlooks of a new generation.’ 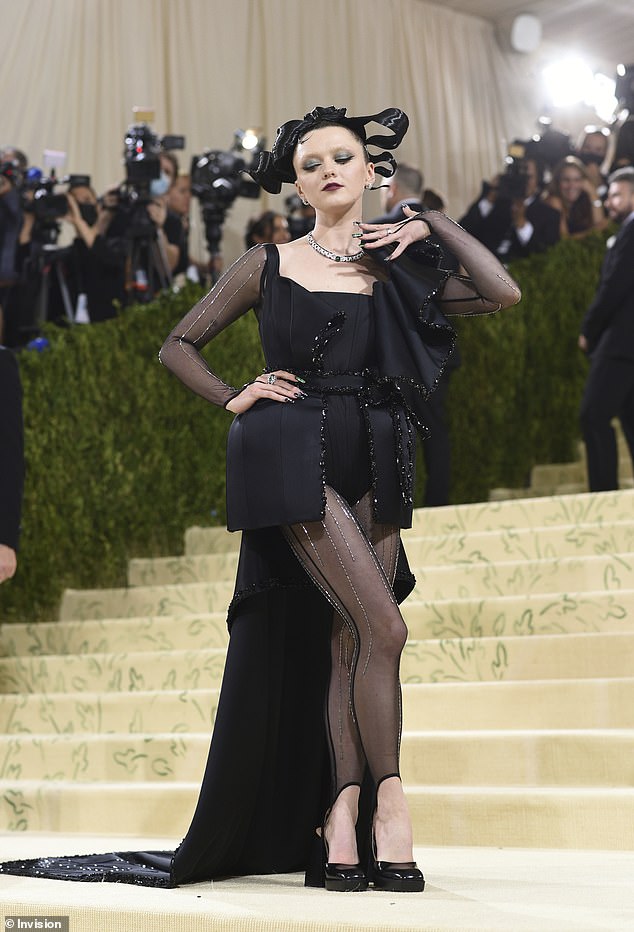 Glamour: Maisie attended the Met Gala on Sunday. Her look consisted of a voluminous cape that she layered over a bodysuit and paired with sheer stirrup tights and heels

WATCH: ‘Star Trek’ Insiders Give a Tour of the ‘DS9’ Enterprise Set

Piers Morgan responds after losing to Ant and Dec at NTAs

Is Mr. Miyagi from The Karate Kid Still Alive?

Up to 20,000 Brits given unapproved Covid vaccines will be given Pfizer or Moderna

TikTok is on the Gabby Petito case. Are these true crime sleuths helping solve it?