Leigh-Anne Pinnock – who gave birth to twins just six months ago – shared a sexy snap to Instagram on Wednesday during her sun-soaked Jamaica getaway.

The Little Mix bandmember, 30, showcased her washboard abs in a bikini top featuring the country’s flag, along with a pair of black bottoms.

Posing against an idyllic ocean backdrop, she smouldered up a storm as she looked into the distance while standing on a jetty.

Wow! Leigh-Anne Pinnock exhibited her washboard abs in a skimpy Jamaican flag bikini during her sun-soaked getaway to the Caribbean island in a Tuesday Instagram post… six months after giving birth

The singer tucked her gorgeous brown curls behind her ear and went make-up free to highlight her natural beauty in the stunning shot.

She welcomed her baby twins with her fiancé Andre Gray in August.

And the Power songstress showed off her sensational post-baby body as she slipped into a skintight dress to celebrate Valentine’s Day with a slew of sizzling snaps on Monday.

Leigh-Anne looked phenomenal in the red, blue and yellow tie-dye dress that hugged her lithe frame. 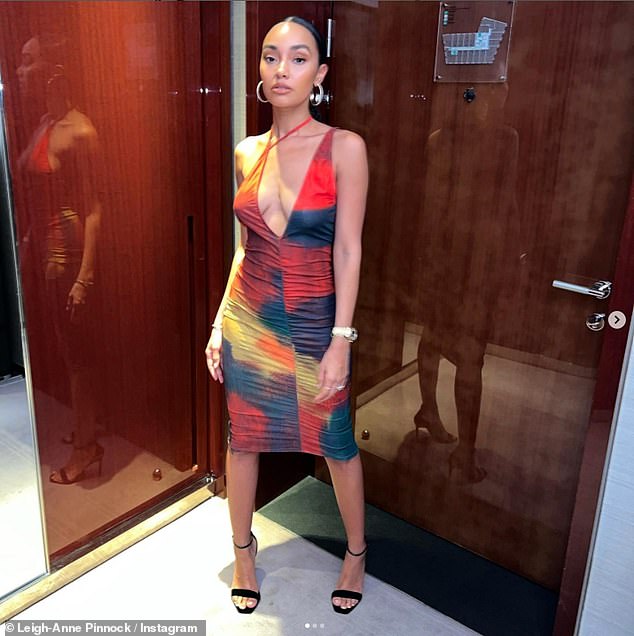 Flawless: It comes after she showed off her sensational post-baby body as she slipped into a skintight dress to celebrate Valentine’s Day with a slew of sizzling snaps on Monday

Her plunging neckline showcased her ample cleavage, while the midi length of her outfit allowed her to flaunt her toned legs.

She added a touch of glamour to her ensemble with a pair of silver hoop earrings and strappy black heels.

Her raven locks were swept back from her face in an elegant ponytail, and she completed her look with a soft palette of makeup.

In one shot the hitmaker cosied up to Andre, 30, who wrapped an arm sweetly around her waist as they posed for a mirror selfie together. 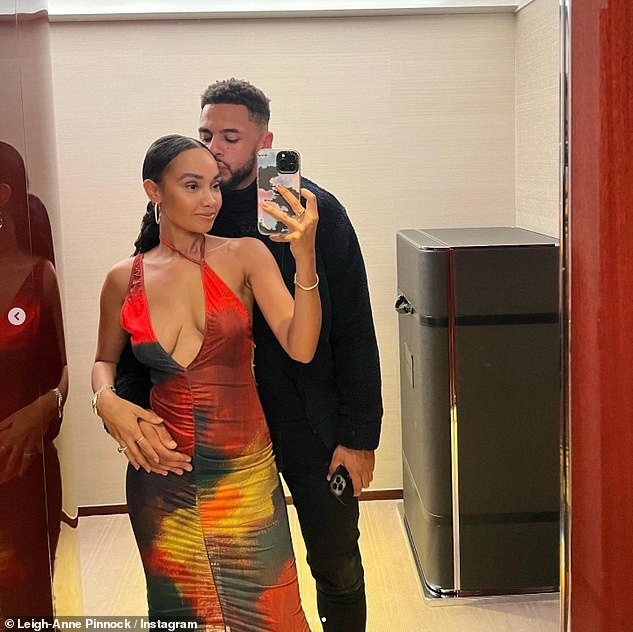 Stunning: The Little Mix singer, 30, looked phenomenal in the red, blue and yellow tie-dye dress that hugged her lithe frame

As her followers took to the comments to shower her in compliments, she captioned the string of stunning photos: ‘Really enjoyed this dress’.

It comes after Leigh-Anne, who is yet to release the names and gender of her babies, gave a rare insight into motherhood earlier this month.

She delighted fans with an adorable snap breastfeeding both her twins, five months, while relaxing at home.

The star looked every inch the doting mama in the candid black and white snap, no doubt taken by her fiancé Andre. 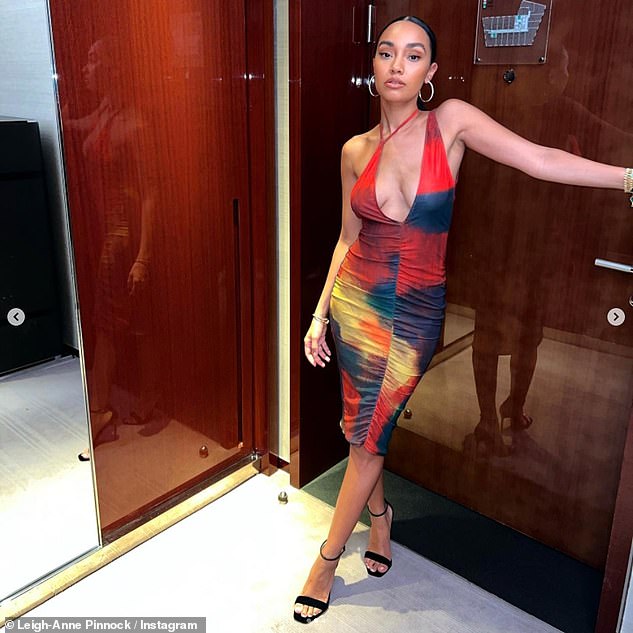 Looking good: Her plunging neckline showcased her ample cleavage, while the midi length of her outfit allowed her to flaunt her toned legs

Last month, the former X Factor contestant shared another glimpse at her brood in a Christmas Day Instagram post.

The singer, her footballer partner and their twins sported matching red-and-white striped pyjamas as they posed in front of a stunning Christmas tree.

Getting in on the action, their twins donned matching baby grows while Leigh-Anne revealed she struggled to capture the shot, having also attempted to get their dogs – also known as their ‘fur babies’ – in the image.

The outing comes after it was revealed that Leigh-Anne has signed a solo deal with Warner Records after her band Little Mix announced their hiatus last year. 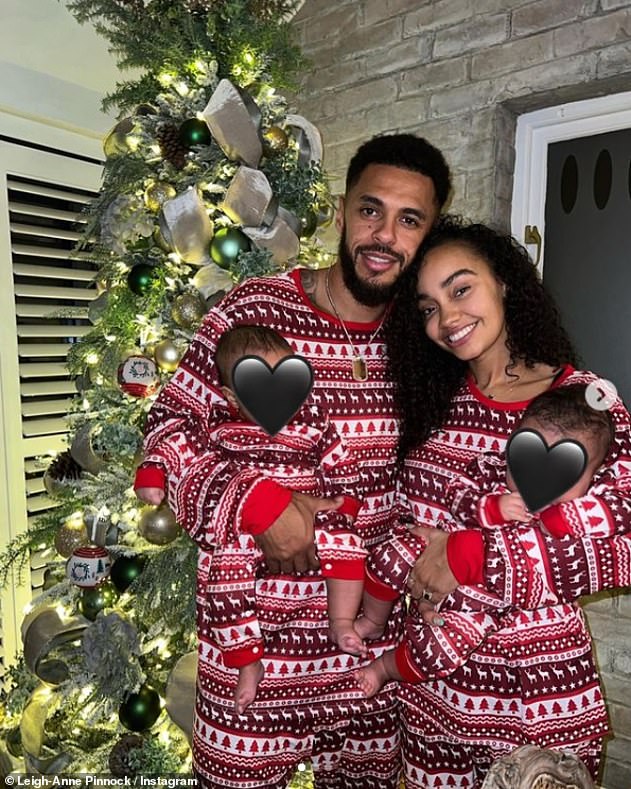 Cute: Last month Leigh-Anne and Andre put on a loved-up display as they cradled their baby twins in a Christmas Day Instagram post

The pop star – who shot to fame as a member of girl group Little Mix when they won The X Factor in 2011 – has joined the record label which is also home to the likes of Dua Lipa, Saweetie and Ed Sheeran.

A source added to The Sun: ‘A number of labels were keen to bag Leigh-Anne but Warner seemed the best fit.

‘She’s already been in the studio working on tracks for months.

‘Leigh-Anne unequivocally loves Little Mix and always will, but the truth is she’s been ready to branch out on her own for some time.’

The pop star, who appeared in film Boxing Day, is set to work with MNEK on her new record after teaming up with the musician while in Little Mix. 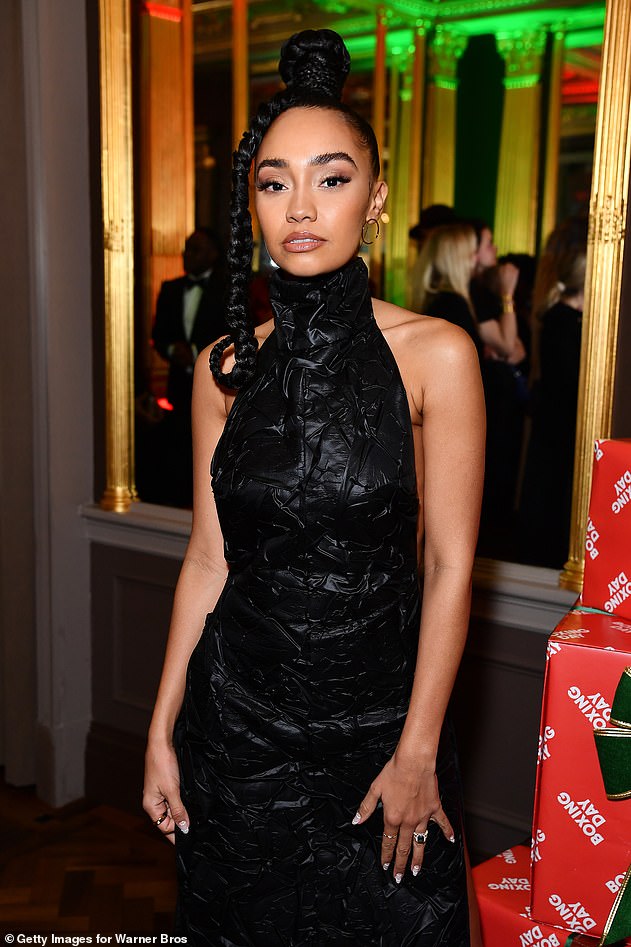 Branching out: The trip comes after it was revealed that Leigh-Anne has signed a solo deal with Warner Records after her band Little Mix announced their hiatus last year

The History of Dungeons & Dragons Isn’t What You Think

Watch Maxwell’s Seductive Performance of ‘Off’ on ‘Colbert’

Will there be another season of the Handmaid’s Tale?

Jeff Probst Reveals If He Has Ever Run a ‘Survivor’ Challenge

NCB: Criticism in Aryan Khan case is only making us stronger -Exclusive! – Times of India

Outcry as Faroe Islands slaughter 1,400 dolphins in a day