The singer and actress hit the stage for her first performance of the tour at the City Winery in Washington, DC on Wednesday night, July 20.

The show was the first of six shows she’s doing at City Winery locations in the U.S. this summer ahead of her much-anticipated return to Broadway to play the lead role of Fannie Brice in Funny Girl.

Tour underway: Lea Michele, 35, kicked off her mini tour An Evening With Lea Michele: Life In Music in Washington, DC on Wednesday, July 20; she pictured during NYC show in 2017

Michele, 35, belted out songs instrumental to her career during her first show in the Nation’s Capital.

The set list included music from Broadway shows Spring Awakening and Les Miserables, as well as from her stint on the hit musical series Glee, and her original studio albums.

She wowed the crowd with renditions of I Dreamed a Dream from Les Miserables, Mama Who Bore Me from Spring Awakening, her original song Cannonball, Somewhere Over The Rainbow and Sweet Child Of Mine from her new lullaby album Forever, and Glee covers including Poker Face, Glitter in the Air and Make You Feel My Love.

While introducing Make You Feel My Love, Michele told a touching story about the one episode of Glee she’s never watched that hits close to her heart.

That episode, titled The Quarterback, is the one that addresses the death of her former boyfriend and co-star Cory Monteith and his character Finn Hudson. 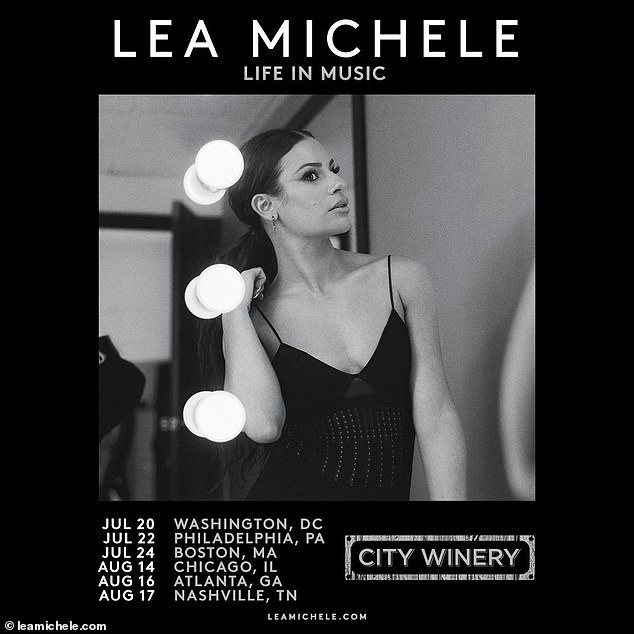 City Winery shows: The Glee alum is performing six summer shows at City Winery locations before she takes over the role of Fannie Brice in the Broadway show Funny Girl 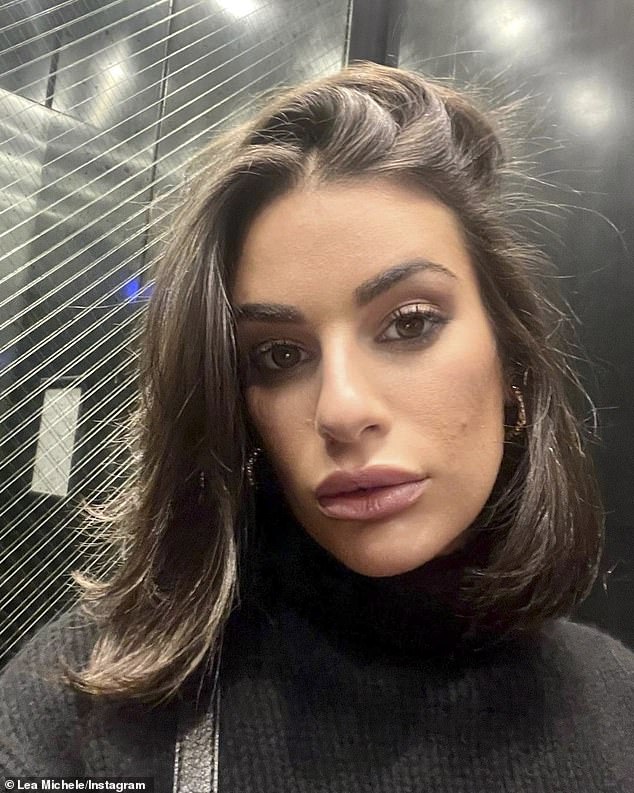 The tour: Michele is belting out songs instrumental to her career for this short tour

It turns out Glee creator Ryan Murphy asked Michele to pick the song that she’d sing to honor Finn.

‘How can I pick a song that says everything, you know? And so I just was like, ‘What can it be?’ I don’t even remember what I was listening to at the time. Like, nothing. I was just in such a hole,’ she shared with heartfelt emotion.

She continued, ‘And I’m grateful that he asked me. I really, really am. Because it needed to be something that felt real for me, but it was also so hard to just think of what song it could be. And then I just immediately was like, “Oh, that’s it.” I think we maybe listened to the song one time, because I know when Rachel says in the show that we would listen to it and that’s real. Because a lot of what I say in that episode, a lot of what I say to [Matthew Morrison]’s character in that classroom were exact words that I said to Ryan after everything.’

Michele confessed explained how shooting the episode was ‘really hard’.

‘I would film it and then run off and then I would come back. It was wild and hard, but we healed together and this song helped.’

She concluded, ‘I have never watched the episode. It’s the only one I’ve not seen. Because I think if I don’t watch it, it just kind of feels like Finn is still there. So this [song] is very special.’ 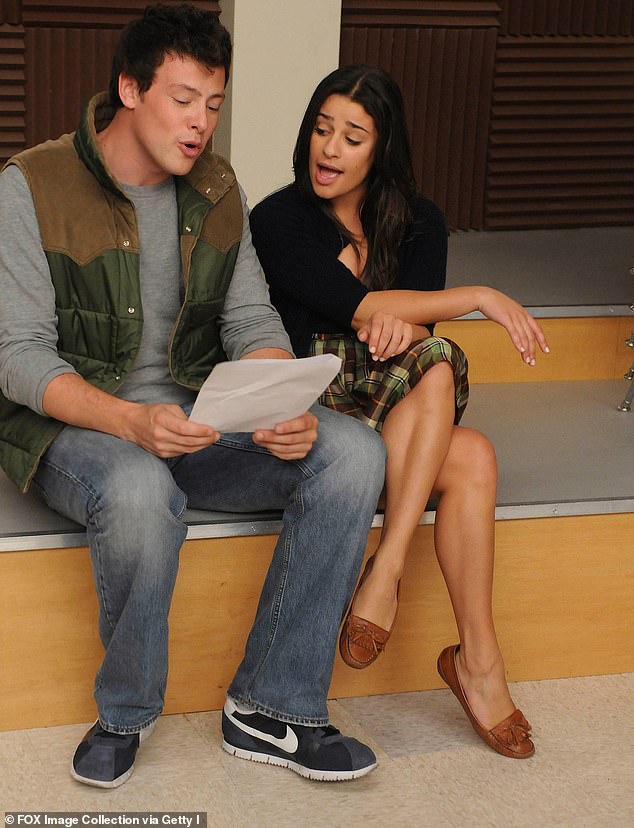 Emotional: While introducing Make You Feel My Love, Michele told a touching story about the one episode of Glee she’s never watched, title The Quarterback, that addresses the death of her former boyfriend and co-star Cory Monteith and his character Finn Hudson 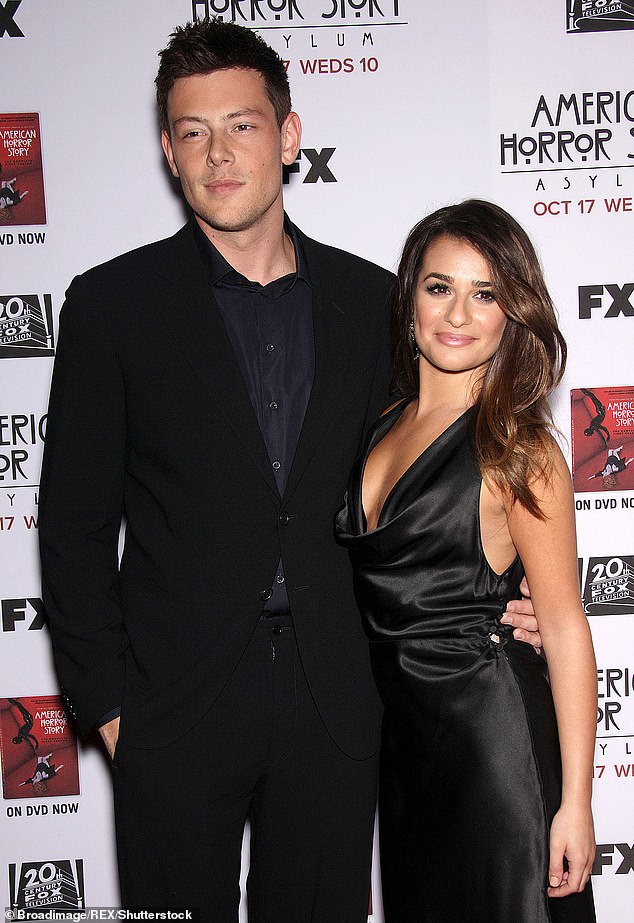 Old flame: Monteith and Michele been an item before his tragic death in July 2013

The Bronx, New York native fittingly closed the show with her version of My Man from the movie Funny Girl.

The song, which hasn’t been featured in the Broadway show, won’t be apart of the setlist when she takes over the Fanny Brice role on Broadway in September.

‘Because I won’t get to do it every night on Broadway, I want to sing it for you all tonight. Here’s a little bit of Fanny Brice and I will see you on September 6,’ she told the crowd at the City Winery on Wednesday.

The next stop of the tour takes Michele to the City Winery in Philadelphia on Friday, July 22.

Beanie Feldstein’s final performance as Fanny Brice in Funny Girl is on July 31.

Julie Benko, who had served as the understudy, will take over the role from August 1 through September 4, and then Lea Michele takes over two days later on September 6.

The semi-biographical plot is based on the life and career of Broadway star, film actress, and comedian Fanny Brice, featuring her stormy relationship with entrepreneur and gambler Nick Arnstein.

Funny Girl opened at the August Wilson Theatre on Broadway on April 24 and currently has an open-ended run. 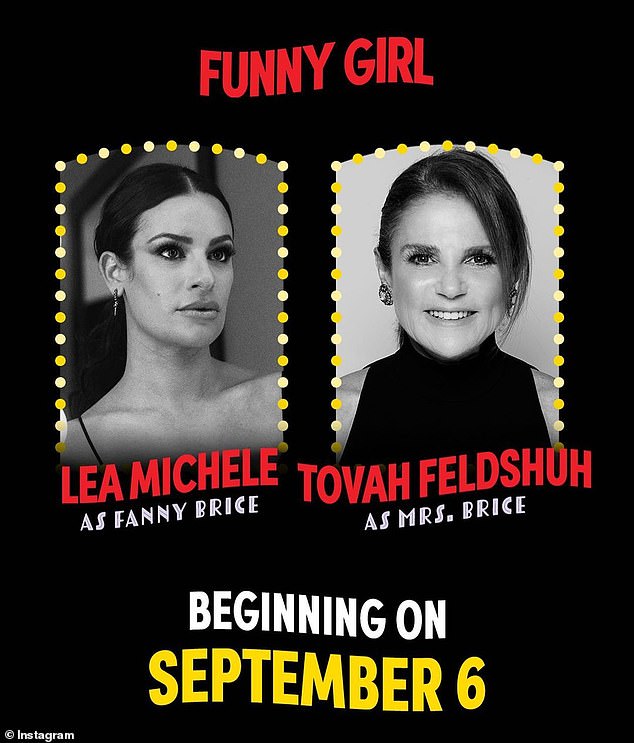 Broadway bound: Michele takes over the role of Fanny Brice in Funny Girl on Broadway September 6

Who got voted off Survivor this week?

Was William Zabka a Martial Artist Before Being Cast as Johnny?

Is Barcelona vs Bayern Munich on TV tonight?