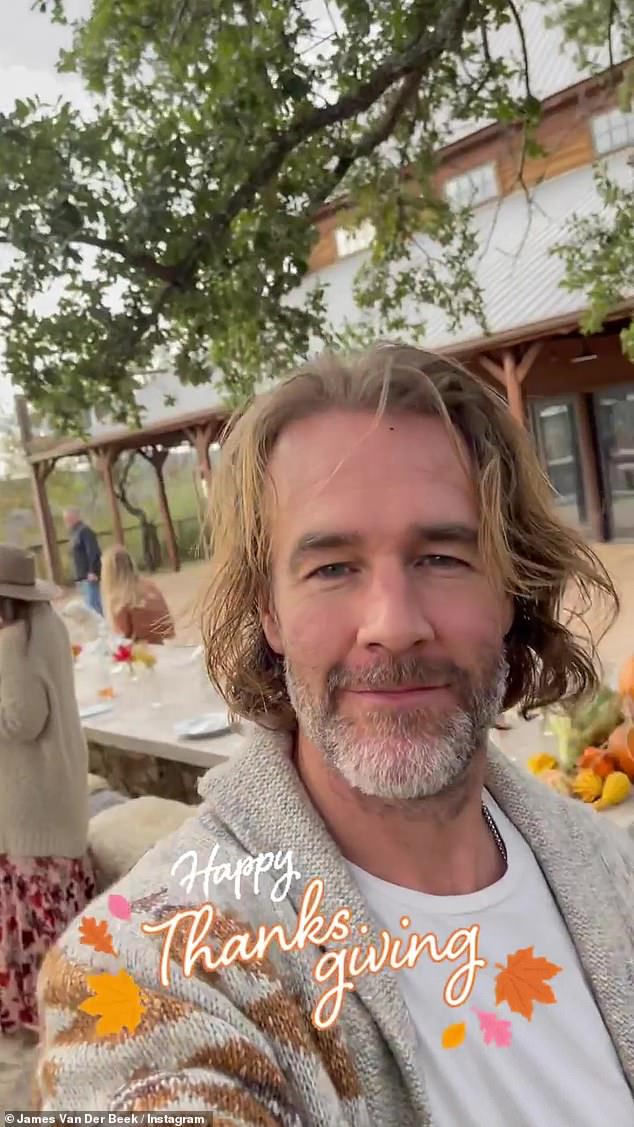 Who knew they were friends?

Dawson’s Creek star James Van Der Beek celebrated Thanksgiving with family and friends, and shared an array of videos and photos of their festive dinner on Instagram.

And it turns out Will Smith‘s co-star on the Fresh Prince Of Bel Air, Alfonso Ribeiro, was among the guests on hand to enjoy all the holiday food and lively conversation.

The holiday festivities appeared to have been held at Van Der Beek spacious ranch in Austin, Texas.

The family had a big dinner table set up outside their home, where everyone could sit together and chat.

As the proud father of now six, following the birth of son Jeremiah this month, walked around the area shooting video the Ribeiro could be seen flashing a big beaming smile into the camera.

Like Van Der Beek, Ribeiro is also a proud father; only he has four children, son Anders, six, and Alfonso Jr., one, and daughter Ava, two, with his second wife, Angela Unkrich, as well as a daughter Sienna, 18, he shares with his first wife, Robin Stapler. 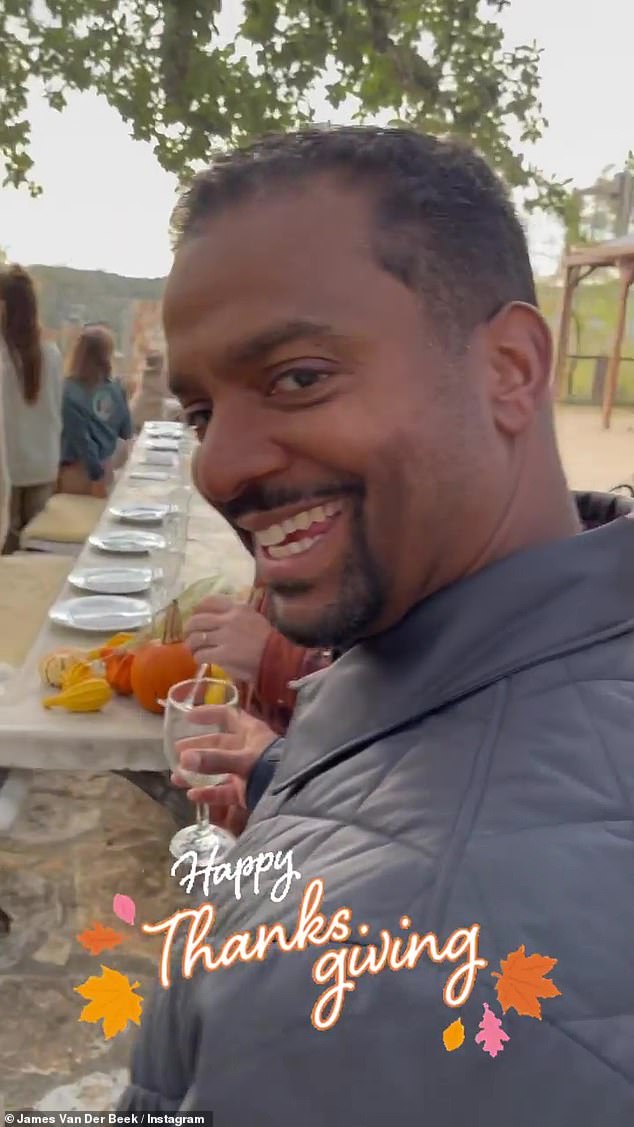 Say cheese: Ribeiro, 50, flashed his familiar smile when van Der Beek made the rounds with his camera during his Thanksgiving feast 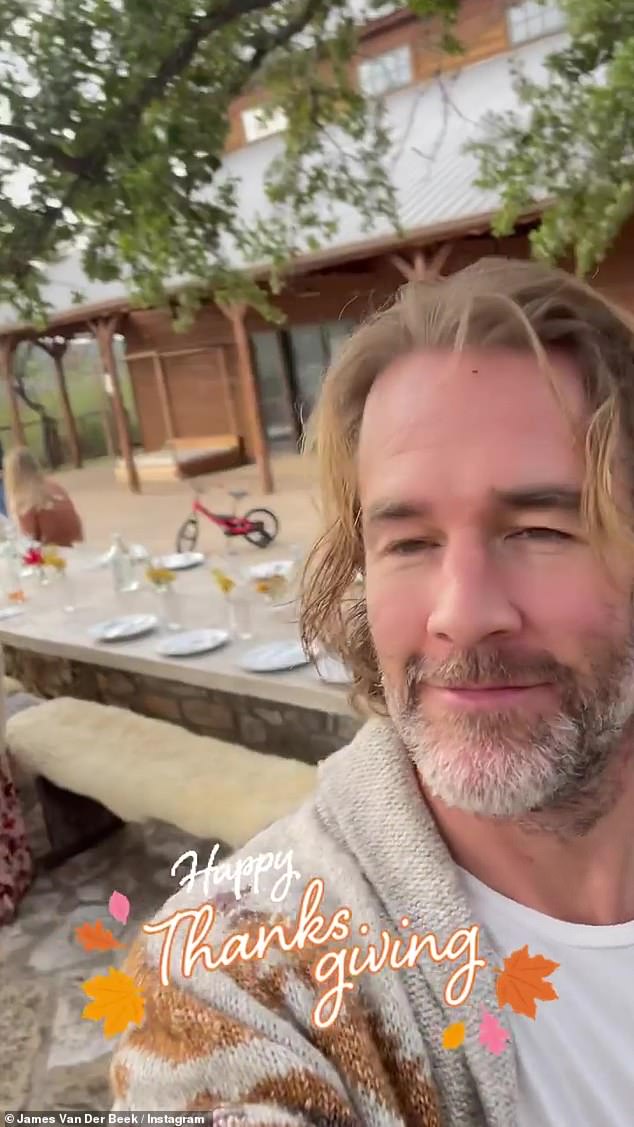 Holiday: The Dawson’s Creek alum was the picture of  contentment as she filmed his guests relaxing in the backyard of his Austin, Texas ranch 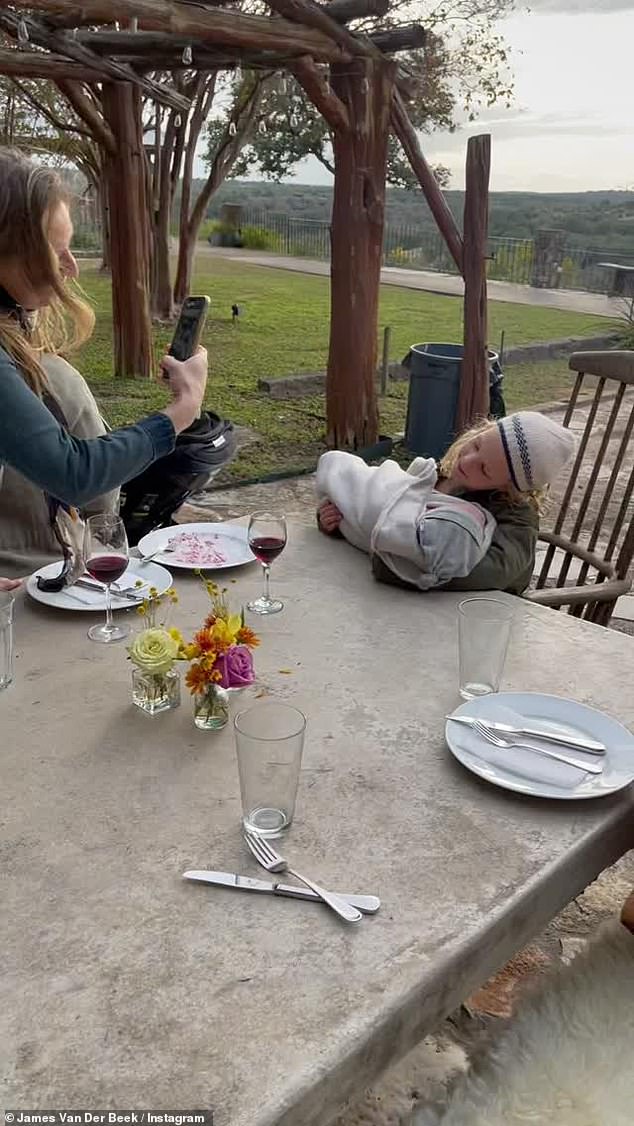 New dad, again: The proud father also got s shot of newborn Jeremiah, who was being cradled by one of his kids

‘What’s up bud?’ the Dawson’s Creek alum could be heard saying to the actor from behind the camera.

Being a proud new father, once again, Van Der Beek moved the camera from Ribeiro towards his newborn son, Jeremiah, who was being lovingly cradled by one of his older siblings.

The gorgeous outdoor setup showed a long dinner table full of place-settings and a fire pit.

At one pit the camera fixed on Van Der Beek’s five-year-old daughter, Emilia, eating a big turkey drumstick, which from the sounds things, she got with a little clever thievery. 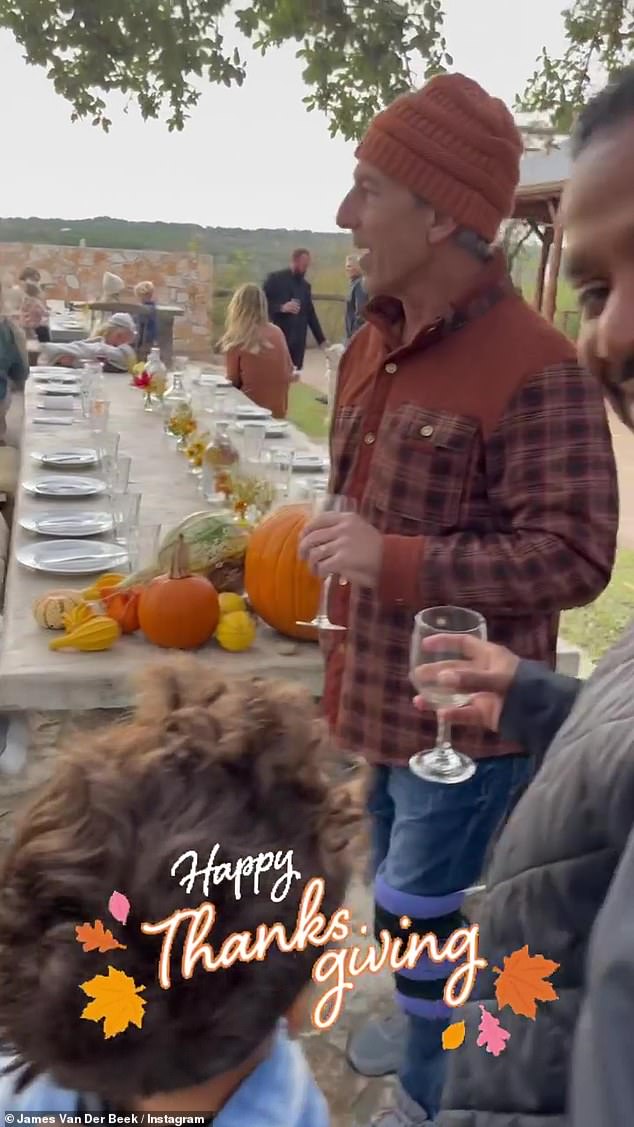 Festive feast: The guests could be seen siping on drinks as Van Der Beek moved around the yard shooting video for his Instagram page 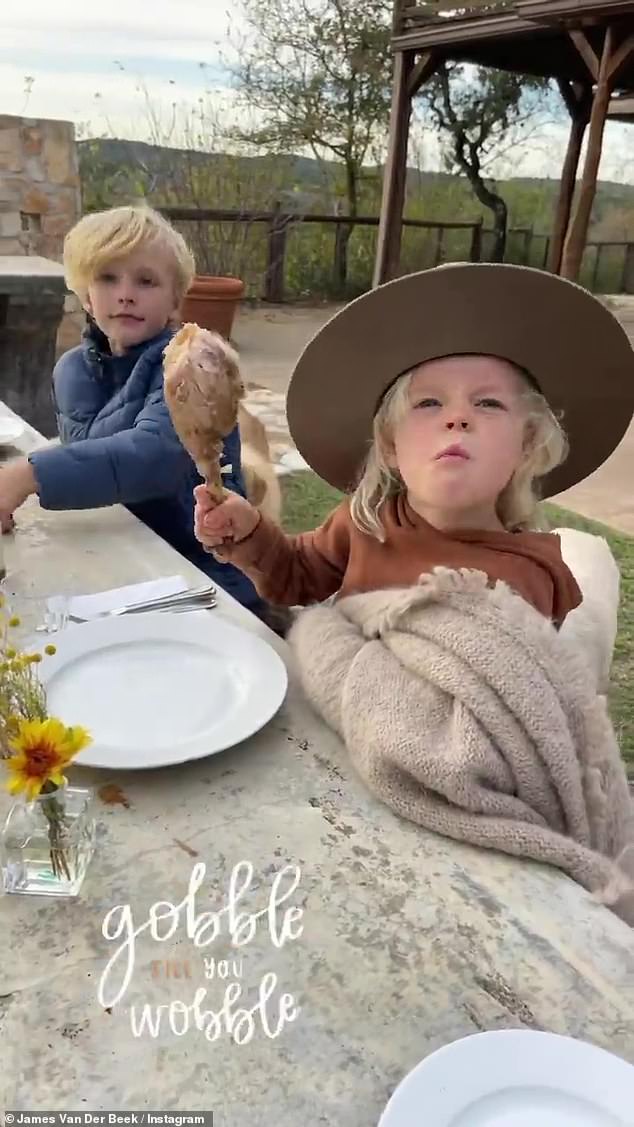 Cute: The actor’s daughter, Emilia, was adorable in a big hat while chewing on a drum stick 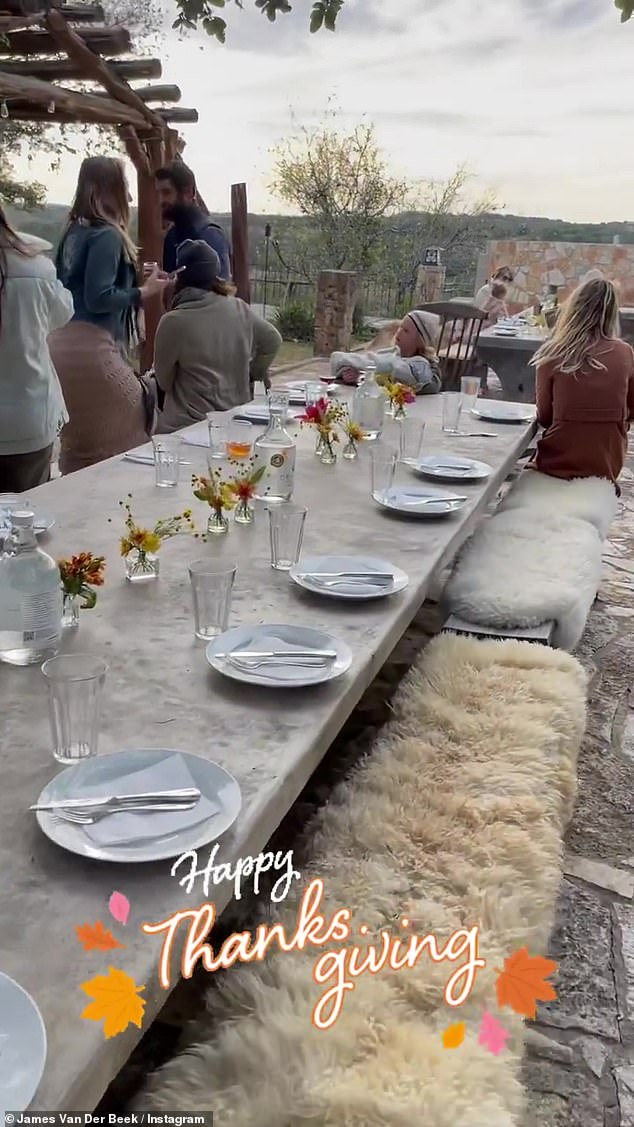 One with nature: For the dinner, there were several long tables set up outside in the yard 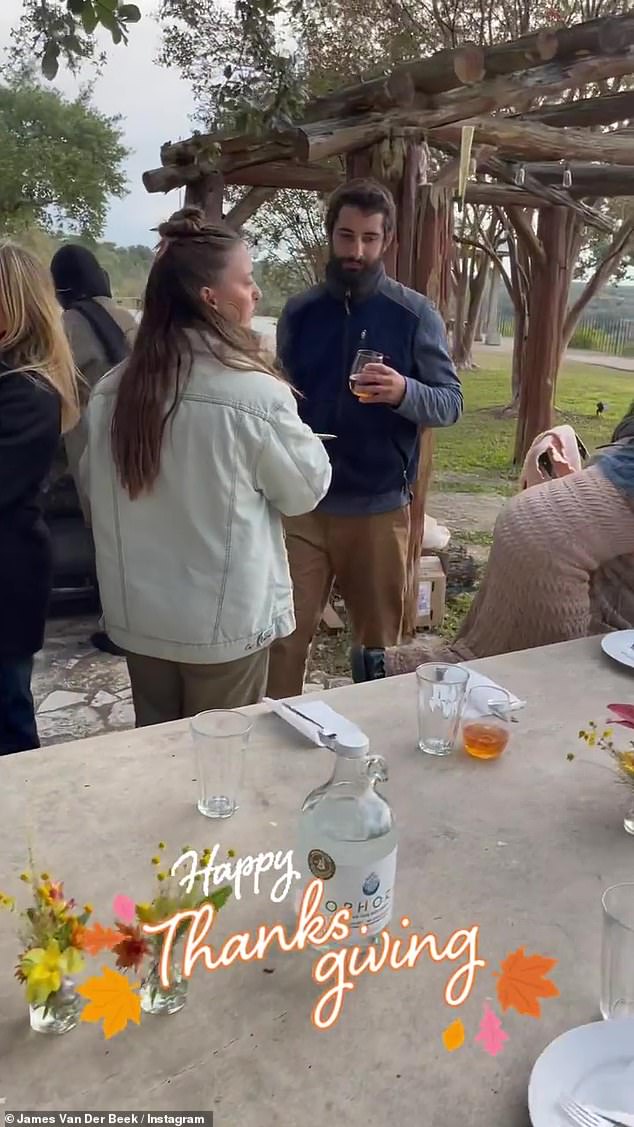 Social: Van Der Beek chatted with people as he made the rounds around the gathering

‘Emilia, you stole my turkey leg,’ one man could be heard telling the adorable blonde little girl, as she held up the prized drum stick.

‘You know what: when you look like that you get to [eat someone’s else food],’ the man added, in a reference to the cute look on her face. 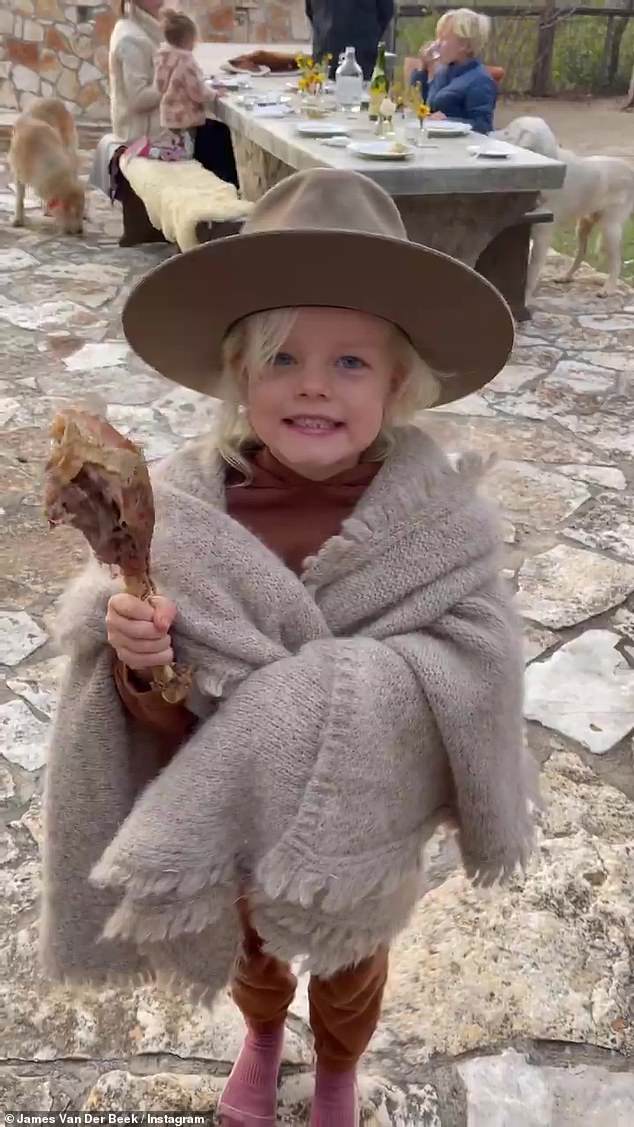 Hilarious: Emilia was accused of taking one man’s drum stick, to the amusement of that guest 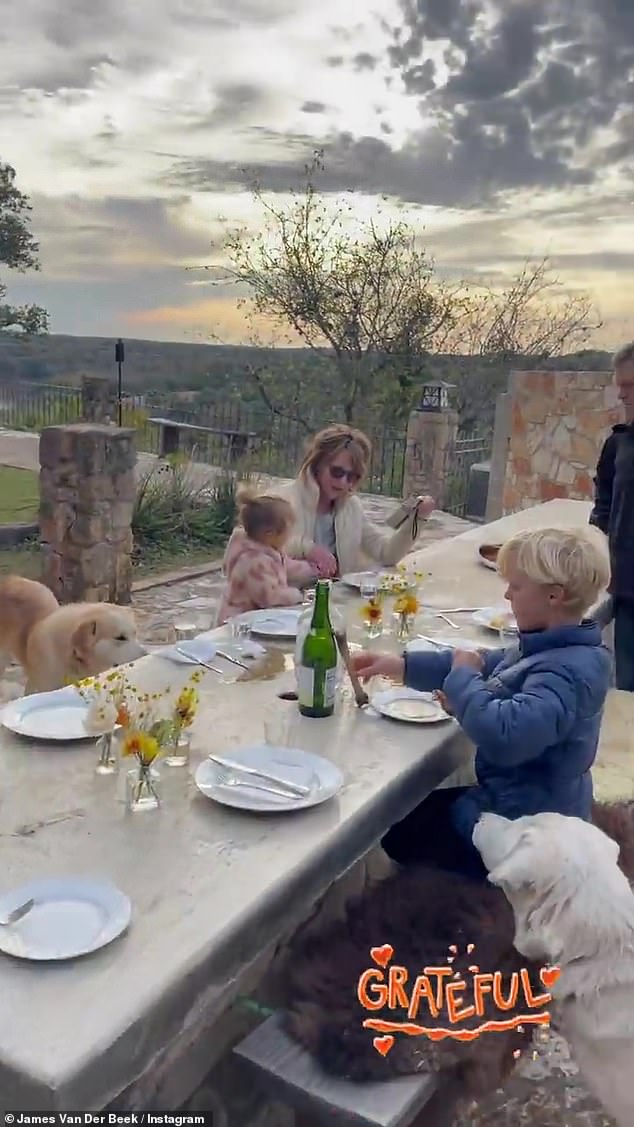 Focused: The dogs kept a keen eye on Van Der Beek’s kids, just in case they fed them 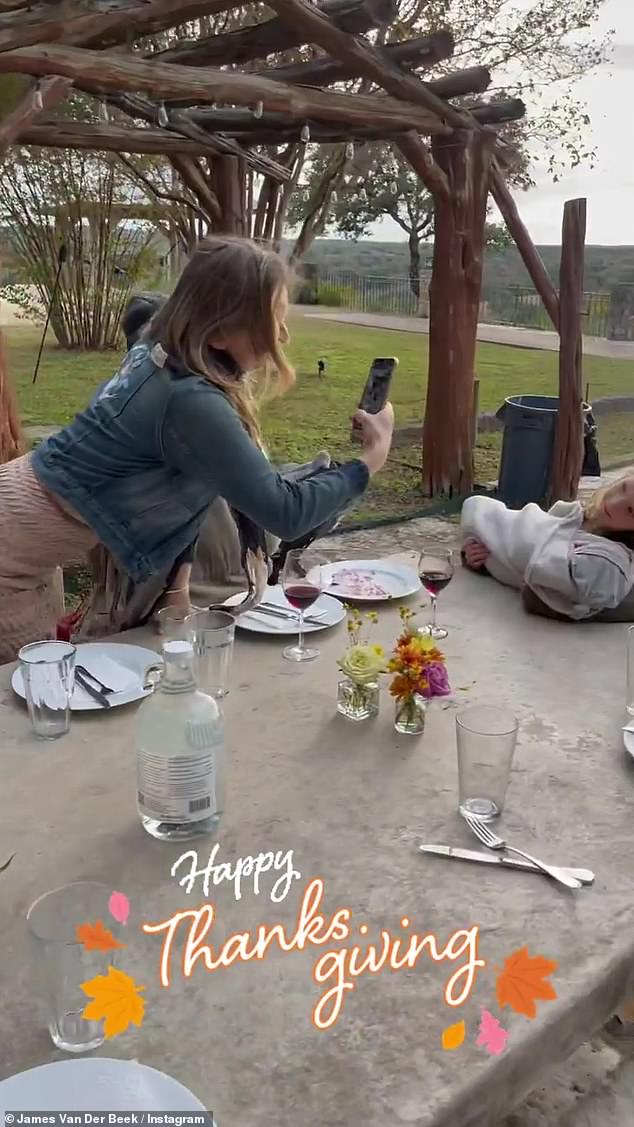 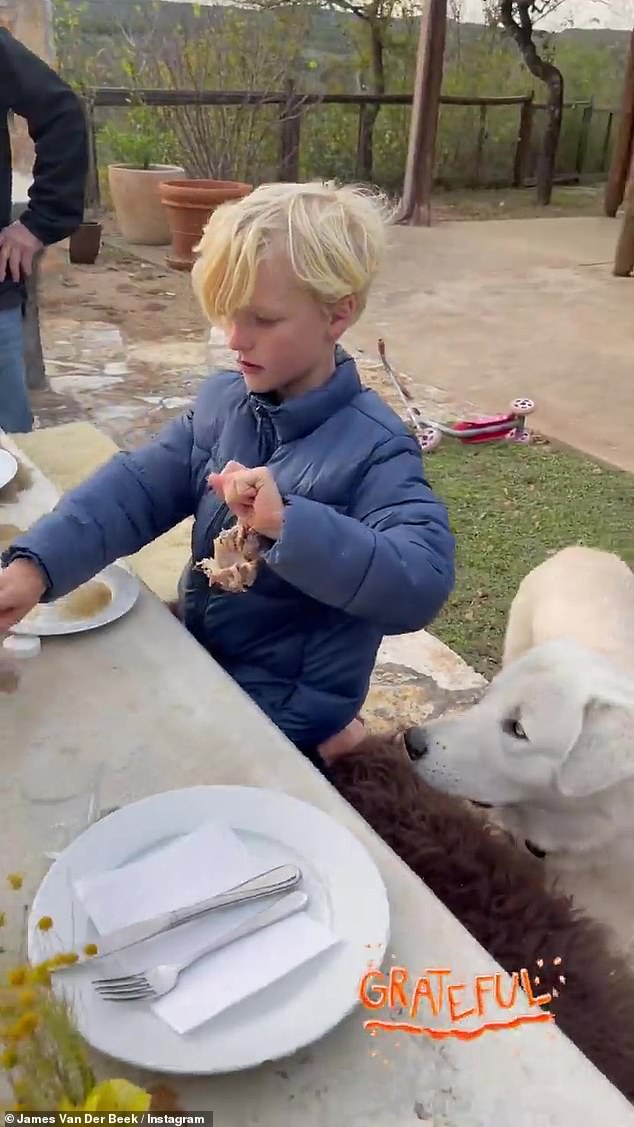 Van Der Beek shared how he was feeling ‘grateful’ on Thanksgiving, just days after going public with the birth his their sixth child with wife Kimberly five weeks earlier 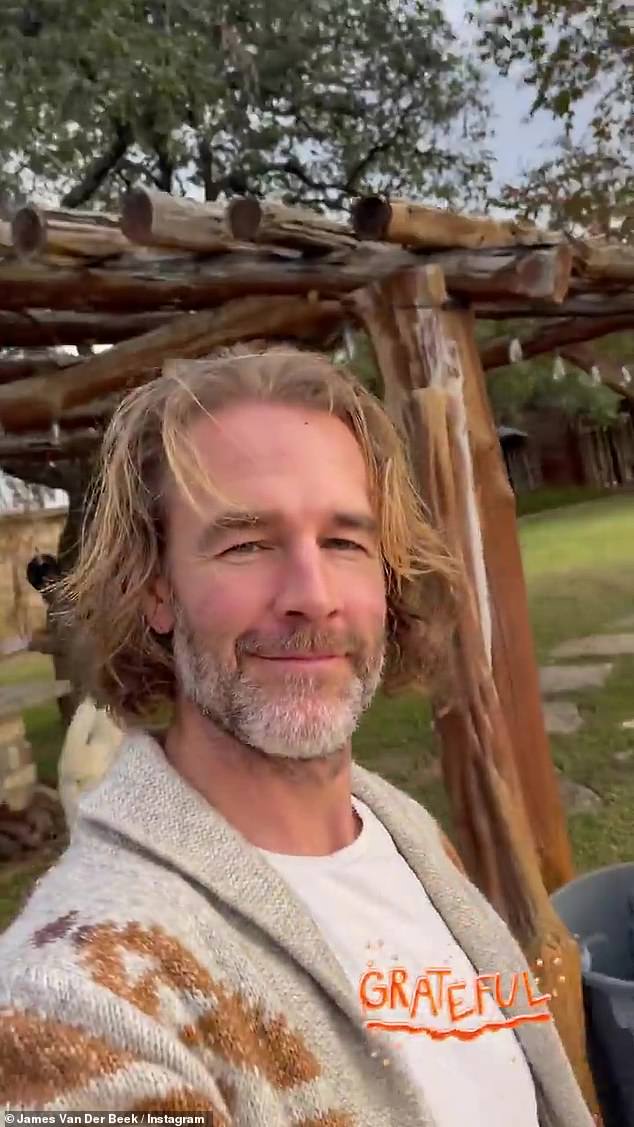 ‘Grateful’ for family: Van Der Beek is feeling ‘grateful’ after the birth of his sixth child five weeks earlier 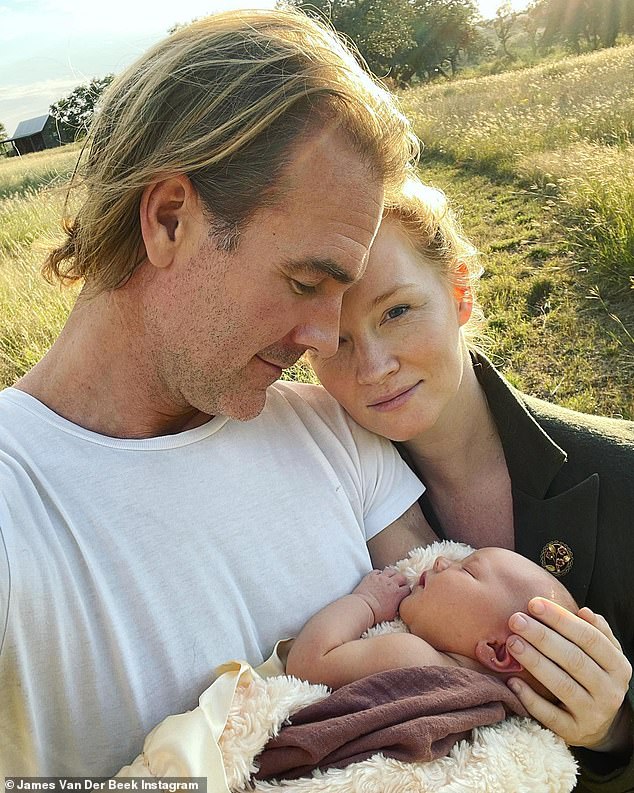 Let their be life: The Van Der Beeks suffered through multiple miscarriages in recent years

Virat Kohli: Having Anushka and Vamika around is enough birthday celebration for me – Times of India

Ranveer Singh dons a funky attire for his dubbing session in the city; shares a selfie while returning home! – Times of India

Ankita Konwar Poses in her ‘Favourite Yoga Pose,’ Lists Out its Benefits

DR ELLIE CANNON: Why am I so cold, even when I’m inside with the heat on?