This Fan-Favorite Character Would Have Served Under Captain Archer in ‘Star Trek: Enterprise’ Season 5 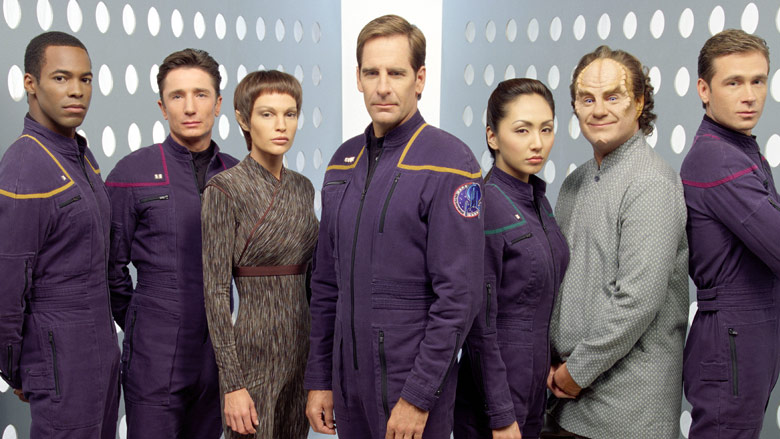 The cast of “Star Trek: Enterprise”

“Star Trek: Enterprise” was canceled before its fifth season headed into production. However, it was canceled so abruptly that several major storylines for the upcoming season were already in the works. In the years since the show was canceled, the writers and showrunners have revealed that the fifth season would have delved into T’Pol’s secret backstory and tackled the origin story of the Borg Queen.

They’ve also revealed that one fan-favorite recurring character would have become a member of the Enterprise NX-01’s crew.

Shran on the Enterprise NX-01

Manny Coto was one of “Enterprise’s” showrunners for the last season. He also wrote several episodes of the season. His work on season four made him part of the core creative team that began planning storylines for season five.

In a chat-based Q&A session with fans in February 2005, Coto talked about some of the plans they had for season five. This Q&A session occurred after the announcement that “Enterprise” had been canceled, but before the series finale aired. TrekToday reported on the Q&A session shortly after it happened. According to that report, Coto revealed that one of the big ideas they’d discussed was making the Andorian captain Shran a member of the Enterprise NX-01’s crew.

A few years later, Coto and co-showrunner Brannon Braga confirmed this during a panel at the official Star Trek convention in Las Vegas. TrekMovie.com reported that the co-showrunners said that their main goal was to get Jeffrey Combs, the actor who played Shran, on the show full-time. They revealed that they’d discussed doing this by making Shran an “advisor” on the Enterprise in season five.

How Would Shran Fit Into the Enterprise Crew?

Since this revelation, fans have spent years lamenting the fact that they didn’t get to see more of Shran. These conversations have led to many theories about how Shran would have fit into the crew of the Enterprise NX-01.

Some fans wondered why Shran would be assigned to the Enterprise when he was the captain of his own ship within the Adorian military structure. They also pointed out that he likely would insist on being a high-ranking officer within the Enterprise’s command structure, given his previous experience. Fans suggested that these circumstances would make it difficult to insert Shran into the Enterprise crew as it existed in the previous seasons.

However, other fans came up with some pretty interesting theories about how Shran could be incorporated into the crew.

Others suggested that T’Pol could step aside as First Officer of the NX-01, which would allow Shran to take the position. This would certainly fit with Shran’s expectations of being high-up in the command structure. It would also fit thematically since the early Enterprise crews always had an alien First Officer whose presence served to highlight the similarities and differences between aliens and humans.

Many fans posited that Shran could be appointed as a diplomatic liaison abord the Enterprise, representing Andorian interests on deep space missions. The end of “Enterprise’s” fourth season depicted the creation of the Federation. Since the Andorians were among the founding members of the Federation, it makes sense that an Andorian would be assigned to the humans’ flagship as a representative and advisor.

No matter how the writers managed to get Shran aboard the NX-01, one thing is clear — this was a huge missed opportunity for the franchise and fans alike.

Malaika Arora’s elegant sarees that deserve all your attention

Portrait of Spot the Robot Descending a Staircase

Abdulrazak Gurnah wins the Nobel prize in literature for 2021

Modern medicine still has much to learn about women’s bodies

Who is Toby from Love Island and which football team does he play for?

Interview: Mita Kapur, Literary Director, JCB Prize for Literature – “I want to make the JCB Prize a true representation of what India reads”

Daily number of Americans getting their first dose has fallen under 200,000