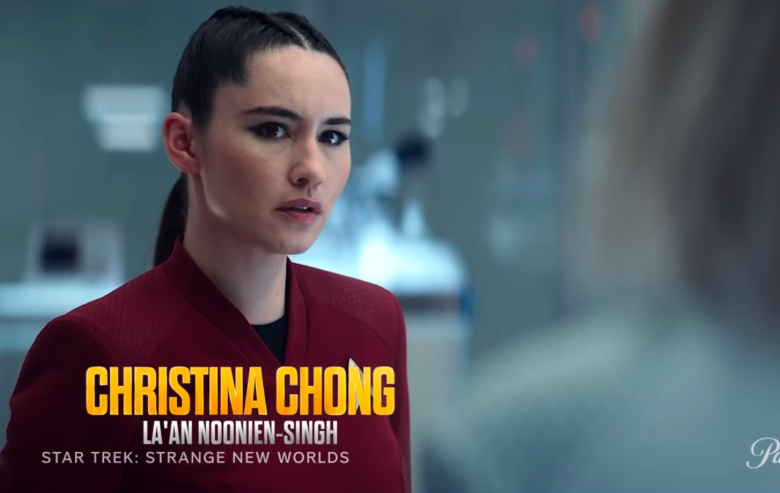 During the Star Trek Day 2021 celebration in early September, the cast of “Star Trek: Strange New Worlds” revealed several characters from the upcoming series. Fans were delighted to discover that the show will be bringing back more “Star Trek: The Original Series” characters, including Lieutenant Uhura, Nurse Chapel, and Dr. M’Benga.

The cast also revealed that the show would introduce some brand new characters, two humans and one Aenar, a subspecies of Andorian. One of the new human characters, La’an Noonien-Singh, has a last name that’s very familiar to fans of “The Original Series.”

The revelation has many fans wondering whether “Strange New Worlds” is introducing a descendant of one of “Star Trek’s” most infamous villains.

A Brief History of Khan & The Augments

Khan Noonien-Singh was first introduced in the TOS episode “Space Seed.” Khan was a genetically enhanced human known as an Augment. He was a major figure in the Eugenics Wars of the late 20th century. During this time period, the Augments, who were extremely aggressive and believed that they were superior to non-augmented humans, seized power all over the world.

In the mid-1990s, Khan commandeered a spaceship so he and several other Augments could escape the Eugenics Wars on Earth. He placed the other Augments, and then himself, into stasis so they could be revived in the future and then sent the ship into space.

“Star Trek: Enterprise” revealed what happened following the Eugenics Wars. The Augments that participated in the Eugenics Wars were tried as war criminals. The government also had to decide what to do with the thousands of Augment embryos that had been created by scientific research into genetic engineering. They decided to put the embryos into cold storage.

Some of these embryos were stolen by a geneticist named Arik Soong in the 2130s. He used the embryos to create new Augments that he considered to be his children. Soong believed that if he raised the Augments with kindness and compassion, they wouldn’t display the aggressiveness of their ancestors.

Unfortunately, he was wrong. His Augment children rebelled and began a conflict with Starfleet. The Enterprise NX-01 was tasked with destroying the Augments and the rest of the existing embryos.

However, not all of the embryos were destroyed. The Klingons got their hands on some of them and attempted to create genetically enhanced Klingons. So, it’s very possible that the embryos were used by others as well.

Obviously, La’an shares a last name with the villain, but does that mean they’re related? Unfortunately, fans won’t know for sure until the show premieres.

However, the team behind “Strange New Worlds” has been meticulous about its references to the existing “Star Trek” canon. So, it would be weird for the writers to use such an iconic name if it had no connection to the infamous villain.

If she is related to Khan, there are a few ways to explain the connection. Though the Trek canon never mentioned Khan having a significant other in the 90s, it’s very possible that he had a paramour. If so, La’an could be a direct descendant of Khan’s.

It’s also possible that she was created from one of the Augment embryos. Of course, this wouldn’t necessarily explain the surname considering surnames are usually passed down to direct descendants. One theory that could work is that La’an was created by a loyalist group of Augments who took on the Noonien-Singh name to show their allegiance to Khan.

La’ana’s presence on the Enterprise predates the discovery of Khan’s stasis ship. So, there’s no way that she was a secret descendant of Khan’s on that ship.

This is all pure speculation, of course. It’s possible that the name is a red herring. Either way, it’s fun to theorize.

‘A Betrayal of Democracy’: What We Learned From the Facebook Whistleblower Interview

Dara McAnulty: ‘Being out in nature always helps’

Isha Koppikar: Rianna and I love twinning, life is ‘two-riffic’ with her around – Times of India

Italy’s ITA takes to skies in ashes of Alitalia