The Importance of Bonsai in ‘The Karate Kid’ 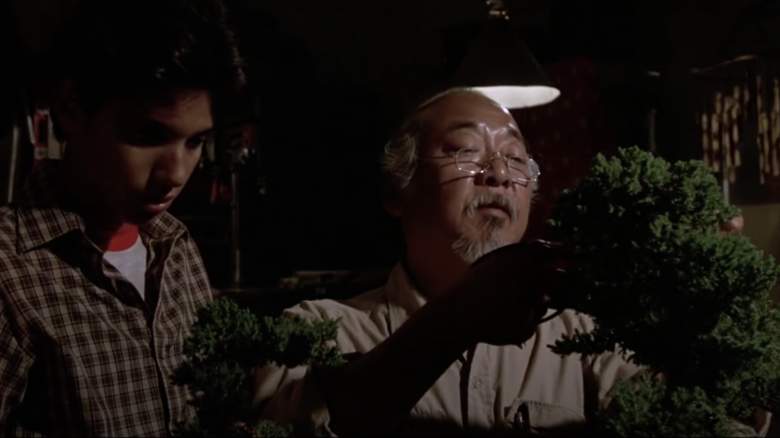 The bonsai tree has become an iconic symbol of the “Karate Kid” franchise, from when it first appeared in 1984 until today, as it continues to play an important role in Netflix’s “Cobra Kai” spinoff series. When they first appeared in “The Karate Kid” as an object of fascination for sensei Mr. Miyagi and, soon, his pupil Daniel LaRusso, fans might not have predicted the significance of the plant in the story to come.

The bonsai tree perhaps made its most impactful appearance as a logo on Daniel’s gi during the tournament at the end of the original film. However, what most fans don’t know is that it wasn’t the costume designer who designed the gi that way. Here’s everything you need to know about “The Karate Kid’s” important bonsai tree.

The Bonsai Tree Is Not Actually A Tree

As explained by Grunge, the bonsai tree is not actually a tree, but rather a traditionally-practiced art form in Japan meant to create entire natural sceneries in small pots, almost as a miniature version of real life sceneries. Although the most common bonsai are maple, elm, juniper, and ficus, bonsai can actually be formed from virtually any tree or shrub, according to Mythical Bonsai.

In “The Karate Kid,” the bonsai tree begins to play a significant role in the story when Daniel walks in on Mr. Miyagi delicately trimming one, showing it the love and care it deserves. After Daniel learns about the art of bonsai, he soon becomes engrossed with it himself, and learns how to care for bonsai of his own. This has led fans to speculate on the symbolism of the bonsai tree in the franchise, with some suggesting that it reflects the inner peace within us all, and the importance of channeling it in order to practice karate.

In the TV series “Cobra Kai,” adult Daniel’s appreciation for bonsai is shown through their part in the car dealership which he owns, whereby customers get a free bonsai for every car purchased. Later in the series, Daniel teaches protégé Robby Keene the art of trimming bonsai, similar to how Mr. Miyagi taught him in the original films.

It Was an Actor Who Designed the Bonsai Logo

Perhaps the most noteworthy inclusion in the franchise of bonsai as a symbol, however, is the appearance of the bonsai on Daniel’s gi, beginning in “The Karate Kid,” opposite the cobra that appears on Cobra Kai’s gis.

What many fans might not know, however, is that it was actor Pat Morita – who played Mr. Miyagi – who designed the bonsai logo, according to IMDB. Although the California-born actor had little karate training before filming “The Karate Kid,” both his parents were immigrants from Japan, and he grew up with a rich understanding of Japanese culture, according to Biography.com.

Alongside the snake of John Kreese’s Cobra Kai, and the eagle of the newly-formed Eagle Fang, introduced in season 3 episode 7 of the series, the bonsai tree has remained as a logo of Daniel LaRusso’s Miyagi Do karate studio in “Cobra Kai.” It is also, notably, the only logo which is neither an animal, nor has a direct connection to the name of the dojo, perhaps as commentary on Miyagi’s well-known belief in the importance of karate as a defense, and not as a weapon. The importance the dojo logos – or the species they derive from – in season 4 of “Cobra Kai” is yet to be seen. Season 4 will be released on Netflix on December 31, 2021.

Fox Nation Host Decides Hanukkah is the Right Time to Compare Dr. Fauci to a Nazi

Lauren Groff imagines the life of a proto-feminist nun

Jenn Todryk Gives an Update on Her Youngest Child

A new book chronicles the blaze that destroyed Paradise, California

‘Eco-anxious’ young people are filing climate lawsuits against their countries

After 50 years, Wole Soyinka has returned to fiction