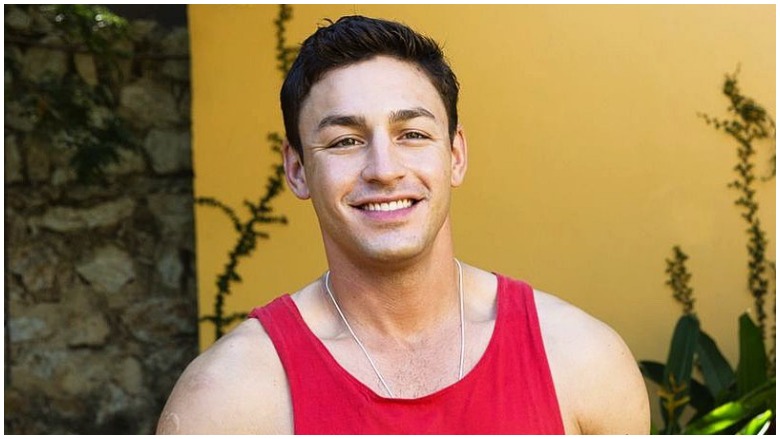 Six-time “The Challenge” star and “Vendettas” finalist Tony Raines has just shared on social media the horrifying details of his home’s collapse during Hurricane Ida which sent his fiancee Alyssa Giacone to the hospital. On September 9, he posted on Instagram some photos of the destruction and wrote how grateful he was to still have his family.

Tony, who lives in Louisiana with Alyssa and their daughter Isla Rose, also shares 5-year-old daughter Harper London with his ex, Madison Channing Wells. “Hurricane Ida might’ve destroyed my home but I still have my family,” Tony wrote on Instagram. “The night of the storm a tree came crashing down through our living room. Alyssa and my 4 year old daughter, Isla, were sitting on the couch next to each other and I was standing in the middle of the room.” He wrote:

When the roof collapsed, I fell to the floor and immediately thought the worst. Adrenaline kicked in and I immediately headed to the couch where my family was. I could hear my daughter crying and cleared her from the debris. I brought her to the middle hallway bathroom and went back for Alyssa.

At first she was not responsive and my heart sunk but I could hear her breathing. After a few moments of moving the debris off of her to pull her out she regained consciousness.

Tony explained that Alyssa had suffered a blow to the head that knocked her out and her hand was “severely wounded.” He said, “We were able to make it to the hall bathroom with my daughter, who was thankfully unscathed, and attempted to call 911 for help with Alyssa’s injuries but it was too late. The storm made it impossible for emergency services to get to us.”

He said the family waited for five hours before they decided to leave their home to get to the hospital themselves but despite trying every route to get to the hospital, downed trees and power lines blocked every option. The former reality star said they eventually found someone with a chain saw who was able to help clear a path for them although it took nearly four hours to get through.

“Alyssa received stitches in her forehead and the doctors scheduled surgery on her hand,” Tony wrote. “If all goes well, she will make a full recovery in 3 months.” He said:

I struggled with sharing this but I wanted everyone to know that miracles do happen. If that tree or part of the roof falls a foot in any other direction this could be a different story.

I’m thankful I get to hug my family and as traumatic as this experience was, we are all blessed to still be here!

Alyssa’s friend created a GoFundMe page with the family’s permission to help cover the family’s “meals, hotel stays, and loss of income” and childcare so they can focus on healing from the traumatic experience. According to the GoFundMe, Alyssa works as a hairdresser and “her hands being so severely injured will [affect] her work.”

Wes wrote on Tony’s Instagram post, “Jesus Christ man, I’m so happy your family is okay and incredibly sorry you had to go through this. My thoughts are with you during the road to recovery.” Kyle Christie commented, “Praying for you all, I’m glad your family are okay and you are all getting through this difficult time.”

Jenna Compono wrote, “She is one tough mama. Sending positive vibes for Alyssa’s recovery, I’m so happy you all are okay! Sending love and prayers through this difficult time. if you need anything we are a phone call away.”

Kim Kardashian West will host SNL for the first time

Ahead of Aryan Khan’s bail hearing, fans show their support for Shah Rukh Khan’s son outside the court – Times of India

Wired headphones are now a retro ‘trend’ and we feel old