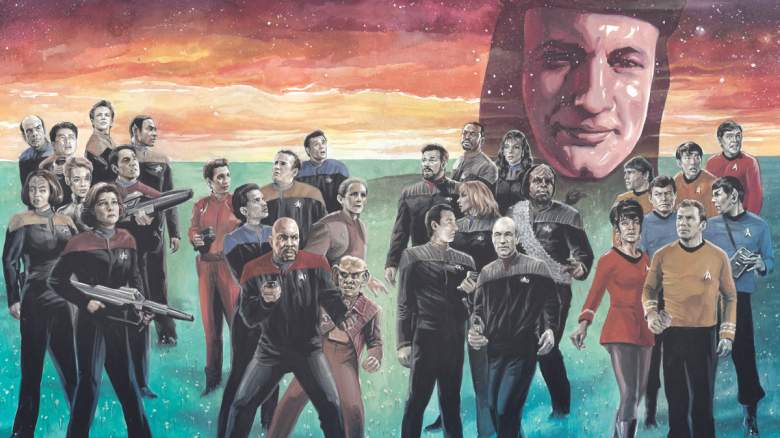 The “Star Trek” movie franchise proved to be successful right from the start. As William Shatner says, without “Star Wars,” there would be no “Star Trek.” As an earlier Heavy article pointed out, Trek was first and inspired many elements of Wars. But Captain Kirk is correct in his meaning, that after “Star Wars” was such a financial success, Paramount made sure their space franchise would be in theaters as quickly as possible.

After the measured success of “Star Trek: The Motion Picture,” Paramount used a different approach for the sequels — meaning that their budgets were much smaller (as detailed here by The Numbers). “The Wrath of Khan,” as Looper writer Dylan Roth says, “made an immediate cultural impact, becoming a legitimate mainstream hit and winning back eight times its budget.”

The following films (except for the poorly reviewed “Star Trek V: The Final Frontier”) all did well enough at the box office to spawn another continuation of the “Star Trek: The Original Series” story, with its original cast.

But when Paramount’s most profitable television property was coming to an end, they decided to take the crew of “Star Trek: The Next Generation” to the silver screen. This put Captain Jean-Luc Picard (Patrick Stewart), Mr. Data (Brent Spiner), and the other TNG stars in feature films rather than on syndicated television.

Following “Star Trek: Generations,” which was the first film featuring the TNG cast, the series spawned three sequels of its own — “First Contact,” “Insurrection,” and “Nemesis.” This final film turned out to be either a “franchise killer,” as Trek Report proposes, or a symptom of “franchise fatigue,” as Inquistir says.

Written by John Logan and Spiner, “Nemesis” featured an attack by the Romulans and their new subspecies, the Remans. They were bent on destroying the Federation. They were led by a Picard clone named Shinzon, who was played by a young Tom Hardy.

Thanks to numerous issues, the most notably being that it made just $7 million, Paramount decided not to make a fifth film with the TNG crew. Early on, there were plans for a sequel, which also would have been written by Logan and Spiner.

Patrick Stewart on the ‘Nemesis’ Sequel

“While we were filming ‘Nemesis,’ an idea was being developed by John Logan, the screenwriter of ‘Nemesis,’ and Brent Spiner for a fifth and final movie,” said Stewart, according to Airlock Alpha. “It was a very exciting idea for a screenplay. It would have been a real farewell to ‘Next Generation,’ but it would have involved other historic aspects of ‘Star Trek’ as well.”

Spiner commented on this idea to DreamWatch magazine prior to the release of “Star Trek (2009).”

“I don’t think it’s a great idea to do a prequel to anything,” Spiner told journalist Richard Matthews, who was the editor of DreamWatch.

“When has that ever been interesting?” Spinner asked in the interview. If Enterprise really said anything, it was, ‘Don’t go back, go forward.’ That’s part of the whole beauty of ‘Star Trek’ — it’s always been about ‘Go Boldly Where No One Has Gone Before,’ not ‘Go Back to Where They Once Were That We Never Saw.’ I think that before that film gets made, they’ll have a completely different idea of what it should be.”

Spiner told Matthews that the idea was like a “Justice League” of “Star Trek,” where the greatest villains in Trek history would face the franchise’s best heroes.

“Something would bring all the great ‘Star Trek’ villains together, from Khan to Shinzon, and Picard is the only person who could stop them, and he actually has to go through time and pluck out the people he needs to help him,” Spiner said. “He goes back to the moment before Data blows up and takes him back to get Kirk and Spock, and go even further back and get Scott Bakula’s character, Archer. The problem with that more than anything is cost — how do you pay for that?”

This, of course, never happened, as the Trek reboots took off, led by J. J. Abrams.

While the “Justice League” for Trek never happened in theaters, it did happen in the comics. Marvel Comics explored this idea in their 1990s series “Star Trek Unlimited.” In the seventh issue in the series, Kirk and Picard switched places in time, thanks to a game played by Q and Trelaine.

IDW also published “Star Trek: The Q Conflict,” which put the crews from “The Original Series,” “The Next Generation,” “Deep Space Nine,” and “Voyager” together in one adventure.

How Gabby Petito’s Death Exposed a Dark Side of #VanLife

Mahesh Manjrekar: I didn’t want to act in ‘Antim’, Salman forced me to do it – Times of India

Are Ariela & Biniyam Together in the U.S. or Ethiopia?

Why Did Mina Starsiak Hawk Decide To Become an Author?

As curtains rise again, the theatre is set to look very different