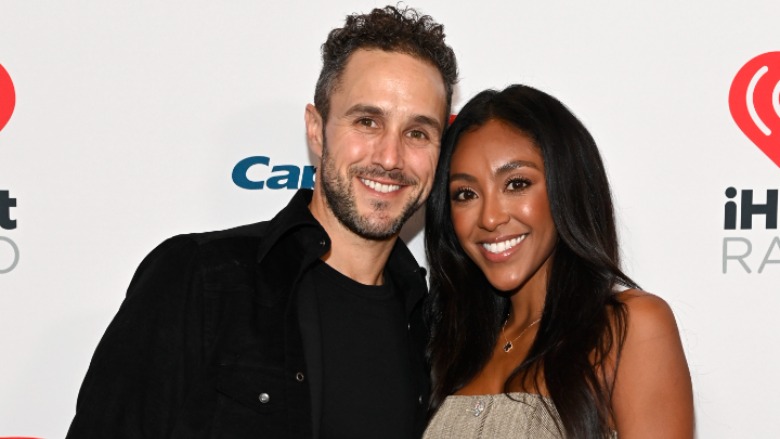 The duo is back together after spending several weeks apart while Adams co-hosted the next season of “The Bachelorette” alongside Kaitlyn Bristowe. Tayshia is a presenter at the festival this weekend, and brought her fiance along as her hot date.

Tayshia wore a two-piece ensemble that consisted of a strapless crop top and matching pants. Zac was fairly dressed down in a black shirt with a black jacket, black pants, and a pair of olive green sneakers.

The couple posed for photos — and even shared a steamy kiss, much to the delight of nearby photographers. Zac dipped his fiancee and held her leg up at his waist as she gripped the side of his face in a sweet and mildly steamy exchange.

Overall, the couple appeared to have a great time at the event.

Tayshia Showed off Her Engagement Ring

Tayshia took full advantage of the cameras on the red carpet and made sure that everyone could get a good glimpse of her stunning Neil Lane engagement ring. Although she and Zac have made other public appearances, this red carpet event was pretty official — so she had a bit of fun with her fiance, really capitalizing on her “Bachelorette” fame — and success.

As Tayshia posed for photos by herself, she held up her left hand to put her sparkler on display.

Tayshia and Zac got engaged on the finale of “The Bachelorette,” which aired in late 2020. In an interview with The Hollywood Reporter, Tayshia revealed when she really knew that Zac was “the one.”

“There were multiple moments where I saw myself envisioning a life with him. I guess it really solidified when my family was involved, just because I’m really close with my family. You don’t just marry an individual, you also marry their family. And it was really important for me to see him with my brothers and see how he interacted with my parents. My dad is kind of protective over me, if you haven’t noticed! So, to get his approval is everything. He really does not want to see me get hurt again. I’m his first born; he’s very protective over that. When he was with my family [I knew it was Zac],” she told the outlet.

Tayshia and Zac aren’t in any kind of rush to get married. When they are together, they are focused on each other — and exploring all of the things that New York City has to offer. Although Tayshia was located on the west coast when she met Zac, she has since moved to the Big Apple, where she spends the majority of her time when she isn’t working.

“You kind of, like, put a little cap on a lot of the things people to do. So now we’re really able to have fun. I’m really enjoying life,” Tayshia added.

The two tend to keep their personal lives off of social media, and will sometimes go weeks without posting photos or videos together. This has caused mass panic amongst “Bachelor” fans, and tons of break-up rumors have swirled over the past several months. So, how do Zac and Tayshia handle them? They ignore them — for the most part.

“Any time you’re in the public eye, there are going to be people that want to start sh*t and say things. I think one of the things we’ve done a really good job of as a unit is filter through what’s real and what’s not,” Zac told E! News on September 9. “At the end of the day, there’s going to be haters and people who are going to try to drum sh*t up and we choose not to give that energy,” he added.

Annabelle Sethupathi Review: A comedy with an interesting premise, but flat execution

Broadway audiences will need proof of vaccination and masks

Anshula, Khushi and Shanaya Kapoor’s first “sisters only” vacation is all things adventurous! – Times of India

Love Island viewers get ‘the ick’ from ‘awkward’ reunion episode

Olympic gold medallist Ariarne Titmus, 21, receives the key to the City of Launceston after Tokyo