‘Star Trek’ Actor Isn’t a Fan of the Religious Right, Trump, or Anti-Vaxxers 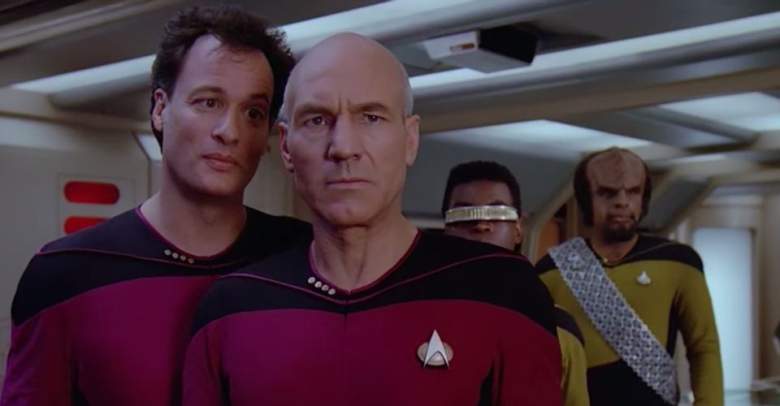 John De Lancie (Q on “Star Trek: The Next Generation”) isn’t at all like the egotistical, omnipotent character he plays. Instead, he’s a down-to-earth, ardent fan of science, even according to his own website that reads: “So, you’ve arrived! Let’s pause for a moment of science.”

He acted in the “Scopes Monkey Trial” and helped write the “Kitzmiller v. Dover Area School District,” plays both covering the separation of church and state. The “Kitzmiller v. Dover” play is especially pertinent to today. The actual trial took place in 2004, where the Dover Area School Board of Directors (a school board in Pennsylvania) approved the teaching of “Intelligent Design” in class. Some area parents fought the school board, taking them to court … and won.

Although the trial took place in 2004, it’s not a stretch to see the parallels to today. And if you were curious, de Lancie draws them out.

When asked by PhACT (Philadelphia Association of Critical Thinking) about how his interest in science began, he recalled a book — Mysterious Island — by Jules Verne. He wished he was able to discern information and make his way, solving problems. He liked the idea of being in charge of his own destiny.

It may also be because de Lancie was diagnosed with Dyslexia. The learning disability was so debilitating that he joined a small school where he received more attention and help. For the record, to this day he indicates to PhACT that reading and learning the script are the most challenging parts of acting.

De Lancie says what changed the direction of his life though was understanding how some people don’t believe in science. College students were at a Q&A for the “Scopes Monkey Trial” play. More than half the room of college students in the room believed the earth was created at a specific time — Oct. 22, 4004 B.C. on a Sunday.

Perhaps it’s why he’s taken on talking with young people so often. The Secular Students Alliance asked De Lancie to speak to their graduating class. In the process of speaking to them, he addresses how his generation had good intentions, at least at the beginning, but had lost their way. He blames Baby Boomers for destroying the climate, starting conspiracy theories (that led to Trump and anti-vaxxers), and hoarding money while driving up debt. He challenges Generation Z to take on these challenges.

De Lancie may play a god on “Star Trek,” but he doesn’t believe in God. That’s not to say he doesn’t respect people who are believers. In fact, in the PhACT interview, he talks with admiration about a religious friend. But he indicates this friend also thinks critically — is curious about the world and eager to get answers without falling back on religious doctrine. (Although he doesn’t believe in — what he calls — “magical thinking.”) In the PhACT interview, he says, “There’s a fine line between faith and delusion.”
It’s why he laments some of the thinking today, including conspiracy theories.

Kicked Out of Sunday School

According to PhACT, de Lancie says he blurted out at Sunday school that nothing was making any sense. After that comment, he was promptly removed and asked not to come back. Although he went to church, he confessed to the Skeptical Inquirer that he felt manipulated there … and didn’t like it.

Question to John de Lancie… If you could have Q’s power in the real world, who would you like to pop in on to annoy & why?

John: Donald Trump, come on wouldn’t we all say?

Not a Trump Fan

When talking about the former president of the United States to the Skeptical Inquirer, de Lancie calls Trump a “prodigious liar.” He goes on to say:

I felt compelled to take the audience through what it was like to play dishonest characters. As actors, it’s our job to get into what that’s like to be these types of people.

In fact, he joined the anti-Trump group (Trek Against Trump) along with other actors, writers, and producers.

Anti-Vaxxers and Anti-Maskers Bug Him

De Lancie draws a parallel between the polio vaccine and the COVID vaccine, indicating they’re both “a miracle vaccine.” He marvels even at the wonders of science that a vaccine for COVID was created so quickly and so readily available.

The distinction though he makes is startling — polio killed about 4,000 people and yet caused parents to panic. Everyone mobilized quickly to get the vaccine. As of the writing of this article, Google indicates more than five million people have perished from COVID and only 58.5% are vaccinated.

De Lancie can’t fathom why people refuse a life-saving drug. He admits with some chagrin that if COVID only affected those who chose not to vaccinate, he may be all right with the notion. (He’d let Darwin sort it out, he quips.) However, he realizes those who are unvaccinated are impacting those who are, including the immunocompromised.

QAnon Really Gets Under His Skin

When prompted about whether he was irritated about the conspiracy theorists taking on the Q persona, De Lancie told PhACT, “I play a god, not an idiot ….”

Exasperated, he goes onto to say, “QAnon is “too stupid for words.”

All in all, de Lancie believes it’s important to think critically, revel in science and fact (rather than conspiracy theories and misinformation). But perhaps the reason he believes in humanity rather than a god or gods is because he cares about his fellow man. He touts the accomplishments of humans, such as landing on the moon. He knows man can overcome challenges, such as creating COVID vaccines quickly to vaccinate as many people as possible. He hopes the same is true with overcoming challenges such as climate change.

His humanity runs deep. Not only is he involved in promoting science in schools and critical thinking, but he’s involved in ending homelessness and hunger, and more.

As Q would chide Picard for humans’ flaws, pointing out how pathetic and dangerous our species is, de Lancie seems to believe mankind can overcome challenges. They just, he might argue, only need to rely on science to do so.

‘The Challenge’ Finalist Calls Out Network: ‘Wake Up MTV’

KRK claims Aryan Khan’s life is in danger: Hope he will be able to bear this pain – Times of India

Dr. Phil and CBS Sued Over Alleged Sexual Assault of Teen at Ranch They Recommended

Daksha Nagarkar is the queen of selfies; take cues