Stanford Murders Victims: How Were the Women Killed? 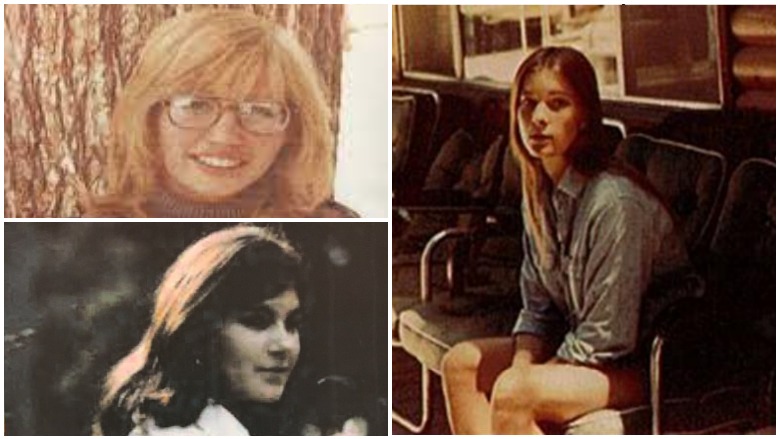 Janet Ann Taylor, Leslie Marie Perlov and Arlis Perry were three women who were murdered in 1973 and 1974 in slayings that came to be known as the Stanford murders. However, decades later, investigators determined the women were killed by two different men, Stephen Blake Crawford and John Arthur Getreu.

Stephen Blake Crawford was identified as the prime suspect in the death of Perry in 2018, who was found brutally murdered in a church at Stanford October 13, 1974. John Arthur Getreu was arrested in the murders of Taylor and Perlov around the same time. DNA evidence linked the men to the murders decades after the cases had gone cold.

Perry was brutally murdered in a church at Stanford University, where Crawford worked as a security guard, The Mercury News reported. Perry had gotten into an argument with her husband, Bruce Perry, a Stanford pre-med student. Arlis Perry told her husband she was going to the church to pray at about 11:30 p.m. the night of her 1974 murder on October 13. Bruce Perry called police at 3:30 a.m. when his wife did not return home. Police found the doors of the church were locked. Crawford was in charge of locking the doors and claimed he found Perry’s body, Santa Clara County Sheriff Laurie Smith said in a 2018 press conference.

The Mercury News reported that an ice pick had been driven into the back of Perry’s skull, and said that “her body had been violated with church candles.” Evidence showed she had also been strangled, the newspaper reported.

Smith said during the press conference that the murder was “a terrible, terrible crime,” and sent her sympathies to the family of Perry. She said the case has been close to her throughout her law enforcement career. She started with the sheriff’s office soon after Perry’s death when she was not much older than Perry, she said. Investigators considered Crawford a person of interest for many years, but they were not able to gather enough evidence to charge him until 2018.

“We look at this as closure and we believe that we had solid evidence to arrest and even convict Stephen Crawford for the murder of Arlis Perry,” Smith said.

However, Crawford did not live to face his charges. Smith said deputies responded to Crawford’s studio apartment and knocked on the door on June 28, 2018, with a warrant for his arrest. Crawford claimed he needed to get dressed, but after several minutes, they believed he was stalling and unlocked the door using a key they received from the landlord. When they entered, Crawford was sitting on the bed with a gun, Smith said. She said he fired one shot into his head, killing himself. A suicide note was found nearby, she said.

The murder of Perry was discussed in the Netflix docuseries, “The Sons of Sam: Descent Into Darkness.” Investigators believed her murder may have been tied to the occult or Satanic rituals. The Son of Sam killer, David Berkowitz, had claimed to know about Perry’s murder, but investigators ruled out any real connection, they said on the series.

The speculation over the link began when Lt. Terry Gardner, a deputy sheriff in Ward County, North Dakota, who was involved with the son of Sam case, received a package from Berkowitz, according to the docuseries. It included a book, “The Anatomy of Witchcraft,” with a note inscribed in the margins. It said, “Arlis Perry, hunted, stalked and slain. Followed to California” and “Stanford Univ,” according to the series.

Ken Kahn, a retired detective with Santa Clara Police Department, said on the series that he received a letter from Berkowitz in 1981, which said he may have information about Perry’s murder. Kahn and other investigators went to New York to interview Berkowitz, he said on the series, but Berkowitz did not reveal who the supposed killer was.

Through the interview, Kahn said they determined Berkowitz was “just kind of jerking us around.”

It took 45 years for charges to be filed in the murder of Taylor, but only one hour for a jury to decide whether Getreu was guilty, according to the San Mateo County Sheriff’s Office. On March 24, 1974, sheriff’s deputies responded to Sandy Hill Road, where the body of Taylor was found near Interstate 280, the sheriff’s office said. She had been strangled and dumped in a ditch alongside the road, the statement continued.

“The murder investigation was assumed by the San Mateo County Sheriff’s Office but for many years, Taylor’s murder remained unsolved despite the efforts of law enforcement,” the statement said.

The case was reopened in 2017 when new forensic technology allowed for a possible match, the sheriff’s office said. They received a report from the county’s forensics laboratory on January 3, 2019, saying a partial DNA profile matched Getreu. He was already jailed as a suspect in another one of the Stanford murders in the case of Perlov, The Mercury News reported.

The trial in Taylor’s murder lasted nearly a month, and a jury found Getreu guilty on September 14, 2021, of first-degree murder, the sheriff’s office said. His sentencing is scheduled for November 5, 2021, and the trial in the Perlov murder case is scheduled for 2022, The Mercury News reported.

Perlov was a 21-year-old Stanford graduate whose body was found February 16, 1973, before he was linked to Taylor’s case. Perlov, like Taylor, had been strangled, The Mercury News reported.

Getreu will be transferred back to the San Mateo County Jail after his sentencing, the news outlet reported. His jail record shows his bail is set at $10 million in Taylor’s murder and he is denied bail with a detainer in Perlov’s death.

A woman known as Diane Doe agreed to testify against Getreu in Perlov’s murder case, according to Palo Alto Online. She testified she was 18 when Getreu raped her and tried to strangle her.

Perlov was murdered in 1973 in the Stanford foothills, and her body was found strangled and partially clothed, the news outlet reported. Her undergarments and stockings were stuffed her throat, prosecutors said during the court hearing. Officials asked Doe whether she was willing to testify against Getreu, and she said she was willing to face him again and bring him to justice, the news outlet reported.

Officials and the family of Taylor said that although it took 47 years to find closure in her murder case, she was never forgotten.

Though it has taken 47 years, Investigators with the San Mateo County Sheriff’s Office have never wavered in their desire to bring justice to the family of Janet Taylor. Through the collaborative efforts of the Investigations Cold Case Unit, the Sheriff’s Investigations Bureau, and the District Attorney’s Office, we are proud to have finally secured a guilty verdict and closure in this horrific case. I would finally like to thank the jury for all their hard work and dedication to seeking out the truth. Ms. Taylor, you are not forgotten.

Taylor’s family also issued a statement to The Mercury News. It said:

We are pleased with the results of the trial. We miss Janet, but have many great memories of her. We want to thank the detectives and the DA’s office for all their effort and hard work in solving the case, and for the support and kindness they have always shown to our family.

David Letterman Remembers Norm Macdonald: ‘He Was the Best’

Is There a New Showmance in the ‘Big Brother’ House?

Who has been voted off Survivor so far?

Review: The Oracle of Karuthupuzha by Manu Bhattathiri

Gabrielle Union opens up about her surrogacy experience: ‘It was grief’