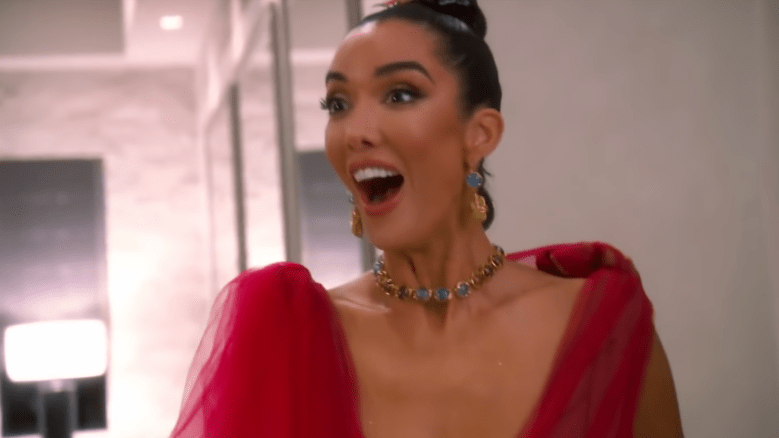 Noella Bergener is one of the newest additions to “Real Housewives of Orange County” and here are five things you probably don’t know about her yet.

According to Noella’s official Bravo profile, she’ll be dealing with a divorce and an unexpected death on her debut season.

“Noella Bergener’s world is turned upside down when her husband unexpectedly files for divorce,” her bio says. “Her lavish lifestyle gets ripped out from underneath her as the divorce poses questions about her financial future while she cares for her children. While her shocking predicament makes the others question what is really going on, Noella finds solace in her friendship with a sympathetic Shannon. With news of a recent death in her family, Noella finds her emotions, patience, and friendships tested, but that doesn’t keep her from doubling down and speaking her mind even when it results in a fiery backlash.”

Here’s what you need to know about Noella Bergener:

1. Noella Is Being Sued for Nearly $300k for a Legal Bill Dealing With ‘Paternity Action’

According to Radar Online, who obtained court documents on November 9, 2021, Noella is being sued for an unpaid legal bill by Creditors Adjustment Bureau, for breach of contract.

The details of the lawsuit read that Noella owes $293,832.22 to the law firm Fried and Goldsman and it was due to be paid on February 26, 2018. The money stems from a “paternity action” but she denies owing the money. She claims her first husband was required to pay the fees in the divorce settlement, the outlet reported.

Noella has one child, a 2-year-old son James Jr, who she shares with her estranged husband James Bergener Sr., the outlet reported.

Radar Online also reported that James Sr. is “accused of owing $5.8 million in back taxes” and the IRS and the State of California have both levied tax liens on James, the outlet reported.

2. People Are ‘Shocked’ Noella Thought It Would Be ‘Safe’ to Be on TV Show

In August, just as the show had begun filming, sources told Showbiz Cheat Sheet they were shocked by her decision to appear on a reality TV show, considering everything going on in her life.

According to the outlet, her close friends were “shocked she thought it would be safe to go on TV.”

Another source told Cocktails and Bravo, an Instagram account that is no longer active, that the couple are frauds.

“They are frauds. I can’t tell you too much (wish I could) but I anticipate you will get lots of details on their ‘marriage’ — how they met in particular — and their ‘kids.’”

On August 2, 2021, Noella filed for a legal separation from James, according to US Weekly. The couple was married in June 2020 and in her filing, she requested sole custody of their son, James Jr., the outlet reported.

According to TMZ, James filed for divorce in Puerto Rico in early August, though no specific date was given.

This came just weeks after news broke that James was being sued for more than $4 million by the IRS and the state of California for unpaid taxes, the outlet reported.

Noella had just begun filming and took to Instagram to give her feelings.

“I was just as shocked and disgusted to find out a week before filming … and not from my husband. My marriage has been a fight every day since,” she wrote, according to TMZ. “I am being very open about my journey and looking at every option to settle my husbands debts.”

4. Noella Was at a Housewives Dinner Where Glass Was Broken

According to Amanda Rae, a food blogger in Colorado, the ladies of RHOC were filing at Bosq in Aspen, CO and a fight broke out. The incident occurred on October 6, 2021, according to Radar Online.

The blogger wrote that a glass was broken on the table and the fight carried out into the alley behind the restaurant.

Viewers will have to wait for season 16 to air to see it all play out.

5. Noella Is Often Seen on Instagram in Puerto Rico

If you take a look at Noella’s Instagram you’ll see plenty of photos of the beauty in Puerto Rico.

“LOVING Puerto Rico. So safe welcoming and the yummiest food,” she wrote on a snap posted on August 9, 2020. “Cheers to beautiful Puerto Rico who have done such an excellent job managing the virus and giving us a trip we will never forget,” she wrote on one dated August 11, 2020.

Subscribe to the Heavy on Real Housewives newsletter here.

What to Watch in November: ‘Hawkeye,’ ‘King Richard,’ ‘Dexter’ and a New Beatles Doc

Another contestant has been evicted from I’m a Celebrity

‘Stealthing,’ or Removing a Condom Without Consent, Will Soon Be Illegal in California