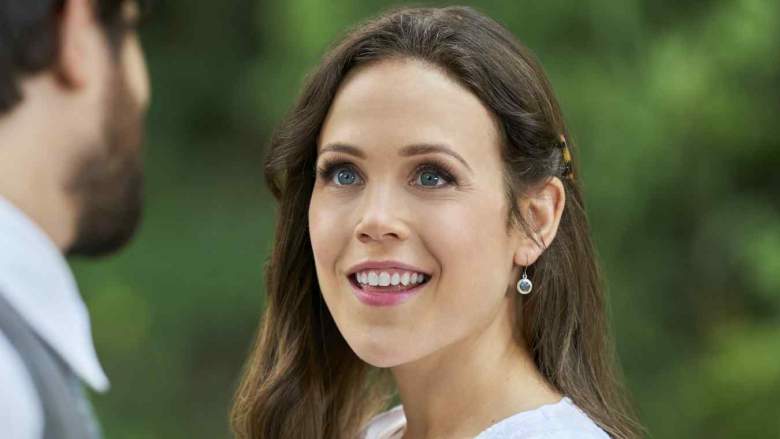 Elizabeth on When Calls the Heart.

Fans are eagerly awaiting the return of Hallmark’s “When Calls the Heart” in February. Quite a few behind-the-scenes photos have been shared, including a brand new photo of Elizabeth and Lucas on set.

Erin Krakow, who portrays Elizabeth, shared the new photo of Elizabeth and Lucas (played by Chris McNally) on her social media accounts. The two characters look happy in the photo.

Fans were excited to see the photo of the new couple.

One fan wrote, “Look at this power couple all matchy matchy!🔥”

Another fan wrote, “The future Mr. & Mrs. B ❤️ Love the matching colors 😍 Thank you for the picture 🙌”

Other fans noted that the two looked like they were dressed to match, with both of them wearing white and blue.

Fans have been wanting to see more photos of Elizabeth and Lucas ever since Elizabeth chose Lucas over Nathan at the end of season 8. At the time, her choice caused a bit of controversy among fans, half of whom were Team Nathan and the other half of whom were Team Lucas. McNally himself did not post to Instagram for a few months after the season ended, but he’s been posting on Instagram since filming started back up.

In September, he shared this photo of Elizabeth and Lucas.

McNally captioned the photo “Put a cork in it, Zane!” (This is a quote from the movie “Zoolander.”) The photo shows Erin Krakow and McNally having a little fun behind-the-scenes.

On Twitter, fans have been re-sharing the latest Elizabeth and Lucas photo.

One fan shared a closeup from the photo.

Erin Krakow Shared Another Photo of Elizabeth After a Night Shoot

Just two days earlier, Krakow shared another photo of Elizabeth standing on a road in a nightgown after a night shoot for season 9.

Pascale Hutton (Rosemary) replied, “This looks like the beginning of a terrifying movie.”

Her photo was shared the same day they had a nighttime shoot for season 9.

One fan replied, “Oh- I love for these behind the scenes photos!!! 💖 I wonder what is happening at night?? 🤔Thanks again! 💖💖💖💖”

Krakow shared a photo of her first ADR session.

The Instagram account @mirrormirroratelier, makeup artist for the show, shared a photo of Elizabeth on horseback in October.

Filming for season 9 is coming to a close. Director Peter DeLuise revealed on Twitter on October 25 that they had just started filming the last block for the new season.

While filming this last part of the season, DeLuise has also been sharing some videos of set tours on Twitter. Here’s where the Coulter’s bedroom is filmed.

He also shared the dentist’s building, which doubles as Lucas’ office because of limited studio space.

And here’s a photo of getting shots on the steps of a row house.

‘Tiger King 2’ and the Weird Rise of Documentary Sequels

The Strangest Time for Nostalgia Is Now

Times when Priyanka Pandit raised the temperature in crop-top

National Television Awards 2021: The stars give an insight into their NTA prep

Would YOU wear this to a meeting? Tammy Hembrow strips off into a crop top and racy cut-out trousers

Nany Gonzalez Opens Up About Coming Out & Dating Kaycee Clark