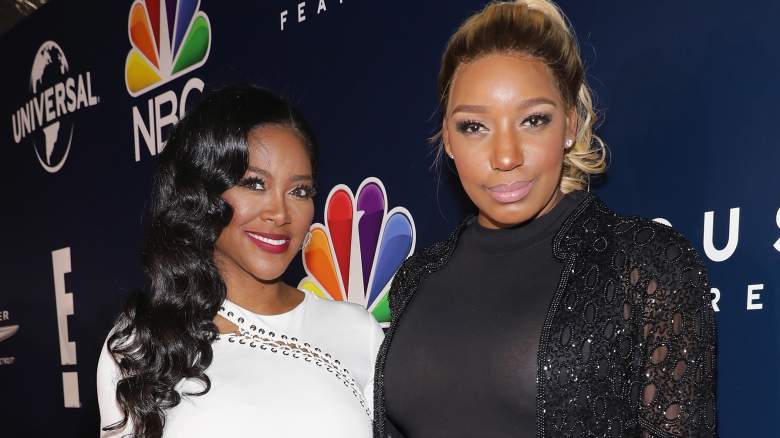 Kenya Moore reacts to the news that former “Real Housewives of Atlanta” co-star, NeNe Leakes might be interested in returning to the franchise.

On November 3, 2021, NeNe appeared on the talk show, “The Talk” and expressed her openness to returning to the show she helped make famous.

Now Kenya, her former co-star of seven seasons, is speaking out about her thoughts on a potential return.

“You know, I don’t know. I know she has a lot of fans and people love her, and definitely she has made her mark on the show and she made the show what it is,” Kenya said on E! Online’s Daily Pop. “I think that interview was from her, you know, wanting to come back.”

It sounds as though NeNe’s return is dependant on the contract, of which Kenya says she has no inside information.

“Whether there’s a future for her there in terms of with the network or, you know, the higher-ups, I can’t really speak to that.”

While appearing on Daily Pop, Kenya hinted that the beef we see in the “Real Housewives Ultimate Girls Trip” trailer between her and Ramona Singer might be a little bigger than we thought.

“I’ve never spent any real time with Ramona, I’ve just heard about her,” Kenya said on the show. “You know, her reputation precedes her. And I just think that I was calling her out a lot about her behavior before we even started the trip.”

According to Kenya, Ramona put the girls at risk of COVId-19 while they were in the bubble.

Despite Kenya not getting along with RHONY’s Ramona, there was another lady from the Big Apple who Kenya did get along with … Luann De Lesseps.

“I thought Luann would be like very, ‘Oh, I’m a countess,’ you know, and she wasn’t that way,” Kenya said told Daily Pop. “So I was really pleasantly surprised and we got along great. We have a lot of things in common, and she’s just one of my favorites.”

Luann seems to have returned the friendship and sent Kenya well-wishes when she began competing on “Dancing With the Stars.”

“Congratulations girl!” she wrote on Instagram on September 8, 2021. “You know I’m so jealous!! But happy for you!! Hating you & loving you at the same time.”

READ NEXT: Is NeNe Leakes Returning to the ‘Real Housewives of Atlanta’ Next Season?

The Bachelor ‘to be cancelled’ after low ratings; Channel 10 issues denial

Excerpt: Nick Offerman Climbed a Glacier With Jeff Tweedy and Lived to Write About It

When Esha Deol called Dharmendra ‘possessive’, revealed he didn’t allow sister Ahana and her to wear sleeveless tops and shorts – Times of India

‘RHOBH’ Star to Tell All in New Book

On This Day in 1991: When Javagal Srinath’s 6/21 Guided India to Test Victory Against South Africa