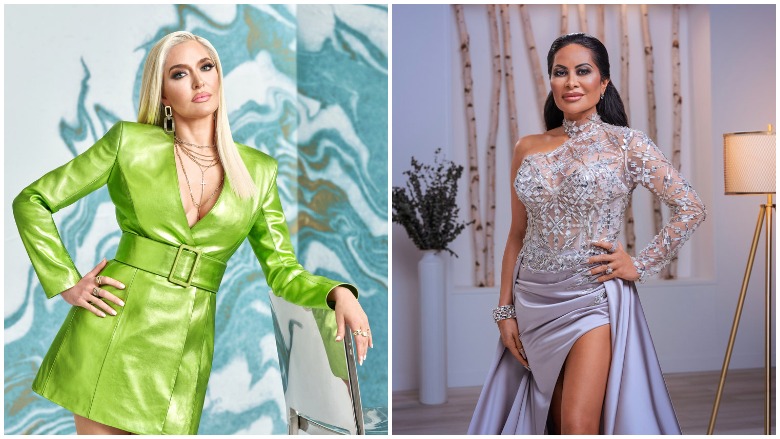 It’s the battle of the “Real Housewives” legal issues.

In a since-deleted Instagram story posted on September 2, 2021, “Real Housewives of Salt Lake City” star Jen Shah shaded Girardi through a meme. The story, which was captured by @Bravobybetches at the time, showed a side-by-side of Girardi crying with the caption, “Look at me. Look at my f***ing life!” Below Girardi showed a photo of Shah holding a martini glass with the caption, “BRB, hold my drink…”

Currently, both of the “Real Housewives” stars are facing a number of legal battles, with Shah being charged with federal crimes.

On March 30, Shah and her assistant, Stuart Smith, were arrested after they were both federally charged with conspiracy to commit wire fraud and money laundering through an alleged telemarketing fraud scheme. According to a press release from the Department of Justice U.S. Attorney’s Office of the Southern District of New York at the time, the scheme had allegedly been going on since 2012 and targeted those who were over 55 years of age.

Shah has pleaded not guilty to the charges.

Girardi herself is in a bit of a different spot, as it is her estranged husband who is being accused of embezzling settlement money from his clients. However, Girardi has been named in at least  one of the lawsuits, according to E! News.

When Shah was arrested, the cast of “The Real Housewives of Salt Lake City” was still in the process of filming for the upcoming season, so viewers will be able to get a firsthand look into what really went down at the time.

“Everything plays out in real-time,” RHOSLC star Heather Gay shared during a recent appearance on the So Bad It’s Good With Ryan Bailey podcast. “We are in it with her. We are going through it as friends, [and] as people who for the first time in [our] lives are public figures. And for the first time in [our] lives, we have to answer to not only [our] family and friends, but to a worldwide audience, and to also see [our] trials and struggles played out and subject to public opinion.”

Gay also added, “What I can say is this is the biggest, hugest thing that has happened to our community, and to our group of friends,  and to Jen personally, and to me personally. I mean, this is big, and it’s real.”

Both Stars Are Refusing to Quit ‘The Real Housewives’

God forbid I fight for myself. 🙄 Stop thinking I’ll quit just because you think I should. Fuck that.
Thank you to everyone that is supportive and understanding. ❤️
I will not be stopped. 💎

Even though some fans may want to see Girardi and Shah leave their respective “Real Housewives” franchises, neither of them have listened. Girardi recently spoke out about the matter in a September 1, 2021 Tweet.

“God forbid I fight for myself,” Girardi wrote. “Stop thinking I’ll quit just because you think I should. F*** that. Thank you to everyone that is supportive and understanding. I will not be stopped.”

Dating rumours continue to fuel as Angelina Jolie, The Weeknd seen together in LA – Times of India

What the Military Can Learn From ‘Dune’

Everything We Know About Candace Cameron Bure’s 2021 Christmas Movie

Travel With COVID: In The Midwest, Casual Attitudes Lay The Tracks For Delta Surge