Is Tomi Village Really a Mall In Japan? 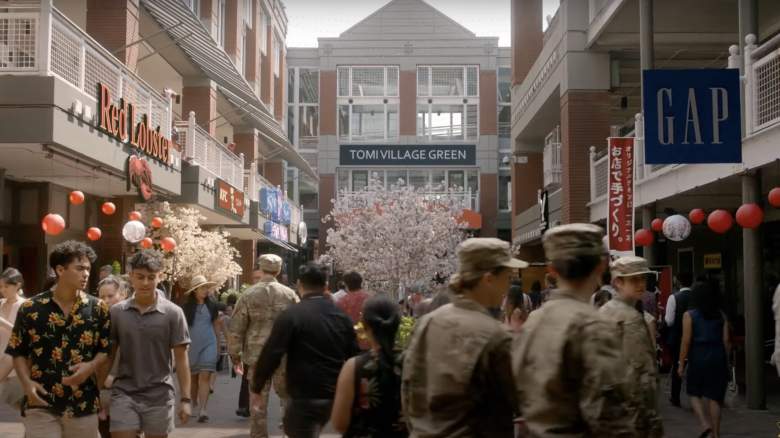 Tomi Village as it appears in season 3 of “Cobra Kai.”

Season 3 of “Cobra Kai” brought back various characters from the “Karate Kid” franchise that many fans might have assumed were stuck in the relics of cinematic archives. In episode 4 of the latest season, however, we are re-introduced not only to “Karate Kid Part II” characters Chozen and Kumiko, but also the village of Tomi, Okinawa, also featured in “Part II” nearly 35 years ago as Mr. Miyagi’s hometown.

As Daniel LaRusso returns to Tomi Village, however, it is not presented as the rich, verdant landscape that it once was in the 1980s, but instead as a large, modern, westernized mall. In the show, it is said to have changed because the village’s crops dried out and the area was therefore barren, but how much of that episode was really shot in Japan, and was there really a mall in the spot where the original village was filmed? The three “Cobra Kai” creators break it down in an interview with SlashFilm.

Here’s everything you need to know about where the Japanese scenes from “The Karate Kid” and “Cobra Kai” were shot.

Although Okinawa is a real prefecture in southern Japan, the village of Tomi is fictional. According to IMDb, although the Okinawan countryside was scouted for filming during production for “The Karate Kid Part II,” it wasn’t suitable for filming as Tomi Village due to the presence of military bases. As a result all the Okinawa scenes were instead shot on the island of Oahu, Hawaii. In order to replicate the real Okinawa, several Okinawan houses were reconstructed on private land owned by a local physician, who agreed to let his land be used for the film.

The Design For Tomi Village Was Based On Real Japan

In an interview with SlashFilm alongside fellow co-creators and writers Jon Hurwitz and Hayden Schlossberg, Heald said that, upon visiting Okinawa, it felt “very modern,” and that “It does feel like you’re almost in the valley at times and you really have to go search for those areas that feel like okay, this is definitely not Southern California.”

He went on to explain that, similar to how Hawaii was redressed for shooting in “Part II,” the mall scenes in particular were filmed in the United States. He explained:

That mall where they go in our show is here in Atlanta that we redressed. It was partly because we felt you don’t have to go halfway around the world to find a place that looked exactly like this place here. We wanted to make sure that we got the most bang for the buck when we were in Okinawa and get the places that you couldn’t get here.

Heald said that it was due to the fact that none of the original Tomi Village was shot in Japan that  they felt a need to do so in “Cobra Kai:”

[“Part II”] wasn’t in actual Okinawa, so for us it was real and very important that we actually took the production to Okinawa and finally delivered the Karate Kid to the island. We took some creative liberties with what happened to this somewhat of a fictional village.

Schlossberg added, “We just love that they’re excited that they just got a Jersey Mike’s. From Daniel coming from New Jersey, it’s the last thing he’s looking for.”

The real Okinawa can be seen in other scenes from episodes 4 and 5, including the establishing shots, Daniel’s scenes fighting and training with Chozen, and the scene of Daniel overlooking the viewpoint onto various different islands, as per Atlas of Wonders.

All of “Cobra Kai” is currently available to stream on Netflix. Season 4 will be released December 31.

Teddi Mellencamp Looks Unrecognizable: ‘Went to the Dark Side’

Diwali 2021: Laxmi and Ganesh Pooja Timings and Widhi. All You Need to Know