Is Tim McGraw on ‘Yellowstone’? 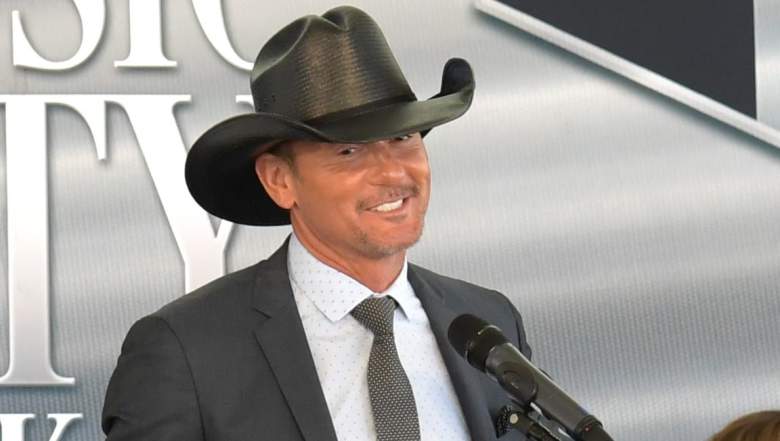 Is Tim McGraw going to be on “Yellowstone” in season 4? A lot of fans are asking this after catching a glimpse of him during the episode. But no, he’s actually going to be in the prequel series.

Paramount wrote in a press release about “1883”:

1883 follows the Dutton family as they embark on a journey west through the Great Plains toward the last bastion of untamed America. It is a stark retelling of Western expansion, and an intense study of one family fleeing poverty to seek a better future in America’s promised land – Montana.

McGraw and his wife, Faith Hill, will both be part of “1883,” which is being helmed by Taylor Sheridan. The series premieres December 19 on Paramount Plus, not on the Paramount TV channel.

Faith Hill plays Margaret Dutton and Tim McGraw plays James Dutton, John Dutton’s great-grandparents. Audie Rick and Isabel May play their children (and May is also the series’ narrator), EW reported. The series is about the family’s journey of herding longhorn cattle from Texas to Montana.

EW reported that the series will answer some questions about how John Dutton’s family acquired as much land as they have. Taylor Sheridan said the series will also “paint a true reflection of a time and a place.”

The Series Is Filmed in a Realistic Setting

Tim McGraw told EW about the series: “The season is the journey… To see my beautiful wife on horseback, firing guns, and having dirt all over her face, I just sit in awe. She’s a strong woman, anyway. Taylor said early on to me, ‘Man, you’ll just get on that horse. You’re not scared of anything.’ I said, ‘I’m scared of one thing. She’s right over there.’”

Sam Elliott plays Shea Brennan, the Duttons’ wagon master and a veteran of the Civil War. Elliott told EW that the series stands on its own, even though it’s a prequel to “Yellowstone.”

Taste of Country reported that the series will be filming on actual landscapes rather than sets, in order to give the series more realism. They also sought to wear authentic clothing from the time period and spent a lot of time on horseback.

Hill told Taste of Country about the series: “He (Sheridan) is portraying the story in a way that was lived.”

She said despite how tough the terrain was while filming, she became comfortable with the cast and crew rather quickly.

Since they were filming during the summer in Texas, Hill said it was challenging at times, Taste of Country reported. She had to wear an authentic corset while riding a horse for the series, but it was worth it.

“This is real work,” Hill said. “…I think so many actors are drawn to Taylor’s writing because he is portraying the story in a way that was lived. I gained so much respect for cowboys.”

Russell T Davies RETURNS as the leading producer on Doctor Who

Happy Valley to return for third and final series in 2022

Stephen: Adil Ray looks solemn as he takes on the role of Imran Khan in the Stephen Lawrence drama

What time do the islanders wake up on Love Island?

#HonslaRakhShehnaaz: A week ahead of the release ‘Honsla Rakh’, Shehnaaz Gill trends again – Times of India

‘What is Squid Game?’: SNL enjoys dig at Republicans over Facebook hearing