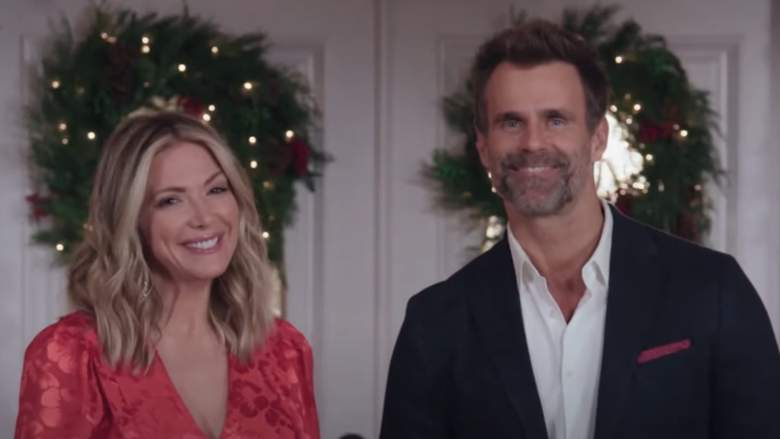 GAC Family’s Christmas special, called “Welcome to Great American Christmas,” is airing on Saturday, October 16 at 8 p.m. Eastern/5 p.m. Pacific/7 p.m. Central, according to an Instagram video. (However, GAC Family’s website says the premiere time is 8 p.m. Eastern/8 p.m. Pacific. If you’re in the Pacific time zone, you might want to check with your local listings.)

Cameron Mathison and Debbie Matenopoulos are hosting the event. They were the hosts of Hallmark’s daytime “Home & Family” series before it was canceled earlier this year.

Matenopoulos said the preview special will be a “sneak peek at the great new, original Christmas movies we are bringing to all of you this holiday season, plus special surprises, your favorite stars, and so much more.”

The event was originally scheduled to air on October 24, but now it’s been moved up a week and is airing on Saturday, October 16 instead. It’s not clear how long the event will last. A search on TV Guide’s DirecTV listings for GAC did not yet show the special in the lineup for Saturday night.

When Matenopoulos first posted about the event on Instagram, she said: “I am so excited to be joining my co host and friend @cameronmathison once again for what I promise will be your NEW destination for all things Christmas and SO much more… Being able to share this news with you all warms my heart to no end. Can’t wait to see you there and Welcome you all Home!!!”

NextTV reported that the special would preview all the upcoming holiday movies, along with having celebrity guests sharing craft ideas and recipe ideas for Christmas.

GAC Family’s new date and time for their Christmas preview special is also the same date and time that The Hallmark Channel is airing its Countdown to Christmas preview special. The major difference is that Hallmark used to host its special following a new movie. This year, for the first time, it’s airing its countdown special during an original movie.

According to a preview ad that you can watch on The Hallmark Channel’s website, this year’s special is going to air during the premiere of Hallmark’s “Advice to Love By” on October 16. So if you want to catch sneak peeks of the upcoming movies, you’ll need to watch them during the new Hallmark movie. “Advice to Love By” airs on Saturday, October 16 at 9 p.m. Eastern/8 p.m. Central.

This year, Tamera Mowry-Housley and Danica McKellar will be hosting the Countdown to Christmas preview special.

If the Great American Country special on GAC Family only airs for an hour, then it will be over just before Hallmark’s Countdown to Christmas preview special begins. However, it’s unclear as of the time of this article’s publication how long the GAC Family preview special will be.

GAC Family was launched by Bill Abbott, the former CEO of The Hallmark Channel.

‘The Activist’ TV Show is ‘Changing the Format’ Following Criticism

How to Play Every Game From Squid Game (and Not Die)

England Could Boycott Ashes Down Under in View of Strict Bubble Life: Reports

As folic acid is finally added to flour… should we now put iodine in salt to boost babies’ IQ?