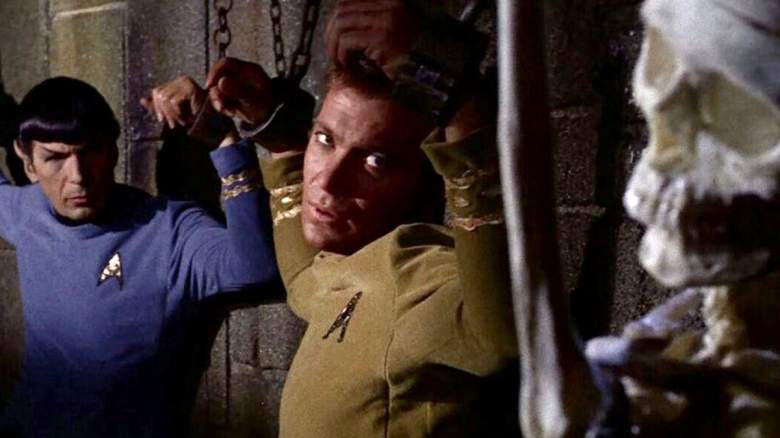 Each year that passes, more and more Americans take part in Halloween. According to research conducted by the National Retail Alliance, 148 million citizens plan to participate in the spooky fun this year. The report also states that households will spend $94 (on average) each on decorations, costumes, candy, and other Halloween-related paraphernalia.

As all of this is happening, there are no shortage of “Star Trek” costumes available, and the franchise is popular with children, adults, and pets. Even New York Mayor Bill de Blasio dressed up this year as Captain Kirk (while wearing a blue Spock uniform).

This time of year often pushes television shows to create unique holiday theme episodes — “The Office” and “The Simpsons” have done this quite a few times. “Star Trek” fans debate the necessity of having holiday-themed episodes on Trek, which is supposed to be beyond religion.

In a Trek bulletin board, one fan summarized this opinion by saying: “maybe in the supposed secular future, humans have done away with religious festivals.” Others disagreed, stating that many Bajoran and Klingon festivals were celebrated. The Hindu Festival of Lights (Diwali) also got a mention.

While the debate was lively, all seemed to agree that it was a good thing that Roddenberry’s creation avoided the universally disliked “Star Wars Holiday Special.” Even “Star Wars” creator George Lucas admitted that TV special was a mistake.

But, many fans may not be aware, there is a Halloween episode. “Catspaw” aired during the second season of “The Original Season” and is about as spooky as a Trek episode can be. It featured thick fog, floating bodies, skeletons, castles, black cats, and more. Kirk (William Shatner) even told Spock (Leonard Nimoy) that he’d fit in well at an Earth celebration of Halloween. It even aired the week of Halloween in 1967.

“Catspaw” centered around two alien beings who took the form of humans (and a cat). These characters lured Kirk and some of the other crew to a planet. They encountered a castle full of skeletons, dungeons, and other things intended to scare the Enterprise crew. Eventually, Kirk, Spock, and McCoy (DeForest Kelley) were able to outwit these beings, destroy the illusion and escape the planet. Through this, Kirk had to seduce a beautiful woman (played by actress Antoinette Bower) named Sylvia and flee from her as she transformed into a giant housecat.

So, for those who have seen and not seen “Catspaw,” here are five fascinating behind the scenes facts about Trek’s only holiday episode:

“Catspaw” Was Written by the Creator of “Psycho”

Writer Robert Bloch is well known for penning many memorable science fiction, fantasy, and horror genre stories, including quite a few projects which became television episodes and movie plots. For “Star Trek,” he was responsible for three stories which were reworked into episodes. “Catspaw,” “What Are Little Girls Made Of,” and “Wolf In The Fold.” Each of these stories were adapted from an earlier written work.

Bloch wrote “Psycho” in 1959, and director Alfred Hitchcock turned it into a blockbuster film in 1960.

Walter Koenig, cast in the role of Ensign Pavel Chekov, made his first appearance on the Enterprise in “Catspaw.” Koenig made the team because he resembled The Monkees’ Davy Jones. He told TV Insider that he wore a “lady’s wig for my first six or seven episodes” until his hair grew out.

The Show Used a Prop From “Gilligan’s Island”

Dressing the characters for an alien world was not cheap. And the cloak worn by actor Theo Marcuse (Korob) was a hand-me-down from “Gilligan’s Island.” As reported by MeTV, actor Bob Denver wore the same wizard’s cloak in the episode “Lovey’s Secret Admirer.”

Many years later, Trek would reference the campy sitcom again. This time, it was on “Star Trek: Voyager,” where the lyrics from the famous “Gilligan’s Island” theme were displayed on a computer screen.

Were the Three Witches a Nod to “Macbeth?”

While not mentioned in the story or script as a reference to the classic play by William Shakespeare, on the surface, it looks that the three witches in “Catspaw” might be a nod to the Three Witches in “Macbeth.” The witches in “Catspaw” moaned and warned Kirk, Spock, and McCoy to leave the planet; their voices were also reminiscent of the vocals in “2001,” when the early humans encountered the Monolith.

The famous horror writer, H.P. Lovecraft, took a young Robert Bloch under his wing. Because of this, Bloch is said to have been a devotee of Lovecraft and made references to Lovecraft’s mythos in his own work. Those interested can read more about their relationship through their collected letters.

For those who may not know, Lovecraft created the Cthulhu monster and mythos in his 1928 work, “The Call of Cthulhu.” The Cthulhu, also known as the “Great Green Ancient One,” was an alien that terrorized humans nearby with its tentacled look and mind-bending powers. Lovecraft’s writings have inspired video games, board games, and several films.

Bloch referenced the “Ancient Ones” in both “Catspaw” and in “What Are Little Girls Made Of.” Could this mean that in the future, a “Star Trek” story could feature the Cthulhu?

Squid Game creator says Netflix is going ahead with season 2

Insiders Say Porsha Williams May Not Be Leaving RHOA: Report

Sara Ali Khan gets snapped outside a production house; Is a new project on the cards? – Times of India

GMB criticised for inviting Biggins to discuss Superman being bisexual