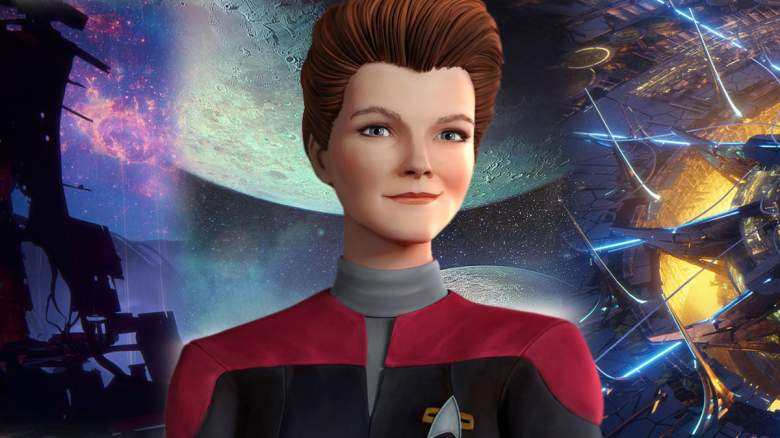 As readers may have guessed, the staff at Heavy who covers “Star Trek” is ready for the newest installment of the iconic franchise — “Star Trek: Prodigy.” Heavy writers and staff members have submitted stories on many different “Prodigy” related topics, including — the show’s creative team, the voices behind the main characters, the actors who bring the villains to life, and the A-list group of names that were just revealed as part of the show.

In short, the first episode is fun and fast. It will grab the attention of both the children and adults who watch the show and keep them wondering what will happen next. The music is superb, and the animation is film quality. “Prodigy” is a worthy entry into the “Star Trek” pantheon of stories.

Now that the show has finally streamed on the Paramount+ network, we can share some of the spoilery details from this first episode — “Lost & Found.”

The Beginning is like “Star Trek VI: The Undiscovered Country”

As the audience is introduced to Dal (Brett Gray), he toils away in some sort of mining operation. This world looks a bit like the Klingon prison colony that fans saw on “Star Trek VI: The Undiscovered Country.” Much like Kirk (William Shatner) and McCoy (DeForest Kelley) before him, Dal is expected to use laser drills to free minerals from the rock.

These minerals appear to be crystalline and could possibly be a dilithium-type of power crystal. Dal also walks past quite a few different species of alien creatures, and none can communicate with each other, just like on Rura Penthe.

Dal Is Not Sure of His Species

The main character Dal is a purple-skinned, big-eyed, spiky-haired dude with a literal “rat tail” jutting from the back of his skull. He says a few times that he’s not aware of his species, which seems to be just about the same for many of the other creatures forced to work on the mining operation.

This is reminiscent of how Odo (Rene Auberjonois) from “Deep Space Nine” was unsure exactly what he was when the Cardassian and Bajoran scientists found him.

When fans finally get a good look at the ship, which Dal and the other characters get to take for a ride, they may recognize some design hints from the Kelvin version of the U.S.S. Enterprise. While Dan and Kevin Hageman have said that “Prodigy” is set in the Prime Timeline, the Protostar definitely takes some cues from the movie Enterprise, especially in the ships’ exterior lines and nacelle area.

Most Trek fans know exactly what the Universal Translator is and how it works. Some memorable episodes from the past illustrate what it might be like to not have the gadget available. “The Next Generation” had its “Darmok” and “Deep Space Nine” made everyone laugh with “Little Green Men.” Both shows reminded Trek fans that as our human characters speak English, the aliens are using some other tongue entirely.

“Prodigy” lets kids know right away how the technology works — as Dal talks to himself quite a bit for the first few minutes. He eventually is able to use a Universal Translator to speak with Rok-Tahk (Rylee Alazraqui).

This first episode of “Prodigy” worked so well because of the excellent villains, as voiced by John Noble and Jimmi Simpson. The latter’s character is a robotic enforcer named “Drednok.”

While some speculate that “Prodigy” will be more “Star Wars” than Trek — it is not — the Drednok character is the one connection to that galaxy far, far away which sticks.

Drednok has special powers, which seem very similar to “General Grievous,” who starred in “Revenge of the Sith.” Drednok appears to be a robot of some kind, and he packs an incredible bag of tricks. Those tricks are reminiscent of the robot-creatures seen in the final episode of “Picard” Season One.

The much-anticipated return of Captain Janeway (Kate Mulgrew) is very short. In fact, the Hologram Janeway is activated for only a few moments at the end of the episode.

Kalyani to Malavika, best photos of the week

Is ‘Brother vs. Brother’ Returning for Another Season?

Gauri Khan, Malaika Arora, Karisma Kapoor and ‘famous Bollywood wives’ get together for a glamorous party – Times of India

Jenelle Evans Says She Was Invited to the ‘Teen Mom’ Spinoff

Where Was ‘Love Hard’ Filmed? See Locations & Meet the Cast

‘Giddy up, baby’: Ashley Graham rocks a cowboy hat while showing off her baby belly

What time is Love Island on tonight?

Sense of smell is our most rapid warning system