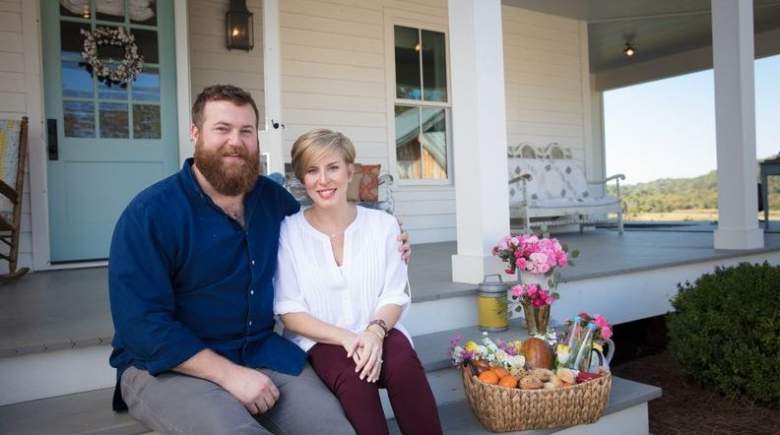 Erin and Ben Napier pose together.

HGTV stars Erin and Ben Napier have been married for nearly 13 years. Fans of their hit show “Home Town” and its spin-off series “Home Town Takeover” appreciate the couple’s on-camera relationship with each other. Erin also shares moments with her husband on Instagram.

On September 17, Erin Napier shared a picture of her and her husband on Instagram. The photo showed the couple posing together. Erin smiled and leaned into Ben, who was wearing a Santa Claus costume complete with a fur-trimmed hat.

Fellow HGTV star Drew Scott responded to the picture by leaving a crying-laughing emoji in the post’s comments section. Quite a few social media users also took the time to comment on the Christmas-themed photo. Some fans suggested that it was a bit early to be spreading holiday cheer.

Erin replied to that commenter and suggested that they were filming something related to Christmas for their show, by writing “it is in TV world!”

While speaking with David Nasser,  former Senior Vice President for Spiritual Development at Liberty University, at the Liberty University Convocation in September 2019, Ben and Erin Napier discussed the start of their relationship. The couple shared that they were introduced at Jones County Junior College and Ben explained that “the first time [they] met was move out day, freshman year” at a McDonald’s. He stated that a “friend of [his] was going to be transferring away so [he] said well let’s get lunch” at the fast-food establishment. While at Mcdonald’s, he ran into Erin and her roommate.

Erin, who had admired her now-husband from afar, revealed that she was “like a nervous wreck” when he approached her. According to the mother-of-two after he introduced himself, she revealed that she recognized him. She told him that she had “seen [him] around campus” and that he “look[ed] just like a guy [she] worked with.”

“The subtext of that was I have a crush on this guy that I work with because he looks like Ben Napier. But I didn’t say that I just said, ‘You look like a guy who I work with,’” said Erin.

“And I’m as slick as they come, I say, ‘Oh he must be really good looking,’” said the woodworker.

Erin, however, replied by saying “I guess.” She explained that she had wanted to say “yes you are and I love you and you smell good” but was unable to do so.

During this conversation, Nasser asked Erin if she has “always been attracted to Santa figures.”

“Yes, no joke she was a huge — her celebrity crushes are Ryan Dunn, Zach Galifianakis, Chris Farley,” revealed Ben.

Erin did not answer Nasser’s question but shared that “when [she] was little [she] did want the biggest stuffed animals, like the very biggest ones.”

READ NEXT: PHOTOS: Chip Gaines Shaved His Head for Charity

Relegation time: The long, dismal death of Match of the Day

The best Netflix hidden gems you might have missed

Danish Siddiqui captured the people behind the story

China aims to eclipse America by 2049, a Biden official writes

Scheana Shay Reveals She Plans to Turn Her ‘Eggs Into Embryos’