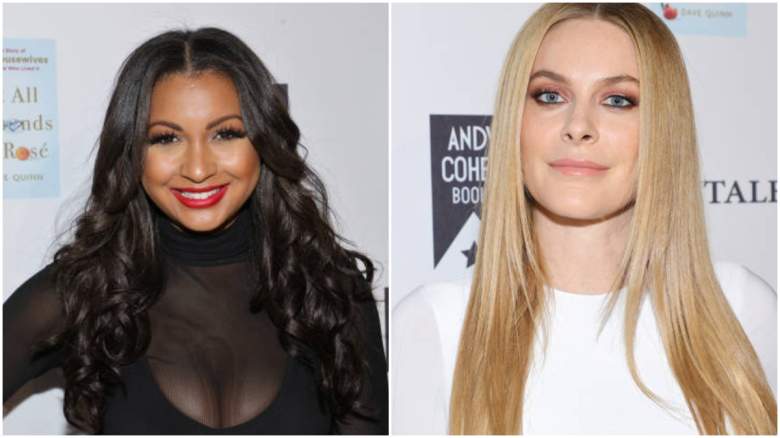 It looks like a feud may be brewing between “Real Housewives of New York” stars Eboni K. Williams and Leah McSweeney.

During a recent appearance on S’More Date’s Instagram Live, Williams played a game of “Sip and Tell,” when the host asked her if she was still friends with McSweeney. In response, Williams seemed to imply that something had gone down between the two of them.

“Oh, you’re messy,” Willaims said on the Live. “You are real messy. Leah and I are what we’ve always been. Friendly colleagues.”

The host then asked Williams, “So you’re not friends?” And, instead of giving a straight answer, Williams just said, “Goodnight,” and pretended to exit the Instagram Live.

During this past season of “The Real Housewives of New York,” Williams and McSweeney seemed to be way more than just “friendly colleagues.” The two appeared to be close friends, and even attended events together outside of the show, like a Brooklyn Nets game in June 2021, which they posted about on Instagram. McSweeney was also the one who introduced Williams on the show this season.

According to Page Six, during the party for the new “Real Housewives” tell-all book, “Not All Diamonds and Rosé,” the RHONY cast had a “pact” to leave before Williams arrived, and McSweeney was a part of that pact.

“Luann, Leah and Ramona had a pact [that] as soon as Eboni showed up, they would leave,” an insider told the outlet in October 2021. “When Eboni entered from the right, they all were on the left and exited. They fled as soon as she walked in.”

However, Williams didn’t seem to mind getting the cold shoulder from her castmates, according to their source. “The infighting in ‘New York’ is still happening,” the insider alleged to Page Six. “They just hate her because they ain’t her. Eboni was amazing, dhe finally met Dorinda [Medley] in real life and danced the night away.”

McSweeney Admitted That She Hadn’t Heard From Williams Recently

Unfortunately, there might be some truth to the feud rumors, because, during a recent interview with Entertainment Tonight, McSweeney admitted that she hadn’t spoken to Williams in a while.

“I honestly haven’t talked to her, haven’t seen her, haven’t heard too much from her,” McSweeney told the outlet. “I think she was traveling? But everything’s OK.”

During the interview, McSweeney also revealed that she would like to come back to “The Real Housewives of New York” next season. That is, if there is a next season. In recent months, there have been rumors of the franchise getting canceled due to the low ratings this past season.

“Of course, I think I would definitely [come back], absolutely, because I really wouldn’t want the last season to be the way I went out, just because it was a weird season with COVID and everything,” McSweeney said at the time.

READ NEXT: Is Jen Shah Getting Fired From ‘The Real Housewives of Salt Lake City’?

At the End of the World, It’s Hyperobjects All the Way Down

You could get paid to become a Sunday roast reviewer